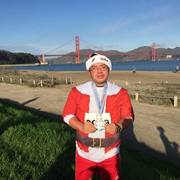 I did the first winter runderland with a great view of the golden gate bridge. There was no rain like my last race. It was a very very small race think the number was under 500 if i am not mistaken. There was the 5k and the 1 miler.

My gripes: no bag check and no water on the actual course. So I just toughed it out with my backpack on my back and just did it. I know a 5k is short but having water on the course is a nice luxury. After the race inside sports basement there were snacks, water and candy. That was a nice touch to have snacks after the race.

I want this race to get bigger and for it happen again. I had a great time. The medal, the cup and the views were totally worth the price of admission!

Link to this review
Login or sign up to leave a comment.
Christopher recommends this race
(2014)
"I chose a race on my birthday"

So I thought it would be a brilliant idea to do a run on my birthday. A 15k no less with a half time in between the the 10k and the 5k (my first ) and to drag my friends along. In the process my friend's husband did his first race ever. Great times!

The course I was kind of bored with. Keep in mind I am used to doing my races along the waterfront of San Francisco and making loops around business parks was just so so. Basically you did 3 laps of the 5k course and i would have preferred 1 long 10k course and then a shorter modified 5k course instead of the three loops.

How it worked: you first ran a 10k, then you get a "half time" between that and the next leg of the 5k. The half time varied from how quickly you ran the first 10k. Some had an hour, some had 20 minutes, some had no half time.

Overall a very well managed race except for the boring course.

Link to this review
Login or sign up to leave a comment.
Christopher recommends this race
(2014)
"I got to jump in puddles!!"

I must applaud the people who put on this race for being so flexible with the inclement weather. At points it rained. At points it was heavy winds. Overall with a very fun race with a view of the golden gate bridge. what more could one ask for? I even jumped in a few puddles.

EXPO: Except for the rain there were a lot of cool schwag to have with both in door and out door. At the end very few people went to the outdoor expo because it was pouring rain and all the shirts and food was inside sports basement.

Do it! it is for a great cause

Link to this review
Login or sign up to leave a comment.
Christopher recommends this race
(2014)
"Running through Levis stadium"

This was my chance to run through the new 49ers stadium and practice field in santa clara and it was a great experience. The race is actually 4.9k to go in concert with the 49ers theme versus a traditional 5k. You get to run across the entire stadium all the way around, you see where they practice, park their cars and play. it was an incredible experience. The finish on the field was sweet! Since it was the start, the expo quality was okay. not too much to see. DO IT!!

Link to this review
Login or sign up to leave a comment.
Christopher recommends this race
(2014)
"Turkey day trot"

A surprisingly difficult course with great views of golden gate park. We ran though trails, grass and through asphalt. The few hills we climbed were muddy and challenging. The shirts were amazing and you had the turkey hanging around. do it next year!!!