Christopher recommends this race
(2015)
"I ran across the golden gate bridge!!!"

My second half marathon and this went much better than my first. I shaved 25 miuntes off my time and did not cramp through out the whole thing!!

The course was a very brutal one but worth it for the scenery alone. The race started up a hill. Then looped up to the a bunch of hills. Then took you over the golden gate bridge and back and finished in the civic center.

Pre-race: The expo was nice. Lots of samples and lots of stall to buy goodies for your race.

The shirt was a moisture wicking brooks shirt and was very comfortable.

Aid stations: plenty of gatorade and water. They also had gu which was a total life saver. That Gu got me though the last 3 miles of the race to finish strong; mostly because I was so buzzed from all the sugar I had in my system at that time.

Not too many bands playing but It was early morning and the city has quite a few noise ordinances in place so I totally understand.

Post race festival was incredible! There was plenty of food, beer and lots of sunshine. Lots of places to stretch out and rest. It was in the civic center with a great view of city hall.

This is one race to really do! I mean what other race can you run across the golden gate bridge and basically run though San Francisco?

Login or sign up to leave a comment.
Christopher recommends this race
(2015)
"Hanging out with super heroes and villains"

A fun if uncoordinated run. A very small local run. with a great view of golden gate bridge.

This race had a slight loop. A good race really should not loop. I really hate races that loop. It makes the race boring.

One major positive: it brought out families and you had people dress up as their favorite super heroes. I was iron man and it was just so fun to see people dressed up while not during halloween.

The medal was pretty cool as well. Getting a cape instead of a shirt was a very nice touch. I am no fan of non dri fit shirts

The announcements were too quiet on the bullhorn. Needed an actual sound system for this race. No actual waves were to be found during this race. I started when the race began.

This race needed more coordination than volunteers to manage and mark the course. Arrows were no good after awhile. It honestly felt at times comical. It can be done better. I would do the race again.

Link to this review
Login or sign up to leave a comment.
Christopher recommends this race
(2015)
"My first half marathon" 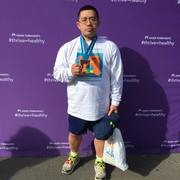 So I finally went ahead and did my first half marathon and it was a doozy.

The only major issue was a lack of training of my part. But hey I still finished! Cramps miles 9-13.

I highly recommend doing this race!

Link to this review
Login or sign up to leave a comment.
Christopher recommends this race
(2015)
"Another race with great views"

A very small and short race.it was about 300 people registered for the race. All to benefit special olympics. What more can you ask for? Sunny day and views of the golden gate bridge.

Fun race. Afterwards a bunch of people paid to jump into the water.

Link to this review
Login or sign up to leave a comment.
Christopher recommends this race
(2015)
"The sweetest race in San Francisco" 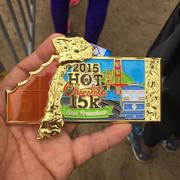 This was my second 15k. First 15k without a half time in between. I really love this one!

This race blew most of the other races out of the water. It was organized down to the smallest touch. They even gave you a little something to fasten your gear tag to your gear. What other race gives you chocolate, before after and during the race?

Schwag: With your registration you get a jacket. A jacket while most races are giving cheap cotton shirts they are giving you jackets. nice jacket too. The end you get a cup to eat your chocolate with.

Bling: The medal was amazing! it was a chocolate bar! with a bite through it.

The course was nice.We started at the deyoung area, then looped though golden park, to the great highway and back to the park. With that we had views of trees and the ocean.