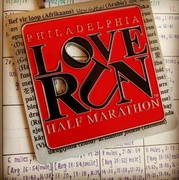 The Philly Love Run 2017 was my first half-marathon and I couldn't have asked for a better race to be my first! My experience from start to end was top notch and I literally have no complains. Let's dive right in:

Before the race:
1. Race Communication: This was my first race of such humongous magnitude. I really didn't know what to expect and it all seemed pretty intimidating. But, all race communications in the weeks leading up to the race really put all my anxiety at ease. Everything was explicit and clearly communicated.
2. Race Expo: I visited the expo right at hour zero, which was held at the Philadelphia Convention Center. There were a bunch of vendors and I made a cursory glance. There were a bunch of photo ops too. Packet pick-up was a breeze through for a race of such huge magnitude. Packet pick-up was held on two days for 5-6 hours each giving plenty of time for out-of-towners to drop by.
3. Best Swag Ever: Agreed I haven't run a huge race before, but a full sleeve shirt AND a coffee mug, free training plans, vanity bibs (mine read: The Time Is Now) not to forget the giant medal and FREE race photos is more than enough to give this race a 10/10. Nope, you're not dreaming. All race photos are free!!! Also, if you register early enough, the race can be really reasonable ($59-65) for all that your receive. Don't you love when it's a two-way street?

Race Day:
1. Racing options: The Philly Love Run had both an option for a half-marathon and also a 3-member relay team. Although, we ran the whole course together, the leg exchange points were so clearly directed on-course.
2. Course: I loved the course. Being my first half-marathon, it helped to know that this year had lesser hills and for the most part, running flat made my race even special. Majority of the race went by the Schuykill River. Who can complain about good views with water by your side for a good 8ish miles. Am I right?
3. Aid Stations: Every two miles, there was water and gatorade for the runners. I didn't find them crowded at all and the volunteers were on their toes. I believe there was only one Gu station, somewhere around mile 10 - 12. It might have helped to have an addition station at mile 6 or so.
4. Porta Johns: In plenty!! At the start line and also during the course. On course, I did notice some of them had lines. But, there were ones with no lines as well.
5. Overall Crowds: They were phenomenal! Plenty during miles 1-4 and around miles 7-8 when that beastly hill was on and we needed some encouragement.

Post-Race:
1. The finish line was definitely pumping with energy. I received my medal as soon as I was done along with a heat blanket. Volunteers were really helpful in directing us and helping anyone in need. Penn medicine was ever present for medical support.
2. Fueling: A snack goodie bag that included a bottle of water, Philly soft pretzels, Banana, Nesquik Chocolate/Vanilla milk and other goodies to fuel you right away!
3. Free Photos: I received mine within 24 hours. I mean, don't we social media fans need it right away??
4. Plenty of Photo Ops to brag your success!

Link to this review
Login or sign up to leave a comment.
Madhuri recommends this race
(2016)
""Inaugural Race 13.1 Baltimore""

It was Race 13.1's inaugural race in Baltimore and I was looking for a 5k right before I jump into spring half-marathon training cycle. And the timing seemed more than ideal. So I decided to give it a shot.

Before: Being the inaugural race, I felt all instructions were neat. Although, packet pick-up wasn't the ideal. One of the locations was in the county, which seemed quite inconvenient and the other was at the Canton Waterfront Park, which also happened to be the race start/finish. That was definitely a better option for me. It would have been nice to have more volunteers for packet pick up. But considering the windy weather the night before, they did do their best to keep it really quick and efficient. Right before the race, it was nice to see plenty of porta johns and clean! I took an Uber to and fro. But, I heard there was plenty of parking. The half started before the 5k. So, it seemed a little chaotic and it didn't seem like the half marathoners had any seeding. I am a back-of-the-pack runner. So, it's always pretty simple for me to find my spot.

During: What I loved most about it was the course. Most of Baltimore's races are around the Inner Harbor. But, this race was going through the Canton Waterfront and that's what made it different. I did the 5k and so about half of the course involved running by as close as hugging the waters. Loved it! I heard the half-marathoners had some pretty scenic routes too and got to run by the Under Armor Headquarters. Pancake flat course! Volunteers were GREAT throughout the course - good aid station (mid way for the 5k) if I remember right and also, to help us out with directions.

After: I say it again, but, the volunteers were great and although I did the 5k, they were kind enough to offer me a heat blanket due to the really cold temperatures and that crazy wind!! They had a good variety of after-race snacks from Panera, which totally hit the spot. Overall, there was plenty of space after the race to hangout by the waterfront to cool down and fuel before heading out. If the temperatures weren't this crazy, I would have stayed back a bit longer.

Others: I think overall I loved the race. I would have loved to see more people sign up. I guess we could expect more people to join in if the race was sometime in January rather than December, considering fall racing season just wrapped up for most runners and of course, Thanksgiving! I loved the shirt! It was black with Marylander colors of red and yellow. I couldn't rep it since it half-sleeved, and quite not ideal for the season. Overall great race and would recommend it to all.

Link to this review
Login or sign up to leave a comment.
Madhuri recommends this race
(2015)
"Girls Run The World - for sure!"

The BWC 5k in 2015 was one of first few 5Ks that I was a part of and I am going back to race it again in 2017. The highlight of this race is that it is an All Women's race and the second largest in the Mid-Atlantic Region. The race has a special cause and benefits organizations that are aimed to improve the holistic well being of cancer patients and survivors. That was what drew me to the race. Having physically and mentally strong women of character and perseverance gather together and support one another on race day, is a sight of its own. The race is definitely more about camaraderie and love!! Having a nice wet towel and rose at finish line is definitely a nice touch. Not to forget the cool watermelons on a nice hot summer day. It's the only 5k race that I have participated that has a medal for finishers. I guess, the medal is symbolic of the heroes in each one of us. I definitely would recommend this race to all women, near or far, old or young, to join in. You will not leave the place without feeling that you are part of a wonderful running community! I can't wait to race it once again in June 2017.