Yves recommends this race
(2018)
"Night Run out of Fort Wellington"

Course is mostly flat along the river with some small elevations away from the river. Course starts and finishes at Fort Wellington.

This is the second year of the run. Great night run out of the historic Fort Wellington, a fort of the battle of 1812 along the St Lawrence River.

Well organized, registration, course marshals, water tables, medical; all were there and happy to be there.

Tons of bling. School children designed the medal featuring a fort and light house along the river. Tech short provided with a logo on upper left of chest with logos of sponsors on back. Grab bag had post cards of the fort, info on Prescott, chocolates, a head light, glow bracelets. There were draw prizes such as bottles of virgin olive oil which I won.

Well done and lots of fun to run along to river. I bet this race would be spectacular during the day as well.

Link to this review
Login or sign up to leave a comment.
Yves recommends this race
(2017)
"Military race in Ottawa " 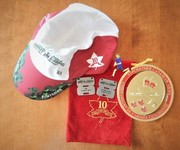 Swag for the Commander Challenge ( 5km & 21.1km) Two shirts - one long sleeve for winter as it is lined and another t-shirt. Both high quality with green camo and grey with Army run logo, along with year. Both look very good. Medals for each race were military-like dog tags AND the huge commemorative medal for all finishers along with a high quality finisher cap.

Aid stations were excellent located at every 3km with electrolyte, water and potties. There were sponges, mist sprayers and gel later from 12 km onwards. Volunteers were amazing. Had a friend who had troubles and the medics took care of her to help with her difficulty. Went well.

Course scenery is quite fantastic especially if you are from out of town. Run in both Ottawa Ontario and Gatineau Quebec crossing the bridges over the Ottawa river. Run by Rideau Canal, a world heritage canal, the Parliament buildings, various museums, old Gatineau, and the Governor General's grounds and in posh neighbourhoods. I live here so I have seen it all before, but for the visitor it is very different and iconic for them.

Terrain is undulating with long slow climbs along with some steeper ones and there are the long downhills too. It is challenging so don't be fooled by descriptions that it is flat. It is not flat.

Well organized with 20,000 runners! Organized by the military so it better be well organized. Lots of fun.

Link to this review
Login or sign up to leave a comment.
Yves recommends this race
(2017)
"Flamingos and Giraffes along with Hippos smiling as you run. "

Swag (below): Tshirt & finisher medal. Tshirt has a photo of a panda, a visitor from China until 2018. Material was black and soft tech material. Great to wear without feeling sweaty. Medal had emblem of pandas with a colourful ribbon. Both high quality.

Lots of water every 3 km for the 10 km as well as electrolyte. Pottys at every station. Arrival had yogourt, bananas, bagels and energy bars along with water & nuun and Oasis electrolyte fruit juice.

Post run, meeting up with Olympians such as Lanni Marchant. Other elites were also present so says something about this race.

Organized by Canada Running Series which is an excellent organization that knows how to run races. They organize a series of high quality races across Canada. See http://canadarunningseries.com/ You will be impressed. Not much better than this

Course scenery is the Toronto Zoo. What else could be more fun than running by giraffes, flamingos, elephants and hippos. Lots of trees and hence shade. Course is filled with short twisty hills so it is challenging if hills are not your thing. Give you a reason to train for hills and make you a stronger runnier.

Tons for free parking but arrive early to avoid the traffic. Races start at 8:00 am so be there for 6:30 to get the best spot. Easy to get to the zoo by subway or car.

Link to this review
Login or sign up to leave a comment.
Yves recommends this race
(2017)
"One of the best races in Canada"

Swag was excellent for Canada's 150th year celebration! Shirt was white tech cloth with red profile of iconic building both in Ottawa on one side of shirt and of Canada on the other side of shirt. Medal was special in that the maple leaf in the centre spins around. Quite unique.

Aid stations set for every 3 km with water and electrolytes and pottys with gels, sponges and misters beyond the 12 km. Great volunteers serving those. Medics excellent as usual too helping runners in distress.

Tons of people cheering all along the route, some with sprinklers, freezies and hoses to help beat the heat. Well appreciated!

Scenery in the Canada's Capital is special with many iconic buildings and monuments, bridges, rivers, Rideau Canal, a world heritage canal, Lot of trees to offer shade and relax the soul. A very pleasant course with lots of variety!

Highly recommend to any runner. Many international elite runners trying to earn the big dollars if they break records. Earnings can be huge if they are successful.

Link to this review
Login or sign up to leave a comment.
Yves recommends this race
(2016)
"Energy filled half. "

Really enjoyed this race in spite of the downpour at the start. The shirts designs are art. The post run party was filled with give aways, food, hydration and great live music at the city hall. Biggest negative for me was the parking, but that is because I don't like parking garages and their costs (better than being towed I guess). Great atmosphere and friendly racers.