Write a Review
What did you think of the race? Share your thoughts! Write a Review
Preston Ramsey recommends this race
2018
"When Pigs Fly!" 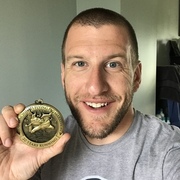 The Flying Pig Marathon is quintessential Cincinnati. For 20 years, this race has been almost like the unofficial start to summer, taking place the first weekend in May every year. And, like clockwork...I've avoided it.

I avoided it because for two reasons - 1) the hills of southern Ohio are not friendly and 2) I felt like people hyped it WAY too much. Well, I'm not COMPLETELY wrong about the hills - they still suck, but they aren't nearly as bad as I feared - but I was WAY off about the hype. Over the course of my brief time in Cincinnati, this race more than made its point and earned its spot as one of my favorites.

I only signed up for the full marathon, but I know plenty of people who did the 3 or 4-way challenge (some adding the "extra cheese" option). Having run a 5k the day before this race and three other races within the last two weeks prior, I felt only running one race was good enough for me! The plan going into this race was simply to FINISH - nothing more. As I'll talk about a little further down in the review, that plan changed a little.

As for a breakdown of the Flying Pig Marathon event in general...

COMMUNICATION (leading up to the race): Pretty darn good. Enough emails to stay informed, but not so many as to drive one crazy. In addition, the race's Facebook / Twitter / Instagram accounts were always spot on with kudos to those training as well as providing in-the-moment updates about various aspects of race weekend. An added bonus under communication would be the Flying Pig Marathon APP. This little gem not only kicked out notifications about the event, but also provided access to the event web material and live runner tracking.

RACE DATE / WEATHER: The Flying Pig Marathon takes place annually on the first Sunday of May. In Ohio. This generally means the weather could be a huge crapshoot in regard to what could happen. Thankfully, the first half of the race (for me, at least) was pretty comfortable, though it did heat up a little bit closer to 10:30/11am. For reference, the race began at 6:30am.

EXPO: The expo for the Flying Pig took place at the Duke Energy Convention Center, which - like so many other things about this event - was incredibly easy to access. I rolled into Cincinnati the day before the race and I was concerned primarily about parking, how to access the expo, how far away I would be from the start, etc. All those concerns went out the window when I got off at the exit for where I was staying and immediately saw the convention center! As for INSIDE the expo, plenty of signage and volunteers made this expo very easy to navigate. Like other marathons, I received a clear plastic gear bag which normally doubles as a "shopping bag" during the expo. However, the primary race sponsor (Proctor & Gamble) had an area on the expo floor where they were distributing free samples of P&G products - Tide, Gain, Olay, etc - and a large nylon laundry bag!

PARKING: For me, parking was a breeze. I parked in a garage right next to the hotel and did not have to move my car until I left to come home. The hotel/garage was within about a mile - maybe less? - of the start line. Needless to say, no headaches with parking for this guy!

COURSE: This course had everything one could want in a really good marathon - just the right amount (and size) of hills, crowd support, plenty of traditional (water/Gatorade/Gu) and non-traditional (graHAM crackers, SWINE & CHEESE station, and - of course - BACON) aid stations. The amount of crowd support along the course was actually quite surprising. At no point did the race have any overly significant "dead zones" with zero crowd support. In fact, there was one specific area, near the easternmost point of the course, where spectators set up a huge block party between a few houses with easily over 150-200 people at this one spot. It was cool to run through as this was one of the most populated cheering areas AND by far the loudest!

MEDAL: The medal for the marathon is a double sided medal (photo below shows the front) with the reverse of the image on the back side. What's that mean? It means you're looking at the backside of a pig on the backside of the medal!

OTHER SWAG: All race participants received a technical race shirt, a poster celebrating the 20th anniversary of the race, an indoor/outdoor travel blanket, and a black finishers jacket with an all black Flying Pig Marathon logo. Genuinely, I walked away from this event with so much more than what I anticipated! If you are thinking of running the Flying Pig - especially if you're doing the multiple race challenges - make sure you pack accordingly and have room for all your swag!

MY RACE: As I stated at the top, this goal for this race was to FINISH. Two weeks prior, I had run the Glass City Marathon in Toledo, where I 1) completed the race I DNF'd in 2017, 2) ran the entire distance without walking, 3) broke 4 hours for the first time ever, and 4) as a result, I ran a PR of 3:58:12. I had hung with the 4 hour pacer for the first 5 or 6 miles before I just decided to go a little more by feel than by pacing. Well, that feeling had me passing the pacer within another mile or so and not ever looking back! When I got to mile 20 in right around 3 hours, I knew there was a possibility of breaking 4 hours again, but had no idea I would be anywhere close to running another PR, especially on an unknown and hilly course! However, it became clear when I got within about a mile of the finish that I was going to PR - but it was going to be VERY close. I ended up finishing in 3:57:23 - nearly PR'ing by a full minute.

***
I came into this experience with many preconceived notions of why I was not excited to run the Flying Pig, but I am SO very glad that I did. Yes, the hills are tough, but they are manageable - which is why we all put in our hill training, right? Even if all the SWAG is removed from the equation, this race is well worth the trip simply based on the organization, the support (from the organizers, volunteers, crowd, and so on), and the general atmosphere. Cincinnati really gets behind this event and it shows.

If you have the opportunity to run the Flying Pig Marathon (or any of the challenge series races), I highly recommend signing up and getting "piggy" with it!