There's a 5k and a 15k event. I did the 15k race with a friend while visiting Charlotte. The Whitewater center is an awesome place that offers not just trails, but whitewater rafting, zip lines, rock climbing, a restaurant, etc. I had no idea what to expect when I got there, but was very happy to see such a great turn out. The trails were bike trails through the woods, so the majority was shaded which was good because it was an extremely hot and humid day. After 9 miles, everyone looked as if they had just climbed out of a pool. It was very different for me to run trails with real dirt and tree roots - quite different from the rock and sand of Arizona that I'm used to. There were some decent hills to climb/descend and a few technical areas to maneuver. My friend picked up my bib & t-shirt for me the day prior, so I can't really speak to that portion of it, but I don't believe there was any type of expo. Salomon was at the race and had a great selection of trail shoes for anyone that want to use a pair to try during the race. Personally, I can't imagine trying a brand new pair of shoes out during a race, but lots of people did, and I thought it was pretty cool that they were there. The t-shirt was nice - great quality, made in the USA and made sustainably/green. Not a tech shirt, but still one of my favorite shirts I've gotten at a race. I wasn't impressed with the awards - they were just printed certificates - not the greatest thing to hand someone when they are dripping in sweat! I placed 3rd in my age group which earned me a certificate along with a $10 gift card to a local run shop that I never made it to. Personally, I would have rather had a medal to hang on my medal rack. Aid stations were adequate - there were 4 of them and they had water and gatorade. I don't think they offered food, gel or chews. I carried my own water, so I didn't stop at any of them. There were porta potties at the start/finish line, but none throughout the course. The course was a little confusing, but it was marked well and I never felt lost. Overall, I thought it was a great event and I would definitely do it again.

Link to this review
Login or sign up to leave a comment.
Jami recommends this race
(2014)
"Great Tucson 10K" 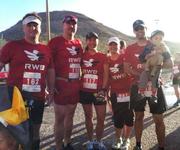 This is an annual race in Tucson. Southern Arizona Roadrunners (SAR) does a great job putting it on every year. I ran it in 2013 and 2014. I put the elevation difficulty as a 2 - there are lots up rolling hills - it's far from being a flat course, but the hills are not terrible. Probably not a course to go for a 10K PR. The course goes through a nice area of town near a resort, traffic is well managed and there's a couple water stations.

Tech shirts are nicely done and offered in ladies and mens cut/sizes. SAR loves to recognize racers wearing their shirts, at races and around town too, so this is a race where you'll see many people wearing the actual race shirt which is sort of cool to see.

There's awards for overalls and age groups, and always a great after-race party which includes breakfast burritos, mariachi band, pinatas and jumping castles for kids, and Eegees (for those not from AZ, those are like slushees) People always enjoy this race.

Link to this review
Login or sign up to leave a comment.
Jami recommends this race
(2014)
"Great Cause, OK Race"

This is one of those races I did only for the charity/cause. It's not a chip timed event. Also, it's not a trail event as the description says - it's done around Reid Park on sidewalks/roads in Tucson. So, the scenery is not terrible - nice park views, but nothing exciting. There is running done on sidewalks along a couple of major roads, so the scenery is basically traffic. There was one water station around mile 1. After the race, you could grab a chik-fil-a chicken sandwich or a granola bar or a banana. Drink options were bottled water or iced coffee/tea. The shirt is a regular mens cotton t-shirt - no fancy design. It really is a fantastic charity/cause.

Link to this review
Login or sign up to leave a comment.
Jami recommends this race
(2014)
"Fabulous Trail Race!"

This is really an amazing race. It's a 5.2 mile loop through the beautiful Catalina state park. There are a few technical areas and steep hills, and about 100 stairs to climb. You can opt to do the loop once (5.2 miles) or twice (10.4 miles). It's mostly single track, so try to place yourself in the starting line up accordingly as there's not much time to get past people in the beginning.

Lots of water/aid stations for a relatively short race. They were all manned by Team RWB - lots of cheering along the path.

There were medals for those that placed - overall and age groups. Everyone got a nice tech shirt. Breakfast served after the race - breakfast burritos and chocolate mile/juice.

One of the great things about Everyone Runs Everyone Walks races is that the photographers are all volunteer. Race photos are fantastic quality - very professional - and FREE! These are always fun events! Highly recommend!!

Link to this review
Login or sign up to leave a comment.
Jami recommends this race
(2013)
"Great first half!"

This was the second half marathon I ever did. It was a fantastic course as it's almost all down hill. It's a point to point race which is great - I don't like to back track during a race. I signed up for this one because it was close to home. I ran it by myself. The expo before the race was a decent size. There were probably 15-20 vendors set up with a good selection of merchandise. The race packet didn't include much - a tech shirt and a couple of Gu's. The tech shirt was white and the design wasn't bad, but only mens sizes, so it didn't fit me very well. If I had known I would've sized up and given it to my husband to wear.

There is no parking at the start line for the half at this race. There was plenty of parking available with shuttle buses though. I got there early and was on the first bus out and when we arrived to the start area, nothing had been set up. The bus simply stopped where there was a row of porta johns. After a dozen more buses showed up, we were asked to get off our bus as it was to be used as a drop bus for drop bags. It was a rare morning where it was actually cold and misty out in Tucson, so none of us were too thrilled about getting off the bus. It was another 1/2 hour before the race personnel showed up to set up the start line, and start up the music. By the time we started, we were all ready to get moving! This was really the only part of the race that was disappointing, and hopefully they learned from it and improved it.

The course itself was great. It was all down hill except for one short uphill. The small hill wasn't bad though as there were cheerleaders (men and ladies) lined up the hill cheering you up it. The aid stations were fantastic. All were well manned and had plenty of water and gatorade and also Clif Shot blocks and gels. The scenery wasn't bad, but nothing terribly exciting for anyone that lives in Tucson. The finish was great. The finisher medal was very nicely done and is probably my favorite so far. There was lots of food at the finish - chocolate milk, cookies, fruit, pb&j sandwiches, water and emergen-C packets. Lots of photographers throughout the course and at the finish.

Overall it's a great race and I would definitely do it again. Thinking of doing the full this year as it is a downhill course.