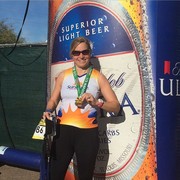 This was my 4th time running the PF Changs Rock n Roll Arizona Half Marathon. It was by far the smoothest experience I've had to date. I signed up immediately following last year's race, as this race series can get extremely pricey!

Communication from race management was good as the race approached. We had a major scare a few days prior to the race when we received emails saying that we might not get the medals in time. I did think it was great that they gave us a heads up - it would have been a major PR disaster otherwise. Luckily, the medals arrived on time!

The expo itself was well organized, but not as robust as I've seen at other RnR races. The shirt is good quality and the medal is even sweeter because we appreciated having it all the more at the finish line. This year they started a 4-year medal series where each year the medal is part of a larger medal. If you collect all 4, you'll have one really large medal made up of your 4 achievements. Pretty cool!

I avoided the parking headaches this year (it's always a nightmare) and took light rail. Best decision ever.

The start line experience went so much smoother this year than in previous year. The corrals were not crowded, and I never really felt like I was having to work hard to dodge people along the way, despite having over 20,000 runners. It really spread out well.

The course is flat up until mile 9 ish, but since it's also the most scenic part, it does provide some distraction. There were tons of cheer stations and spectators which helped keep our spirits lifted.

I felt that the finish area was a bit chaotic, since the half, full and 10k all finish in the same place. Very crowded. But once you got through it and headed towards the concert stage and beer garden, it was more spread out. This race brings out a lot of out-of-towners looking to escape winter. It was picture-perfect weather (near 70 at the post race concert), and there were lots of people taking advantage of the vast choices for post-race noshing at the restaurants along Mill Avenue.

Getting your official results was not the smoothest experience. I talked to several people who couldn't find their results on the website. Once I did find mine, I was dismayed to find out that my results were listed under the 10k results - very frustrating! I would love to see QR codes on our bibs where we could instantly get results.

Link to this review
Login or sign up to leave a comment.
Emily White recommends this race
(2014)
"Brand new local race"

This was the first year for this local race. There is also a half marathon and they are hoping to have a full marathon next year as well.

There were a few hundred running the 10k. It started at Crossroads Park and did a U-shaped route basically down 2 miles, over 2 miles and up 2 miles. We ended at the Civic Center, where they had a decent spread of vendors set up.

The packet pickup offered a few alternative dates and locations. I went to Cadence Running, which is really small and not set up for a packet pickup situation. On race morning, they delayed of the start by 17 minutes so that the lead half marathon runners could pass by. It seemed rather pointless, as we literally cheered on 2 runners. It was cold out and we just wanted to get started.

That being said, they have nice medals! Yes a medal for a 10K! The half marathoners had a totally different medal design, almost like it was from a different race entirely. The shirts were an extremely bright neon yellow/green, but that didn't stop most people from wearing them for the race.

The one negative is that 10kers ran a point to point race course and had to be bussed back to the park where we started. That required a 5-10 minute walk through an unkept field over to a nearby parking lot. They were pretty much on schedule, so that helped.

All in all, I would do it again. It was fairly well organized and had that small local race feel.

Link to this review
Login or sign up to leave a comment.
Emily White recommends this race
(2014)
"Cool International Marathon!"

This was a well-organized marathon/half marathon event. Plenty of pre-race communication regarding logistics for race day. The organizers are very involved in social media, which was fun. The expo was decent, but crowded.

This race gives you the unique opportunity to run into another country! We start off in downtown Detroit near the river. Unfortunately the half and full start at the same time so it is quite crowded, event with the wave start. The route takes you over the Ambassador Bridge into Canda, along the water, and then back through the tunnel into the US. Then you continue through neighborhoods and onto Belle Isle.

The shirt was a great tech shirt with the course outline on it. We share the course with half marathoners for the entire first 13.1 miles of the race, so the crowds don't thin out until after that. I was surprised to see that there weren't any time clocks except for the half way point and the finish. There were plenty of aid stations, water, gatorade and gels given out. Also the opportunities for beer, bourbon and bacon along the way! Parking was also a real challenge. Practically every major road coming into downtown was closed, and we had the added challenge of a home game for the Detroit Lions at Ford Field near the finish line, so it made getting out that much worse.

Detroit gets a really bad rap, but this race is worth doing! Nice scenery and check out this beautiful medal! They change the car on the medal every year.