Anthony Galvan recommends this race
(2019)
"Another race around White Rock"

I ran this race just a couple weeks after running the Tupelo Marathon. It sort of killed my legs. Oh well.

No expo, just packet pickup. It was at Luke's Locker. It was fine, but the Luke's by SMU has a small lot that is always full. Not a great place for packet pickup. The participant shirt is nice though.

Overall, it's just another race around White Rock lake. The scenery is good, but it's where I train, so it's nothing special IMO. This race actually does a loop all the way around the lake, unlike the Run Project races that start and end at Norbuck. Parking is probably much better at the Arboretum than for the races at Norbuck, but I didn't use it.

Start was at 7am, which is great even this late in Second Summer. There was no breeze and it was humid. The start line was fine inasmuch as there was room to mill about before the start and plenty of porta-potties. On the other hand, the start/finish line, itself was not very well marked. It was kind of lackluster compared even to DRC races at the lake.

The medal was okay and the finisher hat is a hat. I can't give this race low marks because it was inexpensive and had all the trappings of a big race (nice medal, nice shirt, finisher hat, HUGE vendor area at the finish). I think this race just isn't for me. I'm not sure why.

Link to this review
Login or sign up to leave a comment.
Anthony Galvan recommends this race
(2019)
"Small Town Race, Challenging Course and Weather" 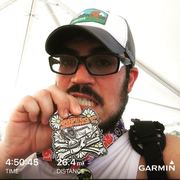 Anytime I mentioned this race to anyone the first thing they said was "you're going to run a marathon in Mississipi in September?" I'm from Texas, so I knew what I was getting into, but it was hot.

The race started at 5 am (all races should start at 5 am) to get out ahead of the sun. That said, the sun was in full force by the time I was at mile 16 or so. and the last 8 miles are pretty much in full sun. The course is hilly, but "rolling." That is to say, it doesn't have any monster hills like Little Rock, but you are constantly going up and down. The website lists the elevation gain at 735. My watch logged 1,925. The course, itself was well marked, but nothin special. It was mostly on highway/FM roads that were still open to traffic. It's an out and back that take you almost to the finish line in a circle and then turns back. The course was very dark before sunrise, and many runners had headlamps. I kind of relied on those other runners because I didn't want to carry a headlamp when the bulk of the race (for someone slow like me) would be in daylight. If I did it again, I'd probably just wear some glow bracelets or use one of thos hat clip lights they sell at Wal Mart for $1.

Between the darkness and the road choice, this race is not scenic. There aren't even cool features like random bridges or anything that you might see or run over. The start was barely marked on the road that runs behind Trails and Treads - a local running and cycling store). It's a gun start, so the only mats are at 13.1 and 26.2. Everyone has the same start time. Finish was just a little further down the road behind Trails and Treads.

Post-race loot was good. The medal is AWESOME. This race has great medals. The beverage choice was good. I think I had a Mich Ultra, a Powerade, 2 waters, an orange juice, and 2 chocolate milks. Worth it. The BBQ was kind of meh.

The aid stations are fine, and I salute the volunteers who manned them. They were doing their best, but there weren't enough volunteers. I wore my Orange Mud Double Barrel in anticipation of this and I was very glad I did. It was also super easy to fill up at mile 21 from one of their Gatorade jugs. There was one aid station that had ice pops though....that was clutch! I never really thought about ice pops on the course, but this is my new favorite thing.

It's a small race. There was no expo, just packet pickup. The Tie-dye shirt is cool. The medal is GREAT. Race organization is solid, but it's a spartan race. That said, there are a lot of runners from surrounding states who run this race every year, so it's clearly a regional favorite. I love the motto "trample the weak, hurdle the dead." It's definitely a challenging race that feels like a real accomplishment between the heat and the hills.

Link to this review
Login or sign up to leave a comment.
Anthony Galvan recommends this race
(2019)
"Pretty good little summer race" 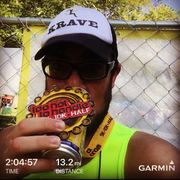 Run Project puts on a pretty good race for the price. There's no expo; I picked up my packet a local Lululemon store. That was fine. The biggest problem with the race is parking. You can pay extra to park near the start/finish. Otherwise, you're either street parking or walking a long way. It's not a big deal, but you have to budget your time.

The swag this year was a tank top and a hat. The tank top is nice, but it's black. I would have preferred red or orange (the race's other colors) just because black is hot in the summer and too dark for a morning run. The hats were delayed from China. They say they're going to mail them directly to us when they come in. Probably not their fault, but who knows?

The course is around White Rock lake; the scenery is nice, but it's also my normal route so it's nothing special. It is not challenging at all; there are only a couple of "hills" on this course that sort of straddle the midpoint. They are 50-80 foot climbs. It's an out-and-back, so you get to go down them as well.

Aid stations had Nuun, which I like personally. The spacing of the aid stations was fine. I volunteers were okay, but sometimes they were a little under staffed. That's ok for the price.

Post-race was good if you were in the beer corral where they had 26.2 beer and that new spiked seltzer water stuff. But outside of the beer area, it was not so good. Lots of bottled water, but by the time I finished (2:05) many of the tents had been abandoned, including the Hoist tent.

Overall, it's a good race for a fair price. It was super hot though, and the 7:30am start seemed late for a July race. I'd love a 5am start, but I'd settle for 7am.

Link to this review
Login or sign up to leave a comment.
Anthony Galvan recommends this race
(2019)
"Big Time Race in Little Rock"

What an amazing experience, let's round up the facts:

EXPO: the expo was at the Little Rock convention center. It was really easy to get to and the expo was pretty much exactly what you would expect of a major race. There were lots of vendors, free stuff, and the LRM merch was varied and plentiful. Packet pickup was easy and everyone working the vent was great.

RACE DAY: the weather was supposed to be pretty crummy. It was cold and when we left our hotel at 6am or so, we had the wipers all full blast. I was not looking forward to running in the cold rain. More than that, I feared WAITING in the cold rain. But the start/finish line was right outside the convention center, so the waiting totally happened indoors and out of the cold and rain. This was AMAZING. Also, the convention center had both porta-potties and real terrestrial restrooms, so that was nice before the race. Everything about the pre-race was top notch!

COURSE SUPPORT: The water stations for this race were also top notch. They had water and Nuun at every station, but also Hammer Gels at some of the later stations, as well as oranges and bananas. In between official water stations were MANY MANY unofficial ones with beer, mimosas, donuts, pineapple, tater tots, PBJ. The support for this race, both official and unofficial were the best I have ever experienced.

THE COURSE: Hills. Hills. Hills. This is a challenging course. You know it's going to be hilly, but when you get to the halfway point you're thinking "this hasn't been so bad." Then the real hills punch you in the gut. miles 14-16 are BRUTAL. Then you get an insane downhill that feels like falling off of a cliff. As long as you enter this race understanding how unlikely a PR is, you'll be fine.

Overall, this race is just incredible. The course is brutal, but the challenge and the support make it all worth it. The medal is amazing, if cheesy and kitschy. It's all part of the LR charm. This race is a MUST. No question. The chicks in charge put on an event that has all the charm of a small town and all the support and pomp of a big-time race.

Link to this review
Login or sign up to leave a comment.
Anthony Galvan recommends this race
(2019)
"Great value local race" 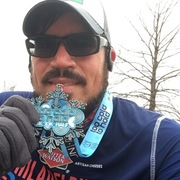 Race day was pretty cold. I had to go with tights and long sleeves. Pre-race included an Orange Theory trainer doing warmup, so that was actually pretty cool. Also, the long sleeve pullover is pretty awesome, and the medal is nice for an inexpensive local race.

The start/finish is at Norbuck Park, which has basically no parking, so parking was a bit of a pain. I probably walked a mile. Aid stations had Nuun, which was good, but other than that they were pretty unremarkable.

The course takes you from the park to White Rock Lake in what is mostly an out and back. Almost the whole course is part of my normal training route, so it’s both familiar and unremarkable.