I ran this race virtually last year and was finally able to run in-person in 2022. Here are a few highlights:

Expo
I thought the expo really was in a scenic location on the Broadway Pier and I couldn't believe they were giving out Oreos and Hot Chocolate at the Expo! I guess you need to try out the on-course fuel, though. Honestly, did I need to run after getting free cookie and chocolate? Thumbs up from me.

Swag
These Hot Chocolate races give you basically a full-on jacket as race swag. This year's was better than the last I think with a little quilted action happening in the front and lots of zippered pockets. I like it overall. Also a big fan of the hot chocolate mug at the end!

Aid Stations
Gotta say, this was maybe my favorite part of the course. I run well on pure sugar and I took advantage of 3 of the 4 on-course sweet stops - gummi bears, m & ms, and a big ol' marshmallow propelled me to the finish! And boy, did you need it because...

The Course
Holy Hills that was a lot of uphill! Every time you think you are done, you are not done. Personally, I was in a good training space to tackle this course and crushed it, hills and all with a 17+ minute PR, but it's definitely not easy. Thankful it was only 15K and not a half marathon.

Overall, a fun themed race that stays true to their promise of chocolate for all!

Link to this review
Login or sign up to leave a comment.
Amanda Berg recommends this race
(2021)
"Great Local Vibes"

2021 was my first year running the Craft Classic Half and my first race back after all the races were cancelled in 2020. This is one of the smaller races I've done and I liked the smaller, local vibe.

Race Expo / Swag
Packet, t-shirt, and bib pick-up was at RoadRunner sports. I liked that we got bonus points for shopping at the store that night, since I usually shop there anyway and I needed new shoes! We also got a digital swag bag with coupon codes after the race.

Race Course/Experience
This has the potential to be a really sweltering race. We got lucky that there was cloud cover all morning! Much of the course is actually downhill, which was nice, until you get to the hill at mile 10-11. This was a bit cruel. Worse than other races? Maybe not, but definitely tough on me since I was not well-trained up at this distance. Then after I survived that hill, one last hill at the end really ensured this was my worst half marathon time ever.

But you know what? I was still smiling! Because I was in San Diego and I just finished another half marathon! So, even though the course has it's challenges, that's kind of the point, right? Don't let that keep you away.

Race support on the course was great for a race of this size - after the first stop that had porta-potties, it didn't seem like the later stops had any lines. After mile 9 there was water every mile. It's not a very scenic route and not a lot of people out cheering, but you definitely don't have to worry about finding what you need on course.

As the name implies - there is also free beer at the end! I am not one to partake in beer after running so far, but it's a good bonus, and I did pick up a free beer glass that I have been using regularly.

Overall, would recommend it and potentially run it again!

Link to this review
Login or sign up to leave a comment.
Amanda Berg recommends this race
(2021)
"Fun Distance for Hot Chocolate"

This was my first ever 15K race distance and my 4th virtual race since most of racing has gone totally virtual. I have to say the distance is really nice; not quite as hard on you as a half marathon, but still a distance that you need to train up a bit for. I was working my way back from injury and it was a good goal distance to work up to.

The all-important thing about a virtual race is the swag bag. Since you can't be at the race expo, the swag bag brings the expo to you. I'd always heard great things about the Hot Chocolate races, so I was really glad I didn't need to miss out on the hot chocolate itself - they sent packets of cocoa with your race bib and medal! This was definitely my favorite part, since I don't have luxurious hot chocolate that often. You also get a hoodie and we scored free hats with a special code!

Link to this review
Login or sign up to leave a comment.
Amanda Berg recommends this race
(2019)
"Beautiful Turkey Trot!"

This was my first ever turkey trot and Run Sedona does a really great job with a small-town race.

Pick-up: We were able to pick up our bibs and swag at the Sedona Running shop the day before the race (you could also pick up same-day). Instead of T-shirts, this race gave us these cool big mugs with the race logo on them! So, not really an expo, but Sedona Running had some really cool Run Sedona gear in their shop and offered 10% off for racers.

Race: This was a small race (maxes out at 500 runners) and run on open road. If you could stick with the pack, though, we owned the road for a bit. There was a water station half-way through and the SCENERY - I just love running through the red rocks! Really great views on this route. There are a few hills on this route and Sedona is at almost a mile of elevation, so it was a challenge for me as a low-lander. Still, I was only 30 seconds shy of my 5K PR!

Be prepared for any weather at Thanksgiving in Sedona - our day was cold and threatening rain, but it juuuust held off.

Oh, and there was pie at the end, so #winning!

Link to this review
Login or sign up to leave a comment.
Amanda Berg recommends this race
(2019)
"It's all Downhill... until it's not!" 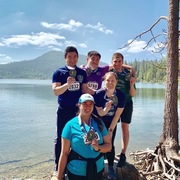 This was my first Vacation Race series race and I really enjoyed it! A group of 5 of us who are all friends from high school and college challenged each other to this race. For one of our friends it was her first half marathon!

Arrival: One of our friends lives in Fresno, so we flew into the airport there (which is the closest airport to Yosemite). Note: it is a TINY airport, but got the job done! We drove up with one car and our camping gear the day before the race and set up camp.

Expo: The expo was definitely a different vibe from your typical road race; it was set up right at camp. Just a quick line to pick up our bibs and then we stopped by the fire pit for free s'mores! S'mores easily makes it my favorite expo ever.

Racetime: If you're not an early riser, maybe look for another race because we were up at 3 a.m. to catch a bus up to the top of the mountain. It was SO. COLD. We drove up, up, up in the dark and then walked to the start line where they did have coffee and heaters waiting for us. Soon, though, we would know that it was all worth it.

The first 5 miles of the race is on a fire road, which is basically a wide trail in the forest. This part started out with some light hills, and eventually transitioned to a bit downhill. But this was the most magical and beautiful part of the race - the flowers in boom in the forest all over the trees made it feel like running through a fairytale. Once we hit the road, it was all blue skies and steep down-hill. Not easy on the quads, but you did kind of feel like you were flying.

Then the last three miles hit and we bottomed out on one side of the lake. Did you know tiny rolling hills could feel so difficult? I didn't! When you just spent almost 2 hours running downhill, even flat terrain is a slog. But the speed we picked up downhill got me a fairly good time; not my best, but far from my worst.

We ended right back at camp at Bass Lake and my 1 runner friend and I waited about an hour for our three friends to finish.

After-party: One of the big perks of Vacation Races is that you are already in a beautiful place. We had planned to meet up with some other friends and rented a boat on Bass Lake. If you go, I highly recommend this as an after-race activity!