I registered for the DC Wonder Woman Virtual Race, this past September and the swag package arrived immediately. Let's take a moment to appreciate the swag: Warm 3/4 zip up, wrist bands to hold goodies, shopping bag, and other goodies.
Typically October and November are difficult months for my mileage as work gets hectic, but this virtual race provided motivation to hit the pavement and trails.
Virtual races are often hit or miss, but this race offered nice swag, so it was totally worth it.

Link to this review
Login or sign up to leave a comment.
Barb Byrum recommends this race
(2019)
"Summer Run in the U.P."

From my understanding, this was the second year of the race. This year's race was well organized with plenty of water stations, which were well staffed, ample parking and plenty of restroom options, and a very scenic route. The after party was very impressive, especially for such a small, local race. Upper Hand beer, water, warm breakfast burritos and bananas were available to all participants. This was a great way to run into the summer running season.

Link to this review
Login or sign up to leave a comment.
Barb Byrum recommends this race
(2018)
"Lemon Lime Gatorade with a Thin Layer of Ice"

Race morning came early and it was cold!

The race started at the capitol and took runners through the city, passed businesses, along Lake Mendota and through a beautiful neighborhood before returning to the city. There were hills. In fact, my Garmin showed a total elevation of 274!

The aid stations were well staffed, but not flagged, so runners could not tell they were coming up, until they were there. PS the best way to drink Lemon-Lime Gatorade is with a thin layer of ice on top.

The day after the race, participants received an email with a link to free pictures that were taken along the course and at the finish.

For those that qualify for Boston, by running the Madison Marathon: You are my hero! To run a marathon is a huge accomplishment, but to run it with the last 13 miles being the half marathon that I ran: Amazing!

Link to this review
Login or sign up to leave a comment.
Barb Byrum recommends this race
(2018)
"Detroit International Half Marathon: Wake up early, run to Canada via the Ambassador Bridge and then back to the United States through the tunnel all in 13.1 miles."

The race was everything I expected it to be.

At approximately mile marker two, runners approach the Ambassador Bridge to cross into Canada. After five miles, runners enter the tunnel to return to the United States. After a run through Mexican Town and Corktown, runners cross the beautiful finish at Fort Street and Cass Avenue.

After completion, runners are given their medal a bottle of water and, my favorite, chocolate milk. After moving further away from the finish, participants receive a bag full of fuel (including a banana, cookies and a cup of fruit).

I cannot wait to sign up for this race, next year. The only thing that would make this race better is if a few friends would join me.

Link to this review
Login or sign up to leave a comment.
Barb Byrum recommends this race
(2018)
"Women's Half Marathon for the WIN" 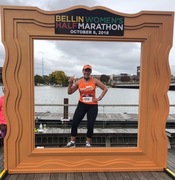 A few months back, I convinced a girlfriend to run the Bellin Women’s Half Marathon as her first half marathon.

Packet Pick Up was a breeze and trading for a larger hoodie was simple. There were opportunities to sample products, buy last minute running necessities (including shoes, socks and headbands) and an area to make encouraging signs. The packet pick-up bag was a one-of-a-kind design that also served as the gear check bag for those that needed dry and warmer clothes at the finish.

The pasta dinner was crazy empowering as the keynote speaker was Molly Barker, Founder of Girls on the Run. Other speakers included Chris Woleske, President and CEO of Bellin Health, and Linda Maxwell Race Director, who were so encouraging.

The race started in front of the Hyatt Regency Green Bay, less than a block from the KI Convention Center and immediately took runners up a bridge (not too bad of an incline) and across the Fox River. Runners then ran down Broadway, which seemed to be pretty industrial, but the reward came around mile seven, when we crossed the Fox River again and started running on the Fox River Trail. The race was well supported by groups such as Girls on the Run and there were a few different radio stations that provided much needed spirit at certain mile markers. I was pleasantly surprised by the number of spectators and supporters (most of which seemed to be husbands, boyfriends, sons, brothers and children).

Before crossing the finish line, I had the opportunity to run by the Race Director Linda Maxwell and thank her for putting on a great event and that was before I even experienced the finish party! Talk about a way to celebrate an accomplishment: Non-alcoholic champagne, chocolate milk, water, salad pitas, cookies, strawberry shortcake and chocolate all included for finishers! Wow! There was even a great set up for pictures, which was much nicer than the regular simple backdrop banner.

For use after the race, an injury hotline Bellin Women’s Half Marathon Injury Hotline.

Overall, I am so thankful that this was my friend’s first half marathon race as I believe she experienced everything that a half marathon should be and she rocked it.

The theme of this year’s Bellin Women’s Half was determined.