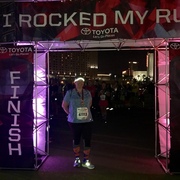 Overall the race experience was awesome, there is such energy with a race like this! Everyone who is there wants to be there and the running community is amazing! The t-shirt and medal were perfect for a high end 5k! The course was an out and back, and they shut down half the road for us. We ran behind casinos, so it was a bit boring, and it was pretty dark. They did have 2 or 3 trucks set up blaring music, fog and lights and that helped lighten things up. They also didn't have the water station set up until mile 2 and I think most of us thought that it's only 1/2 a mile further than most other races, but that 1/2 mile made a big difference! This is also a flat course, so I highly recommend extra stretches after the race unless you did a lot of training on flat roads.

This was the first event in Vegas after a mass tragedy, so I don't know if it will be the new "normal", but the monorail was overloaded, we had to wait 3 trains before we got on to a very crowded and way too "friendly" monorail ride. Once we got to the event, the additional security was nice; however, there wasn't enough, they were funneling a lot of runners and spectators through just a few stations.

Once inside, there was lots of room and we made our way to our corral; however, my parents and other spectators were left with nothing. The Goo Goo Dolls were performing later, and so I recognize that they didn't want chairs or bleachers in the concert area - but even all the way across the field there wasn't any where for the spectators to wait while we finished. My parents are in their 60's and were so excited to support me in Vegas, and I felt awful when I was told that as they were trying to get down to sit on the grass, someone laughed at them. I feel very fortunate that my parents still love to support me, in all that I do, and couldn't wait to be a part of this with me - only for them to struggle while I was running.

This was fun and a great experience and I would recommend it to others, along with the warnings of time management and be careful about bringing family or friends to support you.

Link to this review
Login or sign up to leave a comment.
Kate recommends this race
(2017)
"My First Half!" 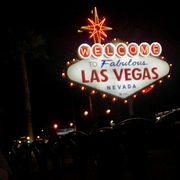 Overall this was a very fun experience! A friend mentioned doing it - and while I had never run more than 5 miles before, I found a training plan and got to work! I enjoyed training for it, building up my miles and getting prepared for my first half. I was excited that I'd be traveling to Vegas, and I signed up for the 5k and the Half, which gave me the Remix challenge medal as well.

The start line was easy to get to and find, even with All The Runners! Gear check was easy to figure out, there were plenty of port a potties (cause you are there for hours!), and lots to keep you busy while waiting to move to your corral.

Once we got to our corral, we found a place to sit and conserve our energy. Once the race started, eventually the corrals started moving forward - I am a middle of the pack runner, so it took a bit to get up to the start, but the energy kept increasing the closer we got, and it was fun! We took off and kept a really slow pace while the runners started to break up and spread out. At the first bathroom break, things got confusing. The stop was accessible to runners who were on their way to the turn around and to those who had already turned around and were heading back - so we had a line of people waiting, and the other side just kept cutting in. It would have been easier if there was a set for one side and a set for the other. This was also the first spot where I noticed people cheating and cutting the course.

We moved on, hit the turn around and ran down the Vegas Strip! It was so much fun! Unfortunately, it wasn't long after that I felt something go wrong in my right leg. After having had a great training cycle, mile 4 I had an injury. We dropped to a walk. Fortunately, runners are awesome, and my running partner made a goal to get me to the finish of my first half, and she stayed with me, even after my injury!

The water stations were great. You had only water, then water & Gatorade, and at the fuel station it was SIS fuel. The volunteers were wonderful, there was plenty of water and Gatorade to go around and they were keeping the road as trash free as possible when there are 40,000 runners tossing the cups as close to the trash can as possible.

The aid stations were great - unfortunately, due to my injury, I did stop at one - but it was so fast and efficient! As I was slowing down, they were already asking what I needed, so by the time I was in place and had my sock down, they were applying the ointment. Another runner stopped for a pain reliever, and they took down her bib number and got her on the way. I found them to be friendly, fast and taking each runner seriously.

There were a few times the course took us through what appeared to be a sketchy part of road; however, at no point did I feel unsafe - the course support with the officers, volunteers and even some spectators was wonderful, and we would no sooner look at each other and wonder about the road, then we'd turn a corner and see the bright lights and decide that a little dark stretch was worth it!

The time on Fremont was great, such energy there! Loved the lights on the Strip, and the bands were awesome! Not only did they play and stay upbeat, they yelled support to the runners, called out encouragement in between every song! I hadn't expected that and just loved it!

I had read that from the finish line to exiting the race area was almost 1/2 a mile, but it was awesome, it was spread out enough that we could get our water, Gatorade bottle, ice cold chocolate milk (yes!), pretzels, oat bar and pringles (yes, pringles!) and then make our way out. My running partner was genius and had a couple of bags in her belt for this - I wouldn't have been able to carry it all, but she whipped out a bag for me and we were able to put all the food in the bags and carry it easier as we ate and drank and made our way out.

Gear check pick up was awesome. It was so easy to get by bag, and then going to get my Remix medal was fast. There was a line, but it moved really fast.

I have to say, the staff and volunteers were awesome. It was my first half, and I picked an awesome one - but several times felt like a deer in the headlights and I tried to figure out my next step, but everyone that I encountered was super helpful!

This was fun and I'm glad I picked such a race for my first half, I made great memories! I recommend this if you are looking to have a good time. With a course cut off of 4 hours, even injured, I wasn't in any jeopardy of not finishing! 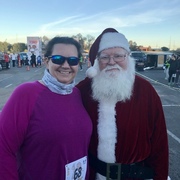 I love the events put on by Cox Running Club. Packet pick up was at the location so you got an idea of travel time in advance and it was well organized. Race day is always crowded, but they had it marked well and got the half marathon off on time, the 10k just a bit late and then the 5k. They had plenty of water, bananas and granola bars before the race, along with a Santa that I got pictures with. There was race day packet pick up & registration, and it was organized and not blocking any of the runners already lined up. The route is along the Trinity River and goes over a couple of pretty bridges and has lots of nice scenery. The course has just enough up and down to keep the muscles loose, but the volunteers are the best! The 5k had a water station at the half way mark and a great group that were encouraging, funny and on top of the water! There were lots of runners who finished and hung around to support those coming in behind them. The cheering at the finish line is one of my favorite things about this race! When done, there was still plenty of water, juice pouches, bananas, granola bars and bags of chips to go around!

This race comes with a long sleeve tech shirt and participation medal, and both were high quality! They had plenty of port-a-potties available, as well.

There is plenty of parking, and they send out information about parking in advance of the race, but the location is off a small 2 lane road, and between locals and runners parking on the street instead of in the lot, the street gets congested.