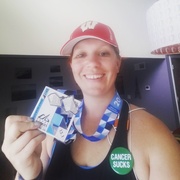 This was my first year running the Revel Rockies Half Marathon. Part of the reason I chose this one was because it was stated it was downhill. Oh, they did not lie!!

Besides a few uphills at the beginning (always a fun start), the rest was a downhill run. Most of it was gradual, but there were some pretty good hill going down.

The expo for pickup was small and besides getting my bib and other necessary items, it wasn't worth the stop. There were some cool "photo booths" to take some photos at.

The morning of the race you had to be shuttled by buses to the start line. Not a big deal but the lot was not organized very well. I was being dropped off and no one had an answer where to do that, so I was dropped off as close as possible to the buses. I ended up having to wait about an hour till race start once at the start line, which was okay, but got a little boring.

The course is BEAUTIFUL, STUNNING, AMAZING!!! This was by far the most beautiful course I have ever run! Aid stations were every couple miles which was helpful since I didn't want to run with a water bottle. The only down fall was the hill at the start and then one right before the finish. Otherwise, it was a great course! There were not a lot of places for people to come to cheer you on so you felt a little lonely at times, but that all changed at the finish line.

The finish line ended in Morrison Park. Normally a nice little park, but with thousands of people it became over crowded. I received my medal and some water and left swiftly. It was too many people crammed into too small of a space. The medal is awesome, huge, and heavy! I might have to give it it's own hook! It was a short walk back to the shuttles, which I didn't use but it was nice coach buses taking you back instead of the school buses they had in the AM.

Overall, it is a great race and very well organized! I would recommend to anyone who loves scenic runs and some good downhills!

Link to this review
Login or sign up to leave a comment.
Jamie recommends this race
(2017)
"Always my favorite race"

This was my 7th year doing the BolderBoulder and it is by far my favorite race! I look forward to it each year.

It runs through Boulder and gives some great views of the flatirons. You finish running into Folsom field which is a rush with everyone cheering for you helps you finish strong.

T-shirt: you have options between short sleeve t-shirt, tech shirt, long sleeve, or all three together! I usually get the t-shirt. It is comfortable. You also get a calendar (which I use in my office each year) and some other goodies.

Course: The folks in Boulder are awesome! People sit out on their front lawns and share bacon, Doritos, marshmallows, and even have slip n slides! Beyond fun! It is a fun course with a few hills and tops out about 5300 feet.

Swag: You get a lunch bag with lots of goodies and a beer (can't drink them :(). I love the lunch bag and have used all of mine for the many years I have run it. It does get very crowded and sweaty in the field house where you pick it up but it usually moves pretty quick. There is an expo as well that gets pretty crowded but you can get some nifty things.

The Memorial Day tribute after the race is the best part. You and about 70,000 of your closest friends in the stands at Folsom honoring those who served our country. It is just a cool thing to see.

It is a fun 10K if you run or walk and I look forward to it every year!

Link to this review
Login or sign up to leave a comment.
Jamie recommends this race
(2017)
"Pretty good-lots of hills! " 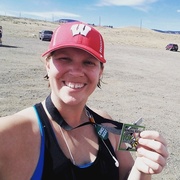 This was my first race with All-Out Multicourse Productions. They were well organized and had everything ready to go. The race director was a little over the top with instructions but getting past that, it was fine.

This course is very hilly. It starts on a downhill but it also finishes on that same hill but going up. There was a section of switchbacks going down that were easy to maneuver. It was a very unusually warm day in March and I was not expecting it nor were the race officials, but knowing this, a couple extra aide stations would have been helpful. The scenery was great as you went up and down the hills.

Post-race food was tacos which I couldn't eat (celiac disease) and orange/fruit. Not too much afterward. There was chocolate milk, which I always look for. Medal and shirt were okay. They use the same basic medal for each race which I understand with cost is good, but if you do multiple of these, it would be nice to switch it up a little bit.

I won't be doing this race again in the future, mainly because of the time of the year, but would recommend to anyone who wants some good scenery and a hilly course.

Link to this review
Login or sign up to leave a comment.
Jamie recommends this race
(2016)
"Always love the ColderBolder"

2016 was the second time I ran the ColderBolder. It runs through the UC-Boulder Campus which is not the most scenic but provides some great twists and turns throughout the course. Makes it interesting. It is in the beginning of December so you never know what the weather could be like. 2016 it was cold but not too chilly and 2015 was gorgeous and sunny.

It is not a large group who run this race but get some of the same craziness and silliness of the BolderBoulder. Perk of running the BolderBoulder is you get early access to run this race. Few aid stations on the course, but when it is so chilly, it is hard to stop for water. It ends in the field house with a chance to win some swag if you run.

Well organized much like BolderBoulder. Swag is a t-shirt and a winter hat which I wear all the time for running.

I had high hopes coming into this race but quickly shattered as the weekend happened.

Expo: It was at the western complex and very small. Not much in vendors and some of the volunteers were a little unfriendly. When asked if I could change corrals, I was quickly told no without explanation.
Swag: The sweatshirt is a great touch and I still use it today. If the rest of my experience wasn't so clouded, I would do the 5K just for the sweatshirt.
Race day/course: The 15K started after the 5K which didn't make much sense to me. It limited the time out on the course. It seems as if it should have been the other way around. The course was okay but I have done several races in the city and have seen the same scenery. The hill around mile 7 was a bit brutal towards the end.
Medal/Food: The medal is cool, not gonna lie. But they are the same each year so the motivation to come back for the same medal is not worth it. I like races who change up their medals from year to year. The Hot Chocolate cup was filled to the brim of food, most of which I shared with those who cheered me on. Thankfully I can use the cup for my pencil holder at work.

Overall: I would not do this race again. I was not impressed with the course nor the folks who worked the race. I will stick with RNR Denver for my October race.