The English Half Marathon was surprisingly good. I only entered this race last minute as I hadn't been quick enough to get a place in a more local half marathon on the build up to The Yorkshire Marathon.

The second half of the race however was brilliant! Lots of downhill, not too steep but enough to help you along as the legs began to tire! This race is an almost guaranteed negative split!

The finish line is as the famous Warrington Golden Gates and all the runners have to run down the 'red carpet' to the finish. On the day there is also a 10km race and family fun run which made for a great buzz and atmosphere and a great family day out.

The 'swag' included a technical T-Shirt and finishers medal as well as lots of goodies such as a High-5 nutrition pack- the only downside was that they didn't give you a carrier bag so you had to balance all of your goodies in your arms whilst wobbling down the finishing funnel! - A missed sponsorship opportunity there!

A great race with a great atmosphere. See you there next year?

Link to this review
Login or sign up to leave a comment.
Helen recommends this race
(2016)
"An ENJOYABLE? 20 mile race…?"

I actually really enjoyed the course, well as much as you can enjoy a 20 mile course! The gentle rolling bumps kept it interesting, my favourite parts were the long stretches of country road where the miles kept coming along and getting ticked off without too much thought. I least enjoyed the parts through the villages, up and down the curb, watching out for traffic and twisty bends.

The water stations were frequent and stocked with bottled water, some of the marshals also had jelly babies and orange segments on the second half of the course. My only criticism would be that another marshal on the last stretch just passed 19 miles before you turn to left to the big bump, would have been useful as if it wasn’t for the runners I could just about see in the distance, I wouldn't have known where to go, at 19 miles my brain does work very well!

The race was well organised and the marshals very supportive! East Hull Harriers also put on a ‘good spread’ after the race in the club house for all the hungry runners.

Link to this review
Login or sign up to leave a comment.
Helen recommends this race
(2016)
"20 miles up and down the MOUNTAINS of West Yorkshire "

This race is potentially one of the hardest local races! Gruelling hills for 20 miles on open roads. The race is very challenging but achievable; the course is quite loopy, running one of the worst hills twice! The race also takes in some nice views along the way if you can tear your thoughts away from the incline and take a look around.

This year was made slightly hard by the Sun deciding to make its first appearance of the year! I even managed to burn my shoulders running in my vest whilst the marshals stood round wrapped up in big coats and woolly hats!

The marshals did a great job again this year but this can be quite a lonely race with minimal local supporters. (Although one lovely old lady did stop to cheer me and offer a shortcut through her garden… needless I didn’t take it…!) There are long periods where you don’t come across anyone, not even another runner, as the field is so spread out.

So why is it, a race that everyone seems to complain about so popular?

The controversy last year may of certainly helped raise the awareness of this local race however aside from that it does have its plus points appealing to hundreds of runners each year:

Timing – It’s perfectly placed as for spring marathon training, 6 weeks before London this year and 4 weeks before Manchester.

Distance: There are not many 20 mile races around.

Hills: The hills are hard and horrible and… hard, did I mention that there are lots of horrible hill?! Strangely this almost adds to the appeal of Spen 20, it’s more interesting than a pancake flat run but it also presents a challenge.

Water stations are limited on this course, considering it’s 20 miles. There is one water station which you pass three times offering water in plastic cups. I would recommend carrying a water bottle especially on a warm day.

Link to this review
Login or sign up to leave a comment.
Helen recommends this race
(2016)
"Cold enough to freeze the balls off a brass monkey…"

This race has become a contender for the winner of my favourite half marathon! (Currently Wilmslow half is ranking number 1)

The race route isn’t very exciting, it’s an out and back with a loop on the end, because of the loop you don’t get to see runners, faster or slower than you running in the opposite direction. The route goes down country roads bordered on both sides by farms and stables and occasionally houses as you pass through the villages. It all looks very similar! The only real landmarks that stood out were the hills – if you can really call them that, 2 bumps, one that you run twice and one that you only run once on the last mile. The hills are only really noticeable because of how flat the rest of the course is! For every up there was an equal down so they didn’t really impact on the overall speed.

The brass Monkey has a reputation for being very icy however this year they organisers had hired a private grittier to prepare the course. The rest of the country may have been experiencing snow but we didn’t have any adverse conditions over foot.

The marshals did a great job and were very encouraging. Although a lot of people came out to support the race, there were long stretches where the only non-runners you would see were the marshals. Their shouts of encouragement were very welcome on these sections!

One of the things that helps make this race great and drag runners out on such a cold day – other than being so flat and well organised– are the facilities, because the race starts and finishes at the race course there is plenty of room for all the runners to wait inside in the warm at the before the start. There is also not a part-a-loo in sight! The toilets are nice, warm and clean and the most importantly queues are short and fast moving! After the race the awards presentations also take place at the Ebor stand, with hot drinks and sandwiches on sale to thaw out the frozen runners and supporters.

This was a really good race which I would recommend to anyone looking for a half PB. Perhaps not the ideal race however if you are running your first half as the course is very bleak and the majority of runners seemed to have their head down, focusing on getting a good time. There isn’t the same exchange between runners that you perhaps find at other races. However if a PB is what you are after then this is the race for you!

Link to this review
Login or sign up to leave a comment.
Helen recommends this race
(2015)
"Hills, wind and more hills and wind!" 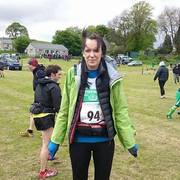 This was hard, perhaps not the best fell race for my first one however the fact it was so steep meant some walking was allowed!

The race started with a mile or so on the road – my favourite terrain! – Wearing fell shoes made it a little more difficult then usually though, I made up a lot of places at this point just to be over taken when the incline started!

The up was tough especially the last climb up to the summit, the strong winds had me clinging to the rocks as I scrambled up to the top. The hardest part was across the tops where the wind was at its worse, I felt that I was getting blown off course and at points blown off my feet!

The downhill was fun, but not knowing the route and not having anybody still insight in front of me meant I had to concentrate and be aware of the markers, rather than being able to open up as much as I’d like, luckily there were markers or I’d probably still be up there!

The marshals did a great job of directing me and keeping me on course (and shouting at me when I took my hat off because if was blowing off in the wind – Safety first!)

As soon as I recognised the route back down to Horton I started to open up and flew down the last part of the downhill before re-joining the road back round to the race field and finally the long awaited finish line!

This was a really tough race and I was probably a little out of my depth, there were points at which I would have turned back if I hadn’t decided it was probably safer and easier to keep going forward! I would recommend it but perhaps not to the more inexperienced fell runner! – But then again, I made it round so why not give it a go!

It just £4 to enter there are isn't any swag or memento, just the achievement of running 5 miles up and down a mountain :) There are also no aid stations - It's only 5.5 miles! But there are lots of marshals on the route to ensure runners safety