Expo- I wish the expo would have had the samples and more to do. The in city packet pickup was highly difficult and with no parking available, we had to pay $12 in order to park for 10 mins. It would have been so bad if there would have been more to do at packet pick up. The events were spread out, and not enough to make me want to stick around for each.
Race- the race warm up was a blast! The race itself was decently marked, beautiful views, but there were no gels available as stated. Bathrooms and water were well placed.
After party- love the champagne glass and chocolate, more chocolate would be great! The food was OUTSTANDING! Hardly any photographers for after pictures, but we did selfies with the cool backdrops.
I would probably do this race again, but my guest said she wouldn't. Photos were pricey and she doesn't like when races offer and don't come through with expos and course.
Most people I asked said their GPS said we ran 13.50+ miles instead of 13.1.

I run almost every fun Seattle Race and have to sadly admit the size was small, but it was cozy with all the women.

Link to this review
Login or sign up to leave a comment.
Carlia recommends this race
(2015)
"Best 5k I have ever done!" 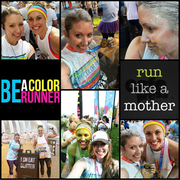 Expo- straight forward and easy. Fun swag and in an area where I could visit the armory for lunch or walk the Seattle Center before or after.
Race- my favorite course in downtown Seattle. Color stations are always loaded with color and have fun personalities. The course is slightly hilly, but not anything a newer runner couldn't manage. Perfect family race with characters like the runicorn to make the day magical! The Color is fun and this year they added gold and silver!!! The silver was my favorite color so far!
After party- the color run has the very best after party! Kid friendly with no alcohol, so you don't have to worry about drunk people or obscene words. The music, dancing, and color throw is a blast! Great vendors, samples, and photos! Only thing that could make this race better would be if they added a concert at the end. But not necessary for a good time. Fun staff and they sure clean up after well. I stuck around and ended up watching the tear down. This race is well put together and worth every dime.

Link to this review
Login or sign up to leave a comment.
Carlia recommends this race
(2015)
"I eat hills for chocolate! " 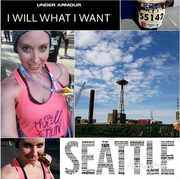 Such a hilly course! But the downtown runs are my favorite! I did the 5k last year and loved it so much I switched to the 15k! It was a blast and no race has race swag and snacks like HC15k!!!

Link to this review
Login or sign up to leave a comment.
Carlia recommends this race
(2014)
"I got my gobble on!"

Green Lake! One of my favorite run spots in Seattle. Packet pick up- we did a late pick up before the race start. It was well organized and very speedy. Fun and friendly people all around.
Race- The course is flat and just shy of a 5k, at 2.8 miles. We got to do little street running to help get the full distance. The race was well marked and all running levels friendly, there were plenty of children and strollers. I think people actually brought pets too, or they may have been locals on the course. A few places of congestion, but that is common on public trails with non race participants out and an about, as well as families with small ones in tow. The vibe was fun and people seemed to be enjoying themselves. For this race it is important for the faster and elite runners to be in front to avoid all the "social" runners. I noticed even with 3 kids running with me, we had to go around a lot of runners, interval runners, and walkers to stay paced. It was no big deal but with a course like Green Lake you need to dodge people, skaters, roller bladers, bikes, pets, and kids because this area is highly active.
After party-
I must say I got to sample, snack, and sip more here than any other race I have been too! It was teaming with vendors and almost all of which were engaging and had fun activities. My kids and I, got to race on bikes to blend full size smoothies, selfie for bars, and plenty of people to network with. I feel like it was the perfect pre thanksgiving party. We want to make this race a yearly family event. Maybe we will see you out there!

Link to this review
Login or sign up to leave a comment.
Carlia recommends this race
(2014)
" My First Half...inspiration at its finest"

Have you ever known a race was going to push you to, if not past your limits? This was that race for me. My first half marathon.
Back story~ To date, I had never run more than a 10k, even in training. I had purchased this race and my first 10k as a January 1st resolution. At my first 10k in April, I unknowingly sprained my ankle coming off a curb, funny thing is it was in the exact same location as this half. Little did I know this race would be moved to Everett from the previous Seattle location I paid for. So once I got the info about the change, I was a teeny bit nervous and relieved (Seattle is hilly) at the same time. My ankle was still not 100% healed and I was forbidden from training more than 3 miles at a time. I came to packet pickup feeling defeated and like maybe I should back out.
Packet pick up- short, sweet, and to the point. It was a Downtown Everett hotel with free parking. When you came in it was well marked, you got your bag and packet before going into the expo area. The expo area it self was small, but Biggest Loser cast was giving Q&A and motivational speeches while you walked around. There were smaller amounts of vendors, but they were engaging.
Race day- Early enough in the morning for a cool run. Parking attendants were on their game and who doesn't love free parking less than a block from the race start!?! There were lots of vendors set up and packet pickup for late entries in a room, fairly well organized. The race began on time and they had decent entertainment/ announcing before. The race started with a lite mile, then directly into a large long hill. Fortunately, there were minimal hills after this point. The race turned into a neighborhood area were we weaved down and around the streets for majority of the race. There were moments of downtown running then we doubled back through the housing and back down the big hill. We then ended up back down at the marina where there was some interesting parking lot running (not my favorite part), before the finish line. There were multiple bathrooms that were well placed. The race had one goo station and a few water areas. I found that I needed more water than they had set up, I was hoping for more goo also. Thankfully, I provided my own because I need caffeine free and there was no option. The finish line was really great and I could hear the crowd cheering as I came through. There were apples and bananas as you left the gate to the vendors, though the bananas were gone by this point. I was a little sad because many of the beginning runners were in my timeframe and most of us were hurting physically from the very few water locations and needed hydration and potassium to aid the twitching muscles. I was pleasantly surprised to find CHILI and pbj's as the after race food. It hit the spot.
After Party-
They had a race tent to see my stats and an area to get your finishing pictures with a photographer and honestly from this point I left to go soak my poor tired legs. So I cant be 100% sure of the fun that may or may have not happened after the race. There was quite a few fun looking vendors, I wish I would have felt good enough to visit.
Take away~If there was one thing I could take away from this race that maybe I won't see at another, it would be people of all sizes running together. Since The Biggest Loser is famous for it's obesity transformations, there were a lot of larger people out trying to take their life back and prove to themselves they can start and finish on the same course with even elite runners. It was amazing. I found motivation from running with them during the race, as well as cheering them on. I even had a lady who was considering quitting who I ran with for a while to help her pace, who I got to watch cross the finish shortly after me. This race was full of good hearted people who just wanted to accomplish and be a part of something great. I am happy that it was my first half and this memory will always be a part of my run story. Sadly, I ended up doing more damage to my ankle and it cost me a lot of pain but my experience was worth it. I think every race is more than just before, during, and afters and the best review I can give is to make the most out of every race that you can.