Eileen recommends this race
(2015)
"Great race for those looking to build up to half!"

Top 5 Things I Liked About This Race:
1) great nike t-shirt & goodie bag after the race (they give you a bag with food in it - similar to lulu bag)
2) beautiful scenery along lake shore path - great views of the city
3) easy pick-up of bib & t-shirt - stopped into Old Town location think it took a total of 4 minutes to get in and out
4) easy FREE parking at solider field - was afraid i'd have to figure out public transportation down to the race but i was able to easily park on site for free
5) finish on the 50 yard line of solider field!

Top 5 Things I Didn't Like About the Race:
1) had to weave in and out of runners all the time. had to run on the grass at points to get around people. since you're just running on the lakeshore path there isn't a ton of room
2) aid stations were spaced out well, but again since it was a small path - it was hard not to slow down when going through aid stations because of so much traffic
3) not a ton of people cheering on the course - there was hardly anyone cheering on the course - everyone was waiting in the stadium which didn't really bother me but felt like a quieter run then
4) running through McCormick tunnel - not the best part of the course but at least you get it over with early on
5) That's it - I could only come up with those 4 :)

Link to this review
Login or sign up to leave a comment.
Eileen recommends this race
(2015)
"Boston Strong"

I traveled to this race from out of state and didn't have any difficulty getting around the city. Everything you need is close by or easily accessible from public transit. The expo had plenty of volunteers and it was smooth sailing and easy access to get my bib and t-shirt. Then you enter the larger expo and it was packed. Felt like everyone wanted to buy their "Boston gear" so the official gear section was packed. Then you move to the general expo session - that was also packed. Had to weave in and out of people but there were plenty of giveaways. It seemed a little cramped compared to other expos I've been to. Not sure if it was because the aisles were smaller or there were just more people there.

Race day - easy access to athletes village via school buses. I didn't try, but I would say don't try to get there yourself. The buses pick up downtown and were very orderly and organized. Didn't have to wait long to get on the bus but the bus ride was about an hour. Two people on the bus had to find a makeshift bathroom because they couldn't wait any longer. When you get off the buses you have a while to wait before you actually start. Lots of people brought boxes or cheap yoga mats. It was raining so these were a great way to stay off the cold/wet ground. They had bagels, coffee, and bananas at the athletes village but didn't have any signs that I could see directing you to which station had which. I just had to crowd up to the front and look at what was in the boxes. They definitely didn't have enough people working to handle the crowds of runners at the athletes village. They had plenty of bathroom though and you didn't have to wait too long for a bathroom. Again, the other runners were so nice and offered their yoga mats to fellow runners to sit down. Definitely plan to be outside for a while (if it's cold bring clothes).

The walk to the start line is about 3/4 of a mile. Don't throw away your warm ups until you get down there. They had plenty of volunteers collecting clothes. They also had plenty of volunteers checking bibs and directing runners. When you get closer to the start line there are more bathrooms....so don't worry, you didn't miss your chance to go one last time.

They didn't do a great job of pumping you up before the start. It was quiet (no anthem & no music). But I guess Boston is enough to pump you up yourself :)

It was horrible weather (raining the whole race & low 40s) but there were still good crowds and people to cheer you on. It was great to run through the towns and colleges and kept the race interesting. There seemed to be enough security and traffic volunteers. There were plenty of aid stations as well; however it always seemed a little crowded on the road. Didn't ever thin out, but I guess that's what happens when you start with everyone who qualified around the same time as you (all a similar level of running abilities).

After the race, they had nice warming blankets which were definitely needed. It was also fairly easy to find family/friends afterwards at the runner reunite area.

Overall, it was a great race and happy to have had the chance to participate. Would love to go back!

Link to this review
Login or sign up to leave a comment.
Eileen recommends this race
(2014)
"Will run for Tiffanys!" 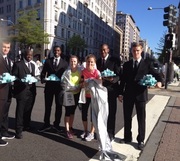 Grab a sister, friend, mother and do it!

The race was great and really inspiring to see so many women take to the streets.

The expo wasn't really an expo more just a pickup and go but there is so much going on in DC that it didn't bother me. The expo is right in downtown Georgetown so you really can't drive, but I picked up a public bike and there was no issue.

The race was great and beautiful scenery. Great views throughout of all the landmarks. There weren't a ton of people cheering but I didn't really notice I was too busy staring at the cherry blossoms and Washington Monument!

They warned of some hills, but there were really no hills.

BEST PART - Men in suits afterwards handing you a Tiffanys necklace on a silver tray. I will run for chocolate, I will run for pizza, and I will most definitely run for a little blue box!

I wouldn't recommend this race for men but it was definitely an enjoyable experience for a lady.