Scott recommends this race
(2016)
"A humbling experience... but a very well put-together race!" 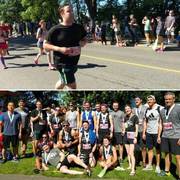 Let's start from the beginning. The expo was pretty nice, although not as vast and elaborate as the pristine affair that the BMO Vancouver Marathon puts on. (This likely explains the large price difference.) But that's not really a big deal to a guy like me. The couple of booths I stopped at were enjoyable. The shirt this year is great - who doesn't look great in red? Plus the material is pretty suitable for actually running in.

Getting to the start line was the main thing I found a little bit of an issue with at this race. Part of this is the fact that I live at the complete opposite end of the city, by the PNE grounds. Transit options were limited, and while I am an Evo Car Share member, the UBC grounds (where the race begins) are outside the "home zone," so that option also wouldn't have worked for getting to the start line. Luckily, I was able to carpool with some people. I should mention that it was also problematic getting home after the race, with quite a long walk to access transit routes, which is unfortunate after having just run a super long way.

The course was very scenic for the most part. The only kind of boring part was that loop out and back on Marine Drive near the very start. Other than that, you're surrounded by coastal views, little mini-forests, parks, beaches, bridges, etc. Pretty breathtaking... and that's not just the cardio talking!

A couple of decently hard hills (over by Jericho Beach and again later over the Burrard Bridge) made the course fairly challenging. Or perhaps it wasn't just the hills, but the heat and the fact that I started out a little too fast as well. (I crossed the 10K mark in a little over 54 minutes, but my total time was 2:02:37... oops! Positive Splitsville, population me.) Rookie mistake! My advice is definitely not to underestimate this course and conserve your energy, since the hills I mentioned happen after the halfway point. I missed my personal best by about 3.5 minutes, and I figured if the race were held the day before (when it was cooler and cloudier), I could have had a new record under my belt. But alas! We can't control the weather.

On-course support for this event was amazing. It seemed like people were cheering me on the whole way and I was never alone... kind of an incredible feeling. This was great and much appreciated, especially when I started struggling a little around the 12K mark... and then really struggling around the 18K mark. Ha! The volunteers at the aid stations and the course marshals definitely also added to this welcome sense of support. You all rock!

There were definitely enough aid stations, all of which had plenty of water, a few of which had sports drinks, and there was even one with Powerbar gels. That's probably my least favourite kind of gel, but they're better than a kick in the butt, that's for sure!

The medal is neat. Not sure why Science World is on it, since the course didn't really go by Science World, but it's pretty and shiny and nice.

The finish line food was OK, but could have been a little better and more diverse. Some nuts would have been tasty. Or hummus! This is my own bias, but any kind of (vegan) protein besides the little bit in the mini bagels, really, would be super helpful after a long race. (There were cookies, yogurt, and I think Powerbar protein bars for you, if you don't follow my specific diet.) That said, I did still stuff myself afterwards, so that's just a minor suggestion.

The bag check was extremely well run and I had no significant delays finding my stuff after the race. Top notch!

Overall, this was a great course, particularly considering the low registration prices (with some discounts I was able to apply, it was barely half of what it costs to run the BMO half). Great swag, scenic (if humbling) course, amazing volunteer / spectator support, solid expo, and everything seemed to run like a well-oiled machine. The only slightly problematic element was getting to and from the start/finish lines.

Since I ran the Modo Spring Run-Off 8K in March and I'm registered for the Eastside 10K again, I'm also looking forward to my "three-peat" medal in September!

Link to this review
Login or sign up to leave a comment.
Scott recommends this race
(2015)
"Shorter distance than last year, but still had myself a good time!"

This was my second consecutive year running in a BMO Vancouver Marathon event. I ran the half-marathon last year in the pouring rain, but the course was so lovely and scenic (and quick! especially that surge down Cambie Street to the bridge!) that I was grinning from ear to ear at the end regardless of being drenched.

I had intended to do the full marathon this year but my body had other ideas halfway into my training and I was sidelined with tendinitis near my right knee and right ankle issues and took a complete almost month-long break from running. So I had to drop down to a shorter distance, which can't help but feel a bit disappointing. (My finish time of 50:36 was also below my expectations... but not really all that bad either.) Still, I really appreciated that this event gives you the option of switching distances when life hands ya lemons.

Anyways, everything that was excellent about the half-marathon event was nearly as awesome with the 8 km event. This particular course mostly covers Stanley Park with an exciting finish in downtown Vancouver, so needless to say, it's an exhilarating beaut, scenery-wise! The T-shirt and medals were incredible--sleek and gorgeous. Dare I say the shirt is even better than last year's awesome shirt, if only because I look better in black/ grey than I do in bright yellow. The volunteers were all friendly and the aid stations seemed well-run. The expo is totally awesome, once again. So many booths, so many samples, so much to see and do, so many friendly running folk milling about all abuzz with anticipation, and it's all wrapped up in the beautiful Convention Centre! Seriously, these guys know how to put on an expo. Race management... nothing bad to say about it at all.

Only problem (and it really only relates to the 8 km option) was that the start line was super tough to get to! Starting in the heart of Stanley Park after the half and full marathons have begun (and their related road closures) make it a somewhat labyrinthine endeavour to get down there, even with the shuttle bus provided. I was, however, somewhat more OK with getting up 3 hours early to make sure I got down there since it didn't start till 9:30. (Those poor 7 am half-marathoners... oh yeah, that was me last year, haha.)

Really, in the face of so much awesomeness, that's only a minor complaint, and again only affects the 8 km distance, as the start line for the half and full marathon in Queen Elizabeth Park is pretty straightforward to get to.

To top it all off, it was a nice, clear, sunny day so you could really enjoy the vistas and the atmosphere... although almost too hot! No idea how the full marathoners didn't all evapourate into a cloud of sweat!

Link to this review
Login or sign up to leave a comment.
Scott recommends this race
(2015)
"Vancouver Sun Run 2015"

This was my first time doing the Sun Run, the largest 10 km road race in Canada. Needless to say, it was pretty packed, which was fun in some ways, and nuts in others. The energy of being surrounded by so many people each putting in a great effort was pretty infectious. Of course, given that there are so many people out there jostling for position, it can at times (not often, though--the wave start was quite helpful on this score) be an ordeal to get around people if you're in the mood to pick up the pace. (I didn't set a 10 k PR here but I didn't do too shabbily either.)

I generally avoided the after-party as it looked like a zoo inside the stadium. But I did sample some good stuff at the expo when I went to pick up my shirt and bib. The image on the shirt is lovely but the white colour makes it almost see-through (not the best colour choice)! Haha.

All in all: I'm glad I ran this race as it is a famous and uber-popular road race that's basically become legendary in the Canadian and even worldwide running community. I don't know that I'd be in a hurry to do it again but I would recommend trying it out at least once if you're a serious or even semi-serious runner and you've never done so before.

Link to this review
Login or sign up to leave a comment.
Scott recommends this race
(2015)
"Fantastic event!"

This was my first time running this relatively new 8 km race around the Seawall. It was pretty much an ideal running experience. Perfect size--just enough people to make it fun but not overwhelming. Beautiful shirt (I'm a sucker for the powder blue). Nice medal. And of course best of all is the legendary scenery, since the course is entirely contained within the world-famous Stanley Park and mostly follows the Seawall. You have the sea right at your side for almost the whole time. Magnificent atmosphere! Placement of aid stations could have been slightly more even (the last one was almost at the end) but that's really my only suggestion for improvement and it's a small one at that.

There wasn't really a big expo (as I understood the term) but there were a couple of booths at the start/ finish line beforehand that had some good stuff! Love those Nature's Path samples!

Highly recommended as a tune-up for a bigger spring race or as an event in and of itself. I might just have to try it again next year.