This race was fun but a little too crowded for us. The route was super narrow and we only had a small sliver of the road to run on, especially with the number of runners. We did opt to race with our daughter in the jogging stroller and did start in the WAY back but it was still pretty jammed. On the flip side, NODA Brewery put on a fantastic after party! The pre-race festivities and swag were awesome! Only downside was the narrow route. I would still recommend to anyone looking for a fun, evening run or to switch things up from their normal:)

Link to this review
Login or sign up to leave a comment.
Caitlin recommends this race
(2014)
"A Runner's Delight!"

The review title speaks for itself! What a great race! I ran the HC15K with two other girls and as we walked back to our car, we discussed how we really didn't have one complaint about this race.

Starting with the expo...

My cousin picked up a slew of packets on Friday, mine included- he said he was in & out in 15 minutes tops. He also mentioned there was lots of vendors and the packets were very well organized. He even mentioned that people were able to try on the race sweatshirt sizes in case they needed to exchange which I thought was a huge convenience.

The SWAG was awesome!!! Everyone received a hooded HC 2014 sweatshirt with a little runner icon on the back, which was super cute! The only downside is that all 5K participants didn't get the fancy finisher's medal..which is a slight bummer. Post race, everyone received a large mug full of chocolate fondue and goodies, along with hot chocolate. It was delicious!

Parking was excellent. There are so many places to park and garages down town Columbus. Parking was 5 dollars pretty much everywhere. I will say, the instructions and race management says all runners should arrive 1 1/2 BEFORE your assigned start time. I suggest maybe getting there MAX 45 mins early. We definitely didn't need all of that extra time...although you do never know how traffic is going to be on race morning. We ended up snuggling in my car for a good hour prior to heading to the start line:)

The 15K course itself was a really enjoyable route. Runners got a little taste of everything...Downtown, Arena District, Short North, OSU Campus...I really, really enjoyed it! The course even had some challenging elevation which was fun. The aid stations were spread out appropriately with both water and Gatorade. There was even a few bonus stations which included tootsie rolls, strawberry marshmallows, and chocolate kisses being passed out.

This race was super fun! The SWAG makes the entry feel WELL worth it! a true yummy delight in this runner's book!:)

Link to this review
Login or sign up to leave a comment.
Caitlin recommends this race
(2014)
"Gobble, Gobble // Trot, Trot!" 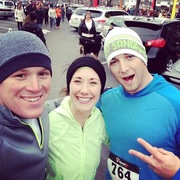 I just love a good turkey trot! I started running the annual Thanksgiving Day Columbus Turkey Trot last year when I realized it started right down the street from my aunt's house, where we gather for Thanksgiving every year. I couldn't pass it up. This year, I talked my two cousins into joining me for the 5-miler. We had a blast! It's a pretty decent size race. The start and finish is located at the Whole Foods in Upper Arlington/Columbus. You basically run down Lane Avenue through campus,around the OSU stadium, and make your way back up Lane to the finish. The first 1/2 of the race is completely downhill with little elevation which only means one thing...the last mile is a long, very long...drawn out hill to the finish line. Although there isn't much parking available around the Whole Foods shopping plaza, many people just filled up the side streets around the are and walked to the start. Since my aunt lives three blocks way, we were able to walk down and avoid having to deal with parking. There is one aid station at the 1/2 way mark on the course. It was filled with a decent amount of volunteers and there was even a nice little crowd cheering us on as we trotted down by the stadium, I was impressed. I have to say, the best part about this race is the first 1,000 men and women finishers each get a Whole Foods Pumpkin Pie! They are simply delicious..so of course, that is half the reason why I run this particular race- due to my sweet tooth:) There is no expo for this race, just your typical fun turkey trot! All packet pick-up took place at both the Whole Foods and our local Front Runner's store in U.A a good week prior to the race and ran through Wednesday evening. I thought that was very accommodating to participants.

With so many turkey trots around Columbus, there are too many options to count. I definitely enjoyed this trot and will continue my annual tradition in Upper Arlington...as long as the Pumpkin Pies remain at the finish line:)

Link to this review
Login or sign up to leave a comment.
Caitlin recommends this race
(2014)
"New Perspective"

Since Indy was about 3 weeks post marathon, I knew I wasn't going to be ready to race again so instead, I decided to run/pace my friend Miss Caroline! It was an amazing experience. Caroline is a walk/runner with determination like no other. This was actually my first walk/run experience and all I can say is I have a new found respect and perspective for ALL runners- fast/slow/mid-pack..everyone!

I wasn't able to check out the expo since I was traveling to Indy on Friday but I heard it was pretty decent! The overall organization was on point and I really liked having the option to stay warm in the convention center prior to the start in the weee hours of the morn. Parking was pretty easy as well. The finisher's medal and t-shirt were great! I thought the shirt was unique compared to some of my others. The course scenery was fabulous. That was actually my first Indy experience and what a great little city! Elevation was flat...a couple mini hills here and there but definitely a fast course overall. Aid stations were pretty decent..you could tell some started running out of water & Gatorade quickly in some cases.

My only complaint like many others is the time of year. It was freezing race day! Although I will consider actually racing the 1/2, if not the full in the future. I'll just toughen up when it comes to the cold:)

Congrats to Miss Caroline for an amazing PR! It was a memorable weekend!

Link to this review
Login or sign up to leave a comment.
Caitlin recommends this race
(2014)
"Chicago, you have my HEART!" 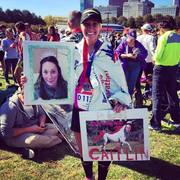 I'm going to keep this short and sweet because there is one thing you should know about this race......

Chicago was my first full 26.2 experience and I'm already counting down the days until I can enter the lottery for next year. The course is amazing- 26.2 miles of beautiful city and amazing spectators! The expo is phenomenal and you can easily spend your entire life savings there. The organization is top notch and everything just seemed SO, SO easy I really couldn't believe it. The finisher's medal is a beautiful piece of hardware I will keep on display for ever and ever and the dri-fit shirt is great! There are a ton of hotels to stay right along the course, although I do recommend booking a hotel room EARLY as rooms do sell out and prices sky-rocket marathon weekend.

My only recommendation is that if you're flying in from out of town, I recommend making it an extended weekend trip. I flew in Friday and stayed until Monday. Next year I will most likely fly in Thursday and stay until Monday so I have more time to explore the city and take my time at the expo. It was slightly overwhelming!

The course was fantastic. It's FLAT AND FAST! The only real elevation comes around mile 25.5. It's an overpass but once you get up and back down that bad boy, the finish line is RIGHT around the corner. I can't say enough amazing things about Chicago. A HUGE shout out to the amazing people that stand 6 rows deep in some spots and cheer on all of the runners. I had to choke back tears multiple times as I ran. I can't wait to return next year and go for my very first BQ!

Take my word for it..everyone deserves to experience this World Major.