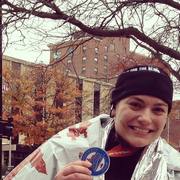 I can't believe I'm the first to review this race! Manchester, NH holds a special place in my heart because I grew up there. I now live in NC and made a special trip not only to run this race, but to see my family and friends.
The expo on Saturday was held at the Radisson Hotel. It was a pretty fun expo with lots of vendors and things for kids to do. I got my number (1950), my little backpack, a nice tech shirt, and other little things from BCBS. We sat in the middle of the expo to wait for Dave McGillivray to speak. I spoke with him briefly and thanked him again for doing the interview for my blog (Shameless plug: jenhaught.blogspot.com). I also got a picture and had him sign his book for me. His talk was great! He was engaging and had some interesting stories to share with the crowd. He was really motivating!
During the talk, Dave asked the crowd a few questions and discussed goals. My goal has always been to do a marathon and after last years disastrous attempt, I haven't thought about it much. So, Dave challenged me with a medal. He called me on stage and explained that he has given out about five hundred medals out to different people. The idea is that once you achieve your goal, you mail it back to him. So, I got the medal and I accepted the challenge.....stayed tuned for more details on that later, I guess? Haha!

Race morning was so cold, cloudy and so windy, the winds were 25-45 mph! My cousins and I were pleasantly surprised because parking was easy as pie. Our race packets included a map with all places you could park, so that was super helpful. There was a bag check, but I didn't use it. One of my cousin's did and she felt it was very organized and got her stuff fast.

The race started on Elm St and after the National Anthem, we were off! The first three miles were hell, hated every minute. River Road sucks! I actually had to text my husband quick and let him know that I didn't drop out and that was behind the cops and ambulance. I saw my parents drive by and that was a great boost! The ONLY good thing about River Road was that it distracted me from the 25-45mph winds. Once I got the hell off River Road and got on to Union St, I felt 100% better because I saw a bunch of my family.
I reached Livingston Park and that was about mile 6,they announced my name and where I was living, which was cool. The park was so peaceful to run thru and trail-like. I saw my family right before turning on to Reservoir Ave and luckily we did because I would've gone straight instead of turning left. They was no sign or it blew away or whatever, but either way, I went the right way.....up another crappy hill.

I was actually doing well and thought I would PR but then I hit mile 11.5 and got pissed. A giant freaking hill (Hanover St) ahead of me and I let it get the best of me. If I would've just stayed focused and moved along, I probably would've PR'd, but instead I had a temper tantrum and wasted a bunch of time complaining in my head and slowing down. I got up that stupid hill and the rest was cake. It was downhill and brought me right to the finish line. There were two sensor pads at the finish line and I stopped completely at the first one and everyone was yelling, "GO! GO! You aren't done yet!" I yelled, "SH*T!", kept running and finally finished!

There were only two improvements I could make to the race (besides taking out all the damn hills-haha):

1) Make sure the last runner has passed before you start packing up the aid stations. There were still a few behind me and the volunteers were packing up the water and I found that a bit discouraging.

2) There should be volunteers at every mile maker or major turn off. There were a few runners that went off course and it cost them the title (http://www.wmur.com/news/top-3-runners-go-offcourse-at-manchester-city-marathon/29512790). I'm assuming that signs blew away because the wind was no joke.

Other that that, I really loved the race. It was challenging, but it made you appreciate the downhill more. The crowd support was amazing and I saw numerous block parties along the way. after the race, there were free massages available and wonderful hot soups, chili, hot coca, water, pretzels, banana and more! It was impressive. The volunteers were fantastic, I don't know if I'd be out there in the freezing cold if I wasn't running, that's for sure!