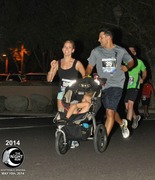 This was a super fun evening race!! They had a 5k and 10k and we did the 10k, with our jogging stroller. There were probably about 750 runners total so not huge but enough to make it exciting. Start and finish were at the Civic Center Lawn in old town Scottsdale and you parked at the library so a short 5 minute walk. Traffic did back up to park, so arrive early to experience the fun and not stress about parking ahead of time. There were a bunch of fun vendors and you could pick up your packet at the re race expo on the lawn. They had monster trucks and lots of other fun things for the kids. They handed out glow sticks and bracelets for everyone to wear too which made it fun! The race started around 7:00 at it got dark pretty quickly. The 5k and 10k course were the same, those running the 10k just did a second lap. This made for things ot be a little congested for the first mile or two but after that the crowd thinned out a little. The race was run om side walks, one barricaded street lane, or along the park paths, so in some areas you had to be aware of cars. There was also a fairly decent hill that the 10kers had to climb twice about half mile from the finish line. It was great weather, cooler temps because it was at night, and just really a fun race.

Oh and the coolest perk was that the race photos were supposed to be $1 downloads but because they were delayed by a few days, they ended up being FREE!! So cool right?!

Link to this review
Login or sign up to leave a comment.
Amy recommends this race
(2014)
"Nice Smaller Women's Race"

I admit, the Mermaid Series race initially drew me in because of the super cute race shirts (the only race shirt I was actually excited to wear afterwards) and the fact that they give out cute necklaces vs. medals to all finishers. In hindsight, I now wish they gave out a medal with a removable charm (much like the women's running series medals) but that's ok.

This is a small race so there was no pre race expo. You could pick up your number ahead of time if you wanted, but the day of was no problem. There were maybe about 150 women total running the half. There were more there running 5 and 10ks and they even had a race for younger girls called the mini mermaid dash. So the entire feel of the race was very positive girl power.

The race was along the canal at Rio Vista Park in Peoria. Parking was a little scarce, but we got there early so didn't have a problem. The canal was not closed to other pedestrians, so my main complaint was that there were still bikers, grandmas in strollers, etc that we had to navigate around on a sidewalk, while racing!! I thought that was a little crazy not to mention dangerous! The course itself was basic and a little boring. Out and back along the canal. There was not much crowd support but then again it was a smaller race.

All in all a good solid easy to get to race, the only (major) drawback is the fact that canal still stayed open to the public, which I felt was a hazard.

Link to this review
Login or sign up to leave a comment.
Amy recommends this race
(2014)
"Big Exciting Event, Little Boring Course"

The Rock N Roll Team always puts on a fun, super popular racing event and this years race was no different. You have to be prepared for the crowds and lots and lots of people. The race started on Mill and University, but we had to park and walk from over by Sun Devil Stadium, which was a good 25 minute walk. Combine that with about 30 minutes to get off the freeway and get to the parking area and then another 45 minutes spent in line waiting to use a port o potty, my best advice would be to GET THERE EARLY!!

There were a ton of corrals and the pacers were easy to spot. There were actually 2 different pacers for the 2 hour mark. The course started in Tempe on Mill, took us by ASU, down to Scottsdale and up through the Papago. The hill on McDowell was probably the worst, but once you made to through up that you got to turn around and come down and through a really pretty area by the Zoo, to the finish line at Tempe Beach Park.

The bling and expo were all top notch, as expected from a rock n roll race!! You come away with so much swag and prestige that it makes you want to do it all over again!

Link to this review
Login or sign up to leave a comment.
Amy recommends this race
(2013)
"Best AZ Race for Women, Especially First Timers" 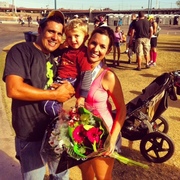 The Women's Series Scottsdale race was my first half and it did not disappoint! I had spectators with me, so we were able to park and walk about 3 minutes to the start line which was in Old Town Scottsdale. Alternatively, the race provided shuttles for those that wanted to park near the finish at Sun Devil Stadium. The start line was near the Civic Center Park and it was a nice open area to stretch and relax and there were plenty of port o potties, I think I only had to wait maybe 10 minutes max. The corrals were easy to get to and the pacer signs were very well marked. It was a nice medium sized race and drew a lot of crowd support which is very motivating!

The race was great because there were a lot of different terrains and scenery. We ran on streets, sidewalks, and running paths, and navigated though the streets of old town, Papago, behind the zoo, before finishing at Tempe Beach Park. The last two miles were probably the toughest as it is an out and back over the bridge in Tempe, and you run along side the people that are on their way to the finish line. There were adequate aid and water stations, but I think they could have used one more water stop towards the end of the race.

It was easy to navigate out of the finish area to find my party. The after race festivities were fun, they had a little primping area and free champagne! The medals were huge and had a cute removable charm that for $10 they would take off for you and put on a silver necklace. I thought that was a great touch.