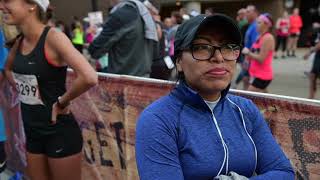 What did you think of the race? Share your thoughts! Write a Review
Josh recommends this race
2015
"A Kentucky Fall" 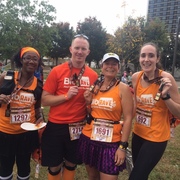 “Disclaimer: I received entry into The Urban Bourbon Half Marathon to review as part of being a BibRave Pro. Learn more about becoming a BibRave Pro (ambassador), and check out BibRave.com to review find and write race reviews!”

The weather varies greatly from year to year based on the unpredictable forecast of the Ohio Valley. This year’s weather was a near perfect 65 degrees and cloudy. It did rain a few times throughout the run, but they were usually spot showers and not heavy rain. The temperature made it nice not only during the race but also at the post-race celebration.

Registration: The registration was available online via the UBHM website through RaceSignUp.com. (The 2016 Registration is already open. Price increases on Halloween!). The price increased closer to race day and even offered in person registration at the Packet Pick-Up/Expo, but not race day. Along with the race experience, registration included a long sleeve tech shirt that was gender specific, timing chip in the bib, virtual event bag, post-race celebration, and runner tracking through the RaceJoy app. Due to the nature of the bourbon at the post-race event, only runners 21 and over are allowed to participate. Additionally, you must be present with a government issued photo ID at packet pick-up so they can verify your age and place a bracelet on your arm to identify you as an over 21 runner.

Expo: There were two expos this year, a VIP experience and a packet pick-up. The expo is a small event that allows for an almost intimate setting at Louisville Slugger Field (Directions). When you walk into the Expo, they posted all bib numbers in alphabetical order so you can see your number than proceed to a bank of people for bib pick-up. They were grouped together numerically which allowed almost no wait. Once you had your packet, you proceeded to the shirt table and a long sleeve shirt was handed to you with the preregistered size. A complimentary shirt exchange was around the corner if you had reservations about your shirt size. Also throughout the expo were maps of the course, information about the Urban Bourbon Walk (post-race experience), Urban Bourbon gear, information, massages, and Fleet Feet Sports Louisville. I cannot speak for the VIP Experience, but checkout my friends Erica and Jessica’s reviews that can.

Race Day: The race starts on Main Street in downtown Louisville, right in front of the University of Louisville Cardinal’s Men’s Basketball arena, the KFC Yum! Center. The starting area has sufficient facilities where a large number of portapots were setup under the 2nd Street Bridge and more inside the Official hotel of the Urban Bourbon Half, the Galt House. The starting line was a nice arch that had the race name and logo on it and some barricades along each side to make people get in line. There were no bands or corrals but pace groups helped identify where people should line up based on anticipated finish times.

The Race: At a near perfect start time for my less than early riser body, the 8:30 AM starting gun was awesome. The overall course has remained very similar since the 2012 LSC Half, but was modified between 2013 and 2014 (2014 and 2015 were the same). Once you run through the start timing mats, you head east towards the Cherokee Park area. This area is absolutely beautiful and encompasses rolling hills (a couple are challenging) and some amazing century old architecture. From miles 3.5 to about 8 you are in Cherokee Park, make sure to take in the fall foliage and sites. Miles 10-13.1 are back in downtown Louisville and you even get to run by the famed 6 story Louisville Slugger bat at mile 12.5.

This street race is carried out on all pavement (or concrete) for the entire 13.1 miles. To help you along the way, mile markers are present with synchronized race clocks. The lack of photographers left only finish line photos, which for me is always when I look my worst. After crossing the finish line, runners were given a medal and heat sheets before proceeding to the food and drink lines. (There was a medical tent at the finish line for anyone needing care). The food and drink selection wasn’t bad; water, PowerAde, bananas, and bagels were all present (I loved the cinnamon crunch bagel from Panera they had).

After exiting the racer area, you were in the public area where non-runners could pay $20 to gain entry into the Urban Bourbon Bash. This was a post-race party on the Belvedere that included massages, pizza, drinks, and a live band who was really working the crowd. This is where the orange wrist bracelet from packet pick-up was to be used. The bracelet gave you four bourbon samples, one beer, one slice of pizza, and one cup or burgoo.


Overall: I really love this race, the Sports Commission has done a great job at incorporating running in the Louisville area. Since bourbon is the centerpiece of Kentucky, the two have helped to market to our new Bourbon Trail, a huge tourism drive at touring the major distilleries. The unique medal is shaped like a bourbon bottle and hand dipped in wax. The pricing structure is very reasonable for a half marathon and you honestly get a lot out of it for a 3,000 runner event. I plan on running this race again in 2016 and hope to see you there.

Oh yea, each runner got a free finisher’s certificate that can be downloaded from the results website.

Suggestions:
Better signage at water/PowerAde stops to help differentiate the two products.
RaceJoy app was as much as .25 miles off on the mile marker (but cool regardless)
More photographers on the course and possibly even a finish line photo for free.

Check out my fellow BibRavePros reviews: