Write a Review
What did you think of the race? Share your thoughts! Write a Review
Vanessa Junkin recommends this race
2017
"One of my favorite races! " 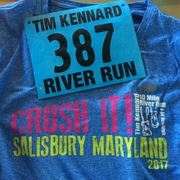 Disclaimer: I received a free entry to the Tim Kennard River Run through the Eastern Shore Running Club's sponsorship of the event.

The Tim Kennard River Run is one of my favorite races, and I come back to it every year (this was my seventh year running it, with just one year off when I watched a participant's daughter during the race). It's held in the city where I live, Salisbury, Maryland, and it's a great chance to see so many runners from our community out there.

I didn't rate the expo because there isn't too much of an expo — although Salisbury is technically a city, it isn't a large metro area. I'm the Eastern Shore Running Club secretary, and we had a table set up that I was at the whole time (11 a.m.-5 p.m.). Other vendors included TriCycle and Run, a table with Tim Kennard merchandise from previous years and what I believe was a vitamin vendor (they packed up early). The free Rob's Run for Kids was also held Saturday, March 4.

I participated in the 10-mile race, which, along with the 5K, was held on Sunday, March 5, starting and finishing at Salisbury University. The course goes into neighborhoods, down Riverside Drive into downtown Salisbury and back up Riverside to finish at the university. I do like this course, although running Big Sur has made it hard to rate other races when it comes to scenery. I gave the elevation difficulty a "1" because it really is a pretty flat course. However, for some reason, I seemed to feel all the hills this year. Somebody from a more hilly (or hilly at all) area probably wouldn't have really noticed the hills.

There were ample aid stations and I got water at each of them. The cups weren't filled too high, but I'm sure I could have asked for a second cup if necessary. There was also lots of music throughout the course, something I'm now going to add to my blog!

Parking is easy at this race. I actually went to Salisbury University and taught there for a year as well, and I'm very familiar with the campus, so I knew exactly where to go. I was able to get a parking spot in the lot closest to the start/finish line by the Guerrieri University Center. There's also a parking garage across Route 13 that is not far from the start/finish and Maggs Physical Activities Center.

I love this year's shirt, pictured in the photo. It says "Crush it!" on the front, and I have the feeling I'll be wearing it a lot. I had originally ordered a women's medium, but I decided to get a women's large because the medium looked a little small. I wavered between a 4 and 5 rating because there's no additional swag as some races offer, but it does benefit charities — so, the more swag they were to give out (unless it was donated), less money would be able to go to the charities. There are also unique awards for age group winners, but I didn't earn one this year.

I gave race management a 5-star rating. Disclaimer: I am friends with the race directors — but this race does deserve a 5. This was the 14th year of the race, and the course was very well-marked and easy to follow. The race was fun, safe and there was nothing I needed that was not available. I got emails leading up to the race and followed along on social media when not running.

After finishing the race, I went into Maggs Physical Activities Center (gym) and enjoyed some items from the wide array of food. There's also the opportunity to sit in the bleachers, which was appreciated after 10 miles.

I'll certainly be back next year! Visit www.TimKennard.org to learn more, and check out my blog post here: https://sherunsbytheseashore.com/2017/03/08/tim-kennard-river-run-a-fun-time-as-always/

We got to the parking lot about 3am. It was SOOOOOO cold!! I did not expect this for Florida - ...