Write a Review
What did you think of the race? Share your thoughts! Write a Review
Laura recommends this race
2016
"My dog's first race!" 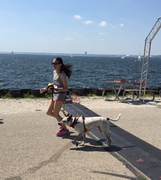 Overall: Arthur and I had a blast! This was his first 5K race experience and he was surprisingly well-behaved.

T-Shirts/SWAG: Everyone received a cinch bag with the Tails on the Trail logo and some discounts for local businesses (plus a $10 gift code for RoadID, as they provided bibs for the event). If you raised at least $50 through fundraising, you received a Tails on the Trail t-shirt. There were other prizes depending on how much money you raised.

Aid Stations: There were two aid stations and each one had the means for the dogs to also have water. There was a plastic kiddie pool with water set up around the 3/4 mile mark, which was nice for the dogs to cool off; Arthur jumped right in!

Course Scenery: The course goes through Veteran's Park and along the lakefront, which means we all got to benefit from the lake breeze on an otherwise toasty day!

Expo: There wasn't an expo for packet pick-up; you could pick up the Friday and Saturday before the race or the morning of. But there was quite an expansive choice of vendors at the race, including Ian's Pizza (my husband had a slice while he was waiting for us and said it was delicious!). It was great to see all the local businesses supporting WHS!

Elevation: The course is almost totally flat, as it is on the paved walking paths around the park.

Parking: Well, it's by the lakefront, so parking was of course a nightmare. We ended up parking on Lake Drive, which made it easy to leave after the race.

Race Management: I thought they did a great job, except that the race started almost a half hour late (the start time was supposed to be 10:00 am which I think is quite late, especially for summer) because they were waiting for Hank the Ballpark Pup to show up. I would suggest that they start earlier, as it got REALLY hot the last mile or so.

One thing I wish they did (although I'm not sure how feasible this is, since this is a fundraiser and this addition would probably take away from the money raised) would be medals, mostly because I wish Arthur had one for his first race. But I'm also an overzealous dog mom.