Write a Review
What did you think of the race? Share your thoughts! Write a Review
Ciara Doll recommends this race
2021
"HARD Night Race with Beautiful Views! " 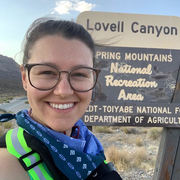 This was hands-down the hardest half marathon I've run to date. The terrain was hilly, the course was dark, and the heat was unrelenting -- but the views! Taking place in the Nevada desert in summer heat, this day/night race is one-of-a-kind and not for the faint for heart!

Pre-Run:
I had originally registered for a spring race with Calico Racing, but I was unable to attend, so I switched my registration to Running with the Devil -- and the race management team was so nice and quick to respond! This is a smaller race team, so there is no large expo or pre-race day packet pick-up. 5k/10k/half marathon runners could register to run at either 7:30am or 7:30pm for a night run, while the larger distances only had a morning start option. Knowing desert heat, and looking for a unique running experience, I signed up for the night run. Unlike the day runners, night runners were required to wear BOTH a front and back reflective vest as well as a wearable lamp (or carry a flashlight). If you're staying in Vegas, the drive out to Lovell Canyon is simple to follow. It was easy to spot the race set-up right along the road, and parking was RIGHT AT THE START LINE! I picked my bib and shirt up, and we were on our way at 7:30!

The Race:
This course ran up Lovell Canyon Road into the desert for 6.5 miles before turning around and coming back to the start. For the first 4 miles, it is a deceptively tough steady incline before getting some relief with a few downward curves. The best part of the course came at mile 5 with a fast downhill curve into a valley. But, that steep downhill turn comes back to bite you on mile 7, as it is a HARD uphill climb. The ultimate reward came around mile 8.5, with a steady gentle downhill return to the finish line. In terms of nightfall, there was enough sunlight at 7:30 that I didn't turn on my vest light until about 8:15 or so. The road, while sparsely populated, does not officially close during the race, so there were times when cars would pass by. Being out in the middle of the desert is no joke -- even with the moonlight and a bright LED light, it was DARK! The temperatures did cool off a bit, and this year we had a exceptionally excessive heat wave with temps around 115 during the day. The night race did cool off a bit, but if you're not a Nevada-native, this can be really challenging to deal with -- especially without any wind to provide relief. The heat and low vision can really mess with you mentally here! The race organizers did a nice job with first aid assistance and PLENTY of water stops -- those were a real game changer!

Post-Race:
This post race was really special to me because I placed 2nd for the women's division of the night half! I received a lunchbox cooler (very convenient for storing things in this heat!) as well as a nice medal. The team had plenty of water and snacks available too! It was a small group, but I was impressed with all of the food and drinks they came prepared with for the racers! I actually got a bit light-headed due to the conditions, so I really appreciated all the aid!

Tips: (there's a bunch for this one!)
- It is HOT -- bring a water pack with extra water and don't pass up any aid stations if you are running without a pack. The night temps are deceiving and it's still hot out there! Especially without wind. Wear a bandana around your neck and dump water on it at each station to keep your neck and face cool!
- Make sure your light has enough batteries or charge to last you for the duration of the race -- mine was getting a bit dim toward the end!
- This road is a bit bumpy -- watch out for uneven ground, especially during the night race!
- Night runners are required to be reflective from BOTH the front and back!
- Pace yourself accordingly in anticipating of that tough climb returning up out of the valley
- Make sure your phone is with you and charged -- I was surprised to find that I had no cellphone service issues, even when out in the middle of nowhere. If you're concerned that you may need medical attention and can't locate a first aid station near you, you can use your phone to call the organizers! (They also paced the course often, so you are never truly without assistance!)
- If this is your first night race, or first high heat race, take your time, practice beforehand if you can, and watch your fluids!!!! (It's so important, I've put it on the tip list twice!)

Final Thoughts:
There's something so magical about being alone out in nature under the stars! As a Midwest transplant into a bustling city, being back out in the wilderness was a joy! But this one is no joke -- you really will believe you're running with the devil in heat like this!

Running with the Devil

This was hands-down the hardest half marathon I've run to date. The terrain was hilly, the co...