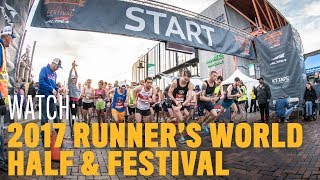 What did you think of the race? Share your thoughts! Write a Review
Dane D recommends this race
2018
"The Hills Are Alive!" 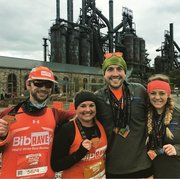 "Disclaimer: I received free entry to Runner's World Festival Half Marathon race as part of being a BibRave Pro. Learn more about becoming a BibRave Pro (ambassador), and check out BibRave.com to review find and write race reviews!"

We rolled into Bethlehem, PA Saturday afternoon and immediately hit the expo. Bib pickup was super easy. They had a stack of bibs and would simply program in the bib number they assigned you to your name. Boom! Super streamlined. Once I had my bib I headed upstairs to the shirt pickup and onto the expo. There was a nice assortment of typical clothing lines and some various sports nutrition. Aftershokz had a rather large booth which was nice to see!

Parking: Well, the venue was downtown and parking was limited. However! They were running shuttles to several local hotels. This was really amazing. I stayed about a mile away and chose to walk/jog down to the course and shakeout after.

The Course: This is the HIGHLIGHT of the race! Yes, the vibe of the weekend is awesome, yes this is an amazing "runner's race" but man o' man does this course keep on giving! Up and down, in and out of the city. It takes you from downtown to the suburbs and even through the beautiful Moravian College campus. All of the uphills and downhills keep it interesting for your legs! By working the different muscle groups when attacking the hills and blasting the downhills it kept you from really getting bored, both mentally and physically. Don't get me wrong, there's times when you mutter about a couple of those hills and their placement, but I really did appreciate them more than I used to. Some other details about the brass tacks of things - there were carefully placed hydration stations, port-o-potties just after the hydration stations, and aid stations in-between hydration stations. Overall, I felt the design and layout was pretty on point.

Food: There was a nice collection of bagels and granola bars. It would've been nice to have a more protein rich food source, maybe some nut butters or something to put on the bagels.

The Weather: COLD and WINDY! There were some significant winds out there. It started out around 36°F and man did those winds cut through. Luckily, it warmed up a little bit and there were areas of the course that were shielded from the winds. It wasn't quite as bad as the Philadelphia Marathon on 2016!

Overall: Would I run this again? I think the answer is obvious! Heck yeah! Aside from being star struck from Bart Yasso and Golden Harper, not to mention my fellow Bibrave Pros!, this is everything you could want in a race weekend.

If you're even a little bit curious about running, you should check this out. I guarantee you'll be inspired to take your first steps!