Write a Review
What did you think of the race? Share your thoughts! Write a Review
Chris Sosinski recommends this race
2019
"A unique fall run with a great running atmosphere" 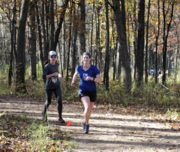 Run of the Dead Elimination Run was an energizing experience. There were three distance options to run in loop fashion, 34 mile, 17 miles, and 8.5 miles. Each loop began at the top of the hour starting at 8:00 AM and went until 3 pm. Personally I did the 8.5 miles, or 2 loop challenge.

The event had a packet pick up on Saturday but since I live in Milwaukee, I chose to pick up my packet on Sunday. I am sure the packet pick up was kick butt just like the rest of the day was for the Run of the Dead Elimination Run. Packet pickup was very easy on event day. It was literally under the main pavilion by the starting line.

Upon arriving to the park participants are able to follow signs for the Run of the Dead Elimination Run event. It directs runners to the main parking lot and secondary lot. Both of which are pretty full by the time the 2 loop challenge begins. Do not fret because there are plenty of spaces available at Old School Forest Preserve.

While waiting for the start of the 8.5 distance there were snacks and drinks for runners, including fresh and warm crepes. Competitors that were in the 4 and 8 loop challenge set up camp, making it look like a cross country meet. Music was blaring and the atmosphere was totally runner filled. Since it is the Run of the Dead, there was a ton of people dressed in costume too.

Upon the start of the loop, the RD did a countdown to finish the previous loop. Then he would actually say GO. No gun, air horn or noise maker of any sort. Then everyone took off. This year the course was super muddy. The grass had been trampled for 6 previous laps and the landscape demonstrated it. This mud hole was for about the first 400 meters, which included going up and down some gentle hills. Runners then were directed to a gravel path, for the majority of the loop.

While running, the landscape was just breath taking. Trails twist and turned through the fall wooded landscape and the terrain was flat. There was standing water in numerous spots, otherwise the trail was well groomed and marked. As for getting lost, do not even worry. There were signs everywhere. On the loop there is one aid station you see twice. It has food and drink along with some fantastic volunteers.

Upon finishing the loop competitors are challenged by a hill. They can go up it once or as many times as they would like with the time left in the hour. The best part is that atop the hill there are margaritas and jalapeño lager. Hill toppers also get a patch. Note that this hill is not for the faint of heart. The steep incline turns into a vertical grade. To put it in perspective there is a guide rail along the path you run. Some runners were not bothered by the grade of the hill. Run of the Dead has another challenge the King and Queen of the Hill. This year’s champion did 136 hill repeats in addition to his 34 miles. I only did one hill since it was so steep and was not great for a hill work out. Since runners can do as many hills as you would like, that is why I rated the course as a 3 star hill course.

After finishing the hill(s) it shoots participants back to the finish line. There runners are greeted by the RD and his crew. With the remaining time, participants are able to change clothes recover or plot for their next loop.

This cycle repeats until the final victory lap where each distance competes for the final fastest lap. This means each male and female from the 8, 4 and 2 loop challenge can win a prize for their fastest last lap. There are no chips, so upon crossing the finish line the RD asks runners what event they did and determines their place from their answer. Volunteers mark bibs as a finisher, so participants can get their unique custom mug.

After the race has concluded there is an after party at Half Day Brewery in Lincolnshire, Illinois. Tickets are required to attend and cost $10, getting visitors unlimited pizza and wings. Prizes are awarded, raffles for gift cards and fat bikes happen too. This year, the event sold past year’s swag. Just like the event, the swag was pretty wicked including sugar skull drinking vessels, Patagonia shorts, fanny packs, screen shirts and this year’s custom Goodr sunglasses for those who did not get a pair.

Overall this event is fantastic and I would suggest everyone to try out this event. There is nothing like it out there. The people are great and so are the trails. Thanks Libertyville Running Club for making this event possible.