Write a Review
What did you think of the race? Share your thoughts! Write a Review
Heather recommends this race
2016
"Changes made to month/day, but still great event!" 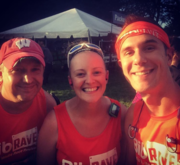 Rock the Night 5k used to be held on a Thursday evening in July. This year it moved to a Friday night in August. It was held with a 7pm start on Friday, August 26. Weather was fairly mild - in the 70s with some humidity, but definitely not too miserable.

PROS:
+ Packet pickup at Fleet Feet Old Town on Thursday from 10am–8pm. Mailing option for $15. OR big bonus in my opinion: race day pickup on site from 3–6pm. I did race day and it was easy peasy.
+ Race goody bag included: a black tech shirt (gender specific) with a small reflective logo on the front and some mesh-like panels on the side. I do sort of wish the back had a reflective logo too, or something a bit more 'flashy', but it's classic. I do appreciate that the logo is reflective. Also received a drawstring RAM Racing backpack and a frisbee.
+ There were 2 corrals (my bib was C, but they released B & C together). So about 3 minutes between A and B being released, which helps with keeping congestion low.
+ Aid station about 1.5 miles - included Nuun first then water.
+ USATF-certified course / chip timing device on your bib
+ Runner tracking available.
+ Free race photos (available about a week after the race).
+ Timing clocks at each mile marker.
+ Results posted within 24 hours after the race.
+ Great post-race party with Amylu sausage and Bell's Brewery (two beer options available) - you gave a tag off your bib to get your food/beer.
+ Live music (this year was Maggie Speaks).
+ Gear check until 9pm.
+ Bottled water at the finish line.

CONS / OTHER:
- The race course took you under the dreaded McCormick Place tunnel. I personally don't hate it too much, I felt like running through at night when the sun was setting made it seem brighter in the tunnel, so despite some uneven surfaces, it was easy to run through for me because I could see better than during those bright sunny days. Also, it's the only way to run so that it isn't a complete out and back on the path, which would be way too congested that way. So I get it, but something to keep in mind.
- In previous years there were cheeseburgers and ears of corn post-race. This year there were sausages, which some people loved. I'm not a big sausage person, and love cheeseburgers, so for me it was disappointing. This is just a personal preference.

Parking was available at Waldron Deck for $20. Easy to access via public transit. Plenty of emails from the race about the course, any updates, etc.

I had a great time running with my mom and hanging out with fellow BibRave Pros Eric and Frank - who both run much faster than me - but we had lots of time to chat before and after the race. I love running at night, so this race is definitely up my alley. Plus, food and craft beer equals two thumbs up. RAM Racing organizes fun races with awesome swag and I'd say look into it for 2017 :)