Write a Review
What did you think of the race? Share your thoughts! Write a Review
Kellie recommends this race
2015
"NYRR Queens 10K" 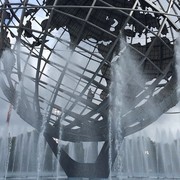 I may be a little biased since I live about 10 minutes from this race, but this a is great race to participate in. The entry fee is relatively inexpensive (for a NYRR race). The course is flat, with only an occasional overpass, and is essentially one loop around Flushing Meadow Park. You run past a lake, the Queens Museum, the World's Fair Unisphere (which was extra awesome because the fountains were up and running!).

Getting to the race is relatively simple. You take the 7 train to Mets-Willets Point stop and it's an easy walk to the start (actually the distance is pretty good to help you warm up). Plus, along the walk you walk by REAL BATHROOMS! Any race that provides an opportunity to not use a port-a-potty gets bonus points in my book.

NYRR as always has a corral system in place which helps keep the start somewhat organized. The Queens 10K is one of their smaller races so its not as overwhelming runner-wise as some of their other events.

The time of year of this race however works both as an advantage and disadvantage. Unfortunately being held in late June (used to be in July) makes for very hot and humid running. I mean temperature wise, this race was death. The humidity was about 1000%. I was sweating before the race even started. This year, to make matters worse, because of a potential rain threat, they pushed the start back an hour so we had a little extra heat and humidity. I ran this race in 2013 when it was in July and the heat was no better. Although then they had plenty of sprinklers along the course. This year they had sprinklers at about the halfway point and again just after the finish. They had plenty of water stops however and the fluid stations were all fully stocked! I know, I'm a back of the packer, so if there was still plenty of water by the time I got to it, you'll be fine!

However, because it's in June, Flushing Meadow Park is in full bloom and makes for very pretty scenery (I've run this location in March and it was not nearly as nice to look at). Trust me, if the humidity doesn't kill you, you'll like where you're running. Plus they had some local musicians along the course. Not big bands or anything, but they had a variety of styles.

All in all, the only downside to this race is the weather which is out of the race's control. Otherwise, the price is right, the location is great, the support of volunteers is amazing and they definitely stepped up their race gear (hello tank top race shirts!). I would recommend this race to anyone looking to do a 10K.