Write a Review
What did you think of the race? Share your thoughts! Write a Review
Jessica recommends this race
2015
"A Hidden Middle-Distance Gem of a Race" 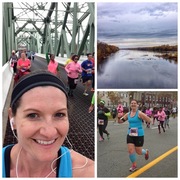