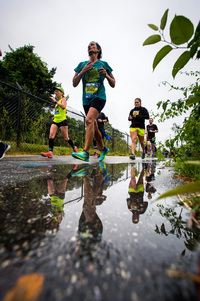 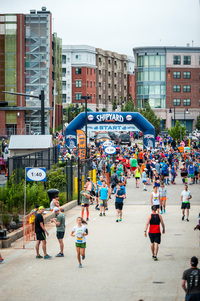 Write a Review
What did you think of the race? Share your thoughts! Write a Review
Tom recommends this race
2016
"Nice Run Along the Maine Coast"

I needed a race like this. It was chilly. It was overcast. It was rainy. My shoes and clothes were completely soaked by the time I crossed the finish line. And I loved every minute of it.

If running a half marathon in chilly and rainy conditions sounds like a miserable experience, let's compare that to some of my other races over the last several months:

<ul>
<li>Honolulu Marathon: 100 degrees, infrequent water stops and I saw dozens of runners passing out and being whisked away by medical personnel during the second half of the course.
<li>Garmin Half Marathon: Unseasonably warm, humid temperatures and full sun. This wasn't terrible (I think the high was in the upper 70's) but the conditions were enough to make for an uncomfortable race. Especially for someone who ran it dressed like Dorothy from The Wizard of Oz.
<li>Buffalo Marathon: springtime highs in Buffalo, NY average in the 60's. On race day, the temperature got up to 96.
<li>Grandma's Marathon: sometimes Duluth still has snow on the ground in June. This year the heat index on race day was 105. The race was black flagged and over 2000 runners didn't finish.
By the second half of Grandma's, I began wondering to myself if I would ever have a chance to run another race that didn't turn into a scorching hot death march.
</ul>
And to be fair, race directors never have any control over the weather. The best they can do is hope for the best and do what they can to mitigate weather related risks on race day. Despite the mild temperatures on race day, the Shipyard Old Port Half Marathon race directors had to do this as well. They moved their post race party indoors to avoid the rain. As far as the race itself went though, running on a slightly rainy, overcast day felt positively refreshing.

The Shipyard Old Port Half Marathon has two course options: a half marathon and a 5K. It's located in Portland, Maine, which Maine's largest city (and whose metropolitan area makes up almost 1/3 of the entire population of the state. Portland is just over 100 miles north of Boston and is known for its scenic coastline and islands. It's also the home to Shipyard Brewing company, which sponsors the race.

Perhaps the most notable thing about the Old Port Half Marathon is that its organizers rely heavily on runner feedback to plan their event. Everything from the music played at the start and finish lines to the post race festivities to the free race photos are all based on survey results and website selections.

The most notable runner request is that race T-Shirts aren't included in registration fees. You can opt to pay extra for a shirt when you sign up for the race, or you can buy one at the expo but you won't automatically get one if you don't request it. This is genius. I do so many races that even though I donate a couple dozen t-shirts to charity every year, I still have more than I know what to do with. So I skipped the t-shirt and bought a poster at the race expo instead. Since I didn't have to pay for a t-shirt, this race had one of the least expensive half marathon registration fees I've ever paid.

Another cool thing the race directors offered is the RaceJoy mobile app. This app is available for Android and iOS devices and also works with multiple races. I'm guessing the creators just charge a fee to race directors to have their races listed in it... It's probably the most useful race tracking app I've seen so far. It offers live tracking, course information, updates from race directors and integrated messaging. I kept it on my phone after the race because I found out that a few other races that I'm planning on doing this year are also using it.

The course itself was beautiful. It's a looped course that starts alongside the water at Portland's Ocean Gateway Terminal. The course brings runners along the waterfront, through parts of downtown Portland, past Shipyard Brewery, alongside Casco Bay and past lobster boats, sailboats, islands, parks and trails.

The course is mostly flat, but it contains two steep inclines. The first one starts at mile 2, where the course not only heads uphill, but changes direction several times by rounding a series of corners that almost feel like steep switchbacks on a hiking trail. The second is at mile 6, where the incline is about the same but the course is straight so it's easier to see the top. These are the two most challenging parts of the course. The rest is either downhill or flat other than a really short incline around mile 10.

There are plenty of water stations alongside the course and the crowd support is pretty good as well. There are a lot of spectators in the downtown sections of the course and after about mile 11, the crowds get thicker and thicker as runners approach the finish line. The final half mile of the course goes past the Portland Train Museum where spectators pack into old commuter trains to cheer on the runners. The race finishes back at Ocean Gateway Terminal.

The medal is decent sized, round, and has a nice design of a sailboat on it. Since the race is sponsored by a brewing company, the medal also doubles as a bottle opener.

The Post Race Party was a fun filled pizza, beer and music fest. The only downside to this year's race was that the weather forecast originally called for storms so the race directors moved it inside where things a little bit cramped at times. It did rain off and on throughout the morning, but it wasn't as bad as the forecasts said it would be and the party probably could have stayed outside. It's better to be safe than sorry with stuff like that though and it was still a lot of fun either way.

So overall, this was a fun race with a scenic course and great temperatures in a really nice city. It's been a while since I could say that I genuinely enjoyed a race as much as I enjoyed this one. When I crossed the finish line, I felt like I could have easily run a few more miles.

This website uses cookies and pixels so we know how people are using the site and to ensure you get the best experience here and elsewhere on the internet. That cool?
View our Privacy Policy
Yes