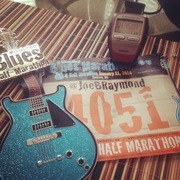 This year the Blues decided to not give a a tech shirt that will more than likely be seldom worn by participants but instead have a fleece, quarter zip hoodie with the race logo embroidered on the chest. Very nice addition! Of course the swag bag still included a MS Blues CD & a harmonica etched with the race logo & date.

Due to construction in the capital city the race course was altered from the 6 previous races. The change was for the better! This new course was great! The race started with a 3.5 mile loop around & through the campus of Jackson State University and looped back towards the start line. In an effort to keep the run lighthearted & energetic for Pittman I decided I was going to wave & say good morning to every group of spectators along the route.

At mile 4 I spotted Stephen on the sidewalk who was waiting patiently with a beer for me, he’s a good man. We ran along State St. up and down the rolling hills and in front of the University of Mississippi Medical Center & Veteran Memorial Stadium (home of the 1993 DCI World Championships) all beer in hand and interacting with as many people as I could. The half marathon split from the full just before mile 7 and as we made the right turn to start our return journey a woman runs up and says “I wish we had pacers for the half.” So of course I ask what she wanted to run. Her response? 1:45. “Hello, my names is Joe. I’m your pacer.”

So Kami (with a K) joined Pittman and myself. She is a pharmaceutical sales rep who won the female Masters division in last year’s Blues Half, but due to a busy work schedule this year was just looking to run and have a good experience. As we tackled the next handful of miles I realized two things. 1) Pittman was starting to fade and was about 30 seconds back 2) there was a group of about 5 runners who had evolved into a pace group all following Waldo.

The hills coming out of Belhaven and back into the downtown area were between miles 11 & 12. These are always the toughest hills along the course, regardless of what miles they come at. This was when Kami started to fall behind, along with almost everyone else that was running with us. I kept my prescribed pace through the final mile & half and crossed the finish line at 1:45:05, turns out I’m a pretty decent pacer. Look at how great this medal is!

Pittman’s wife, Amanda, works in sports medicine and was working the finish line medical area and was handing out medals knowing that we should be coming in to the finish soon. She gave me my medal which I quickly handed off to Stephen & I took off back into the course. I passed by Kami and cheered her on as I was hunting for Pittman. I found him just before Mile Marker 13. I ran with him shouting encouragements & pushing around the final turn. He was moving quick along the final turn and I couldn’t keep up as he sprinted to a 1:47:50 finish, shy of his goal but still 7 minutes quicker than his previous Personal Record!

The post race party always features great food, beer, and music. This is always a race highlight for me at the Blues. I was stopped by several people (strangers) and asked to take pictures. I put my Twitter/Instagram handle on my bib and asked them to please tweet them to me. It was a great social experiment seeing how excited people were that they found Waldo. (including the race announcer as I crossed the finish line)