Write a Review
What did you think of the race? Share your thoughts! Write a Review
Erin recommends this race
2016
"A fun local race! " 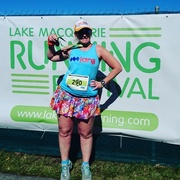 I was always intrigued by the Lake Macquarie Running Festival but hadn't ever had the chance to run in it since I've normally been in the US for a race. So this year was my year to run it!

Registration: I registered online, but I believe that registrations were also being taken on the day. I can't remember the exact amount but it was under $100 to register for the race. There was the chance to pick-up your packet the weekend and the day before at the local running shop.

Swag: You got an event shirt with your entry. This year it was a fluro green colour.

Course: The course was an out and back 10.5km course so it was two loops, but with the race starting just before the finish line, you essentially passed that finish 4 times before you are finally done! The course itself is absolutely picturesque, incredibly flat and on closed roads around Lake Macquarie. There are a couple of points in the race where you are on grass crossing a park (same park just out & back x 2) and the turnaround point is in an industrial area. All aid stations are well manned with plenty of water. They had to reopen the road at a certain time, so detoured people to the path along the lake - which was much prettier than the road - but no different in distance! I was the first one to be detoured (I was actually asked which way I wanted to go) and the volunteers provided a bottle of water since there was no aid stations on that part of the course. I ended up making up time and places down on the path, and popped out with 1km to go, where I joined the course to the finish!

The locals do come out and cheer for all the runners, which is great to see too!

Amenities: Since the start/finish was in the same location and located in a park the bathrooms real ones, which made for a bit of a line at the beginning. There were a couple of food vendors but plenty of cafes in the area. The local running shop also had a big set-up out the front of their store.

This is a great local race and extremely flat which makes for a fast course, but if you're not a fan of loops (or seeing the finish line 4 times) this may not be for you. Would I run it again? Yes! I love supporting local races and it is a nice and professional event.