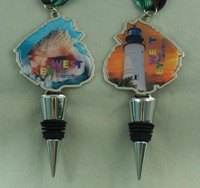 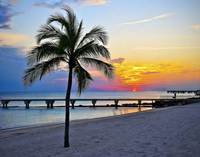 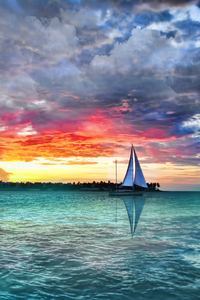 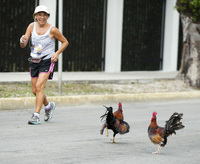 Write a Review
What did you think of the race? Share your thoughts! Write a Review
Donna Cantrell recommends this race
2020
"Racing in Paradise"

Done. Miles of training through heat, humidity, then rain, and finally snow. All with visions of the “Margaritaville” ahead. Spending January in southern Florida was attractive enough, but 13.1 miles in Key West a vision. The Key West Half Marathon did not disappoint.

I can now wholeheartedly agree that this race should be on every runner’s bucket list. It well-deserves the honor of “the best winter half marathon in the USA” by the author of The Best Half Marathons in the World. Though the weather in this tropical island can be temperate, it can also be HOT. And humid. As it was on our race day. Watch the weather reports well and hydrate appropriately. Otherwise, relax, take plenty of photos, and run.

PRE-RACE
The Key West Half Marathon Expo/Packet Pickup ruined all future expos for me. Forever. Situated inside the Turtle Kraals bar and restaurant, it overlooked the Gulf of Mexico. Imagine… Your race bib in one hand and a pina colada in the other. No crowds, no pushing or shoving. Just plenty of good vibrations. Yup, I’m ruined.

It took all of one minute to checkin and receive my bib and race shirt. Another thirty seconds to retrieve that of my BibRave teammate. I went another ten feet and received our gear bags. Directly beyond that spot sat the race merchandise “shop.”

MERCHANDISE
Though the collection was not vast, it sure was colorful! And after attending the runDisney Health & Fitness Expo the week before, I can say that the prices were downright CHEAP. From $65 for a running jacket to $25 for a hat/visor, I couldn’t resist. (Even better was their promotion: buy 3, get the 4th free!) Which I gladly took full advantage of.

Expo wise? I saw a mere three vendors represented in the courtyard outside; Boston Bill sports sunglasses, basic running gear, and The Wonder Pax heating items. Again, certainly not what most runners are used to, but perhaps a refreshing change?

The Key West Half Marathon Expo/Packet Pickup was open for the two days prior to the race.

THE RACE
Approximately 2500 runners assembled for the 7:00 am start. Though no corrals were used, runners placed themselves in estimated finish times. On the honor system. All was orderly.

THE VIEWS
Key West has returned with a vengeance post-Hurricane Irma. Rarely did we see signs of shuttered homes or businesses. Running through the town felt like a victory lap for its residents. Not many residents were out to cheer. But perhaps this only added to the laid-back attitude of this Key West Half Marathon race.

After a 2-mile run through the streets of Key West, came our turn to the beaches. As the sun rose over Higgins and then Smathers Beach, we ran! It was along this deceiving upgrade that the heat and humidity started to build. The Southernmost Point Buoy was another highlight along the beach run. (As seen at the top of this post!)

Runners were thrilled to see public bathrooms were plentiful along the course, especially at the beach. Additionally, six porta potty stations were available.

As a physical therapist, I was distressed at the lack of Medical Stations- especially with the high heat and humidity. There were folks on bicycles monitoring the crowd during the race, but we all know that runners can go down in an instant.

Though spectators were spotty, those famous Key West roosters were out in force throughout the course. Thanks to them, oversleeping was out of the question…

VOLUNTEERS
The official Key West Half Marathon volunteers made quite the presence on the course! These folks of all ages were animated, lovely, and out in force. (I overheard several runners say they loved their official shirts so much that they wanted to volunteer instead of running next year!)

A heat advisory was posted for race day, so the plentiful water/electrolyte stations were a welcome sight. Seven stations were staffed, although because of the looping nature of the race, it felt like 14.

ENTERTAINMENT
Several local performing artists came out to serenade us.

POST-RACE:
Pastries, bagels, and peanut butter were plentiful. Water and bananas were also on hand. But to be honest, the unlimited Shipyard beer was an even bigger hit! The band! Runners stayed, listened, and drank well into the afternoon.

The Key West Half Marathon culminated in a low-key party. How fitting!