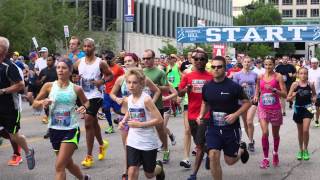 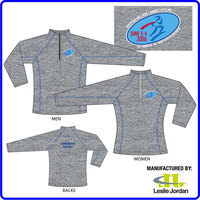 Join us on June 3 - 4, 2016 for the oldest race in Kansas City! Three event distances to choose from, the UMKC School of Medicine 5K, 10K and Half Marathon. For those looking for an additional challenge run the 5K on Friday night and the 10K or Half Marathon on Saturday morning and complete the Re-RUN and receive three medals!
Tech shirts and one of a kind medals for all!
Free and convenient parking
Free downloadable photos for all participants
Great pace team in the half and 10K
Family friendly post race party on Friday night and Saturday morning with lots of food, fun and music.

What did you think of the race? Share your thoughts! Write a Review
Sarah Beth recommends this race
2017
"Hot, Humid and Hilly FUN!"

The 44th annual Hospital Hill Half was held the first weekend in June, in downtown KC. As always, the race was HOT and HILLY! (Although as a slogan, that would probably dissuade people from signing up. )

The expo opened on Thursday, but I didn’t visit until Friday. I was having total FOMO with all the pictures of cool swag popping up on Instagram. Hospital Hill has the best swag I swear. The first year I ran it, we got backpacks. The second year, we got blankets. This year was beach towels! And PJ bottoms instead of t-shirts!! (The jammie pants are amazing and get even softer after you wash them!)

The expo is held at the Crown Center Sheraton convention center each year, which makes for a really good-sized expo. All the usual vendors were there with discounted race entries, cool running gear, and wellness products. My favorite part of the expo is always the big archway with the giant course map.

Since I visited om my lunch hour, I made it a quick in and out. (Nice to know that you can make a speedy pick-up if you don’t have time to linger). I picked up my bibs and then stopped by the service desk to switch my Re-Run 5k + Half to a 5K + 10K. (I just knew my body was not going to cooperate. My new medicine has made the last month really awful for me, and I hadn’t run in a month.) They were super friendly in getting me switched over. And OMG. The bibs! So cute! A rabbit for the 5K and a magic hat for the half!

On my way out, I checked into my room at the Crown Center Sheraton. They made a group of rooms available at great discount rate. (It was half the cost of the room I had originally reserved on my discount travel site). They had a special line set-up just for runners to check-in, so I had my room key and was back on my way to work.

I took advantage of the free KC Streetcar to go back to my office at Power + Light District. (I really should have taken it to the Expo. By the time I was back at work, I was sweaty and my feet had blisters from walking 1.5 miles in my sandals. Bad plan.)

After work, I took the street car back to the hotel and changed into my outfit for the 5K. Friday night was hot and I knew that I had overdone it with all the walking earlier. Since I have poor-heat tolerance with my lupus, and was really feeling iffy, I decided I would just enjoy the race by walking it.

The start line had so much energy! As usual, they played “Kansas City Here I Come” as we took off. (Some of us slower than others! Ha!) Right away, we were rewarded with a view of the Western Auto building, one of my favorites.

The 5K course was unrelentingly as hilly as always. They changed up the course a bit, and I feel like it was slightly easier by not having that one massive hill right away. Just know – Hospital Hill is never “easy” and even the 5K is no exception. The volunteers were so cheerful, so it was actually nice to be able to properly thank them as I went by, instead of the usual hasty “thanks” as I run by.

Soon enough, we descended the final hill and made the left turn to the finish line. There was a huge crowd cheering, and it took everything in me to just keep walking and not break out into a run. I received my medal and headed for the post-race party.

This is a really kid-friendly event with face painting and balloon animals. But I was just interested in the adult beverages. This year’s beer was “Hilltop Hops,” a peach beer from Rock and Run Brewery. My husband received my cup and said it was really good!

And that is really where my race report ends. I woke up the next morning and knew that trying to push myself to do the 10K would be a bad idea. I was too fatigued and it was just too hot. I was pretty bummed as I have had such great runs on that course – even snagging a PR the first time I ran it. I had friends who ran both the 10K and the half, and they had amazing things to say about the race on Saturday. I know for sure, I will be back next year for more swag, bibs, and beer!