Welcome runners to the first-ever Honda Miles Per Hour Run! This unique indoor race challenges runners to cover as much distance as they can in one hour. Not only will this event be indoors, but it will be taking place through the halls of the Chicago Auto Show! Runners will complete loops (approximately 2.4 miles around) through the massive three main halls of McCormick Place, getting a first-hand look at the auto displays. The loop will include a variety of long straightaways, some unique zig-zags, and even an incline as runners run the indoor the bridge over Lake Shore Drive.

What did you think of the race? Share your thoughts! Write a Review
2020
"Auto Show Adventure" 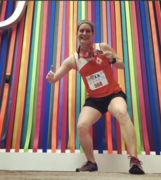 Honda Miles Per Hour Run did not have an expo. There was day of pick up and also several times at Fleet Feet stores in the Chicago area. I decided to do day of packet pick up.

Using the signs from the Auto Show, I was able to navigate to bib pick up and gear check. Both booths were very easy to get through. The volunteers were kind and helpful. No ID was needed to get your bib. For gear check, volunteers were handing out zip ties for marking your check bag.

Warm up was seemingly going to be easy. Little did I know that the actual Auto Show was closed until after the start of the race. This caused some difficulty in getting the miles I needed prior to the race. The actual course was well marked with cones, ribbons and arrows. If you got lost it was because you literally walked off the course.

The start line was not well marked. The announcer herded everyone to the start line. A start sign would have been helpful. As mentioned previously the rest of the course was very well laid out. Since it was inside there were lots of turns. None of the turns were too sharp. I was reminded of a looped XC course from my high school years. Surprisingly there were hills inside! There was a skywalk that runners covered and it was an actual hill. Otherwise, the course was flat.

The course consisted of tile flooring, carpet and cement. The carpeting was difficult to work with because it was slippy. Otherwise the course footing was satisfactory. The course scenery on the other hand was not great. Over half of the loop did not have cars. We ran in a large Honda test drive room with no cars. In the future I would like to see the majority of the course go through the Auto Show even if that means more turns.

Water stops were great. They were long enough to where there were not traffic jams. All the volunteers were super cheery too! As the event went, on the course got harder as there were participants lapping each other. This made it hard for the faster runners to get though the course.

Swag was okay. The shirts were cotton, and I can't say I earned a medal, but instead a rubber. The participant gift was like a medal, but rubber. I think they were trying to have a car tire like feeling of the award. Food after the race was very minimal, a banana and RX bar to be exact. Age group awards are still being calculated. The RD said that later in the afternoon, results would be available. Received an update about unofficial results at 3:00 AM. It is the event's first year, so I understand that things don't always go perfectly, but please keep your word.

Overall I would not recommend this race to a friend looking for a serious run. The terrain is hard to work with as there are so many unnatural surfaces. Travel logistics are a nightmare too. If you are coming from afar and don’t know Chicago, it is hard to navigate. If you don't live close to Chicago, or love cars, I would say risk the weather outside. This race gets a 3.5 total rating from me because it was well run by CARA but was not ideal for speedy conditions.