Write a Review
What did you think of the race? Share your thoughts! Write a Review
Heather recommends this race
2017
"Great neighborhood race" 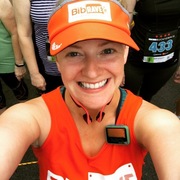 The 2017 RAM Racing Bucktown 5k took place on Sunday, September 17 with an 8:30am start time. I forgot to take note of the weather, but I do recall it was fairly humid out, as I was sweating pretty early on haha. Temps were in the mid-70s I believe. The course was pretty shaded, which was nice. This was my second year running this race.

PROS:
+ Multiple days and locations for packet pickup. $15 shipping option if you wanted it sent to your house. (No race day pickup).
+ This year's goodie bag was a Chicago flag design on a fleece blanket. The blanket is legit – super soft!
+ Course takes your through Bucktown. Lots of spectators and families out cheering.
+ One aid station with Nuun (or just water, I"m not sure – I didn't stop for anything).
+ Corrals A–F; released every 3 minutes or so. Helped with congestion.
+ Mostly cleared streets with the occasional parked car you have to weave around.
+ Plenty of volunteers and officers out keeping the runners safe and on course.
+ Post-race you receive a bottle of water, banana, and a bag filled with treats – plain bagel, Clif mini, Soy Chocolate Milk, rice krispy treat, and piroucrisps. They also had cups of Nuun.
+ Post-race DJ, games, photo ops with RAM Racing backdrop.
+ The neighborhood is filled with lots of great places for breakfast/brunch.
+ Not a ton of porte-potties, but the lines weren't bad at all.

CONS:
- Parking wasn't as easy for me this year as it was last year. I was over an hour early, and the place I parked last year was already filled (pretty large stretch of street and both sides were filled... might have helped if people didn't leave such giant spaces between one another, but even then it might have filled up before I got there). Since lots of the street parking is taken away from residents, it means any places you can park are filled. We ended up parking maybe a mile away and paying a parking meter, which was fine, just something to think about. It's your typical Chicago location – hard to find parking haha.

This is a nice, low key event with a lot of families running together. Running on the streets means less congestion for most of the race. A few spots where it might be a tighter squeeze if the street was cut in half for out and back type thing, but it wasn't bad. I love the unique swag they come up with every year and like the post-race eats in the neighborhood afterwards. Definitely a race to look into.