Write a Review
What did you think of the race? Share your thoughts! Write a Review
John Niedzwiecki recommends this race
2014
"Zombies, Obstacles and Mud, Oh My!" 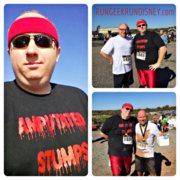 Packet Pickup was simple and that day. When I say "packet" I more mean "bib". You simply came in, signed a waiver, walked up to one of 6 windows and got your bib. Nice, easy, simple. The course location was in Bull Run Special Events Center. This is just off of rt 66. While it's near the highway, the first time or two i went there it was pretty confusing. By now this was simple for me to get there as I been there for many things, but for a first timer, it is deceptively tricky. There was plenty of free parking right next to the course. No worries. The course looped back and forth maximizing the space, with one main hill that you hit twice, though the first time was followed with a giant water slide, so well worth it. I've run here before and it works well for a 5K. The only issues with the course were the way in which they did some mud, but I'll cover that in the race portion.

Some people costumed up for the race which was nice. There were people as zombies, general Halloween costumes and some zombie slayers. I saw one girl with a corset zombie killer outfit on complete with two play guns strapped to her back that was pretty sweet as well as a little 3 foot tall Captain America. They came in all shapes and sizes. I opted to use this as an option to break out my team shirt from my intramural softball team from college: the Amputated Stumps. It just felt appropriate.

The obstacle course was fun but just challenging enough. It was not (and nor should it be) on par with an obstacle course on the level of say a Spartan Race or Warrior Dash, but I wouldn't expect or want it to be. There was a fairly large number of "up and overs" as I'd call it: small wall, tall plank walls, inclines with ropes, etc. Spread throughout the obstacles were muddy patches. I say it that way for a reason. They didn't feel like enough to be an obstacle or a part of the race like a mud run, but were more than just mud developing from all the runners in that portion of the field. It felt more like someone decided "Hey, let's mix it up. Hose down the straight aways so it gets muddy." I'm not saying that's the way it was carried out, but just how it felt at times. It didn't always seem to server a purpose, nor did it feel like it was thought through to balance the amount of water properly to get good mud as opposed to just muddy and flooded areas.

I ran this race with my namesake John. We had a blast on the course though and I enjoyed the company to chat while we ran. My favorite story has to be the army crawl section. One obstacle was simply titled the army crawl: netting set low to the ground over mud that you were meant to crawl through. One side was all water the other mud. Naturally, most people, including us, chose the mud side. When you got down in it, we'll just say it smelled "country" so we did hands and knees as opposed to down on our chest. We come out the other side and John makes the remark "What, you didn't army crawl? Where's the mud?" Just as he finishes, karma hits. He slips falls straight down on his back. He gets up, does a little slippy slide and back down again, this time on the front. Covered in mud. Oh so funny. I of course didn't dare laugh until I was across the puddle though. He's faster than I am, so really helped push my pace early on. It felt good and I kept pace, but by the end I was gassed and let him finish strong ahead of my slower pace.

After finishing the race, you were greeted with a nice little medal and your cotton t-shirt for finishing. Pretty nice swag for a small little 5K. As you walked down further, they gave out protein bars. Not one, but one box full. A nice unexpected bonus.

From there, we wanted to hit 2 important things (after hosing off some mud): the food trucks that smelled so good and the beer garden. We had an 11:30 am start time, so it was perfect time to eat. We chose a truck that smelled wonderful: the Urban Bumpkin BBQ. The whole menu looked fantastic. I chose the Alaskan frybread taco, with Asian beef brisket. Oh my goodness did I choose wisely. I had several people telling me after seeing mine they were mad they ordered anything else. I was not disappointed. It was well worth however many points it would cost me, not that I bothered trying to find out how many it would be. From there we took our food to eat in the beer garden, featuring 3 craft brews: a pumpkin beer, an IPA and an amber ale. I can't remember where they were from, but I know at least one (if not all) was local. Nothing like a food truck plate and cold beer to celebrate the race with.

I got my ticket for free from Party City for giving them a lot of money, so it was great value for me. Nearing the event, they were charing $79, which would be way over priced. There was however a Groupon up until 2 days before for $39, so as long as you did simple searching, it was a pretty good value. The t-shirt was cotton, but nice and the medal was small, but still cool. Pretty good value for the price, especially when you top it off with all the protein bars.

I had a really good time on this race. I wish I had been running more recently so I wasn't so gassed at the end, but I enjoyed myself. It was just tough enough without being overbearing. It kept it's fun. The main downside was the odd thing about the mud that I mentioned. I have no problem with it being "an obstacle" of the course but it felt so haphazard that it was hard to enjoy. It felt less of a challenge and more of an hinderance to the rest of the race. I was pleasantly surprised to earn some bling and had a good time. Weather was perfect, and the course route was nice. I enjoyed and would do again.