Write a Review
What did you think of the race? Share your thoughts! Write a Review
Erin recommends this race
2016
"A scenic half marathon! " 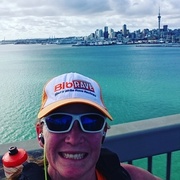 Wow, what an awesome race experience! It's a big city race with that nice small town feel! The Auckland Marathon (Half Marathon) has been a bucket list race of mine and I've seen it sell out in previous years so was straight on it when registration opened in 2016.

Registration: I registered online and there was seperate pricing for AU/NZ and other internationals. Online registrations closed the week of the race, however at-the-expo registration was occurring.

Expo: You can't get a better place in the world for an expo than on Auckland's Harbour! It's an amazing location with the greenest water. Located in the Viaduct Events Centre (and opposite the main sponsor ASB's head office) the Expo wasn't too overwhelming but delivered. Packet pick-up was a breeze, with seperate sections for the 5K, 12K, Half Marathon and Marathon races. As you walked through to the expo side your chip was checked to make sure there were no issues on race day. As usual the sponsors had the biggest spots - ASB offered taping for the customer's or with a donation to charity, Asics had their retail set-up and there was a range of other races & vendors.

Swag: You received your packet in a yellow Auckland Marathon bag, which was intended to be your gear bag. What I liked at Auckland Marathon was that your bib & gear bag tag was actually in a seperate sealed plastic bag which also included race instructions. You were also given your transport band (for ferry or bus dependent on the race). All participants received a race shirt, which was Asics branded and had the Auckland Marathon logo on it, followed by the specific race. While the race provided a size chart and said the style was slim fit, these were really slim. I picked up my medium however couldn't even get my arm through the sleeve! The event organisers were super proactive about the issue and communicated that we could change (unworn) shirts after the race at the finish village. I ended up with a 2XL for a nice casual fit (which fit like a M/L).

Transport: I stayed in a hotel close to the Queen St Ferry Terminal, so it was no issue walking over at 5:30am. Ferries for the Marathon & Half Marathon runners started at 4:20am and finished at 6:30am - leaving every 10-15 mins. Boarding the ferry was quite a simple process, and there was plenty of boats leaving around 5:45 for the 15 min journey over to Devonport where the race starts.

Amenities: There was plenty of amenities at the start line - so many portaloos which made for small lines! The bag drop was simple - place your bag (with the gear bag sticker on the handles) in the corresponding orange bag with your bib number. At the end they'll be laid out ready for collection!

There was no corrals at this race, rather a self seeding process with estimated finish time placards listed at the side of the start line. The race was for both runners and walkers (designated by their different coloured bib).

Course: I'm so glad that I explored Devonport the day before the race so I knew that it would be hilly in the first lot of kilometres! The race itself starts on the flat, just in front of the North Head Volcano Cone, on the shoreline (amazing at sunrise!), we then head towards the North Shore and make use of the transit areas (where they close off at a certain time and bus those to a further point on the course) before hitting the bridge at about the 14km mark. And this bridge is NO JOKE! What was awesome were the drummers at the bottom of the incline which really lifted the spirits - as well as encouraging those who wanted to Blitz the Bridge - for the half hour competition that was running. After coming off the bridge there was another hill, before hitting the 16km mark and it was flat to the finish! The only part of the course which I felt was bare was around the 18km mark when you're running in sort of an semi-industrial area before hitting the Viaduct. There were a whole bunch of supporters lining this part of the course though which was great! In fact, the crowd support was awesome, with so many Aucklanders getting up to cheer on the runners!

Finish: The finish area was awesome! Marathon and Half Marathon runners both received medals, after picking up a banana and Powerade (if that's your drink). There was no water offered sadly. Luckily I had some extra in my Orange Mud pack! I headed straight to the Runners Resources area to change my shirt - since it was the longest line I assumed I was in the right spot - it only took about 10 mins to exchange shirts. All the sponsors and charities had big set-ups which encouraged people to stay the whole day. It was a great environment to relax and have something to eat!

Overall this was such a great big city race - it was still very personable, rather than be a huge race. The course is scenic, and I'd imagine the marathon would even be more so since it goes through the city. At parts of the course the road was shared with traffic, separated by traffic cones so care was taken by all runners to not push and overtake each other with caution. I would definitely run this one again, and if you love travelling to race put this one on your list!