Write a Review
What did you think of the race? Share your thoughts! Write a Review
Ciara Doll recommends this race
2021
"Fun on the 4th! " 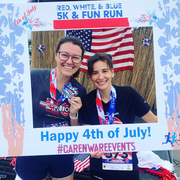 This was my first "mass start" since in-person racing returned -- and with the fun start and community atmosphere, this 5k made for a great holiday weekend event!

Pre-Run:
This is my 2nd time racing with Caren Ware Events, having run the Rodeo Run back in March. I signed up for this race online to run with my friend. The race was originally set to run in Anaheim, but since the race had been cleared to host a mass start instead of waves, it moved to Irvine Valley College to accommodate the larger crowd. This information was very clearly communicated by the race organizers and was much appreciated! While there was no pre-race packet pickup expo, there was a small expo set up the morning of that offered a number of future race registration opportunities and product samples. Parking was RIGHT next to the starting line (which you all know was a big plus for me!) As the crowds gathered and we got closer to the starting time, a FIFE AND DRUM BAND SHOWED UP! The band played along with live singers and a red/blue smoke bomb start!

The Race:
The course was one circular, flat, out-and-back circling the perimeter of the campus. There were a few fields before the first 0.5 mile marker that featured a charming farmhouse, but other than that, there wasn't much in the way of course scenery. There were two aid stations at the 1 and 2 mile markers. with friendly volunteers offering plenty of water!

Post-Race:
Here's where my only complaint for this race kicks in. The race was advertised as a "Red White and Blue/BREW" race with the option to have a special beer-themed medal. I was under the impression that a post-race beer would be available after the run to match the theme, however that was not the case. (Not a huge deal, but I had signed up for the BREW medal and it felt odd to have a beer-themed medal without any other beer elements in the race, so I traded it in for a normal medal instead.) Upon crossing the finish, we all received a nice sliding medal and a flag t-shirt (in a very...bold pattern.. haha!) the band had returned and I made sure to get a photo with them in their colonial costumes!

Tips:
(I don't have any for this race! It was straight forward, well managed/supported, and had an easy course perfect for all types of runners!)

Final Thoughts:
Despite the confusion in the alternative themes, the patriotic race had a fun, festive atmosphere, easy course, and a well-organized group running the show! If you're looking to get your family involved in an annual holiday fun run, Caren Ware Events has a great 4th of July option!