This is definitely one of my top 5 races. The race director is one of the most friendliest people you'll ever meet. Every volunteer is simply amazing and truly cares about helping you finish. The course is 10 loops, the first being 11 miles and the rest 10 miles. It's 99% trail with lots of beautiful forrest and occasional wildlife. The weather is great for running. It's mostly cold with some warmer temps in the middle of the day. Each loop has 3 out and back sections so you're always seeing people which makes it more fun and exciting. The aid stations are always well stocked with options, especially the loop start/finish station. They have a DJ there too that keeps you going. The swag, including the buckle are great. If you run it under 30 hours to qualify for Western States. Many, including myself camp out the night before at the main area of the course. I highly recommend this race! Oh yeah, free race photos!!!

Link to this review
Login or sign up to leave a comment.
Phil Patterson Jr recommends this race
(2020)
"I didn't shoot my eye out!" 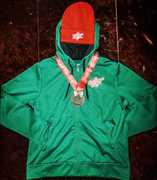 DISCLAIMER: I received my entry into the A Christmas Story Virtual 5k to review as part of being a BibRave Pro. Learn more about becoming a BibRave Pro (ambassador), and check out BibRave.com to review, find, and write race reviews!"

Growing up as a kid, I always watched the movie A Christmas Story. Like most of us, we have favorite scenes that we mimic even to this day. Despite being solely focused on training for 100 milers, I decided to sign up for this race. I thought it would be fun to run harder and faster for a little bit, while also not putting pressure and major expectations on myself. Knowing that I only had about a month to train and that this would definitely be my slowest 5k ever, I set out to give it my best shot and have fun.

The first week of training was brutal. Going from casually running 10 minute miles to pushing for 8 minute miles was not easy. My legs weren't used to the lactic acid build-up as quickly and my lungs were screaming for mercy. Every day on my lunch break I would head out with the goal of finishing within my allowed 30 minute time for lunch. Each day got a little easier and I found myself tweaking my strategy with each run, in hopes of knocking time off.

I started to notice big chunks of improvement with each run as my body adapted. As the breathing felt more controlled and the legs felt stronger, I was able to try different techniques. On some runs I went all out from the start to see how long I could push at 90 to 100% effort. During those runs, when I finally was forced to walk, I would finish the runs with as many sprints at full effort and walk breaks in between to catch my breath that it took. On other runs I would keep the effort around 85 to 90% to see how much time I could knock off from the total. I started to notice that both techniques were basically keeping me around the same overall time and one wasn't much better than the other.

I originally set out to run it on Christmas day but decided otherwise as the day was quickly approaching and I knew I wouldn't knock much more time off by then. At that point I had gone from finishing in around 30 minutes to 28. I originally had hopes of anything 25 minutes or less but kept my expectations realistic with all things considered. Also, as much as I was enjoying the speed, and feeling like I looked cool again, I missed the fun of the longer and slower ultra-marathon training runs. December 9th, while getting ready to go for my lunch run, I decided to just turn it into "race day". I felt good and decided mentally this was probably the best day to go for it.

The first mile was fun and brutal at the same time. I actually felt good at first but slowly noticed the windy conditions affecting my ability to stay in a rhythm. The first mile ended up at 8:02 and I just knew a walk break was coming soon. I made it another minute and finally had to take a walk break. I was a bit disappointed but didn't allow myself to dwell on it. I power walked for a couple seconds and started my sprint until I couldn't run anymore. I kept this up for the rest of the race. I was happy to see the second mile end up at 8:34. I knew there was a shot to hit 25 minutes though I was now facing a strong headwind the rest of the way and my body was quickly falling apart from this unusual effort.

As I approached my street where I would have one u-turn and a finish at my house, I knew I had enough in me to push as hard as I could without taking any more walk breaks. As I approached 2.95 miles and passed my house, I heard "look who it is, there's daddy!" For the first time ever my wife and son were going to be outside to not only see me finish a run, but a race. This was not intentional as I didn't even tell my wife what I was doing. I felt another level of excitement about that and found a little extra kick. Mile three popped up on the watch at 8:39 and although I knew 25 minutes was missed, I was still about to run the fastest since I started training and by a couple of minutes. I made the u-turn and sprinted home as my wife and son stood watching and my son yelled in baby talk. I finished in 26:06 and wanted to die!

I picked up my son with the little energy I had in me while telling my wife that I couldn't believe I used to run 20 minute 5k's pretty easily. A couple of weeks later the swag arrived and I absolutely loved it! The medal is pretty cool, and although that's usually what us runners sign up for, this time, I was looking forward to the hoodie and beanie, despite living in South Florida. It's too bad we couldn't also get that cool leg lamp from the movie or a Red Ryder BB gun, though I'd be afraid of shooting my eye out. HA!

As I look back on the race and training, in some way's I miss it, and it other's I don't. It was definitely fun to switch things up, and one day I may chase a 5k personal best, but for now, this fun virtual 5k was enough for this Christmas season. I was also reminded that the movie is only 6 months and 12 days older than me, though that might offend some of you older folks. I definitely enjoy

Link to this review
Login or sign up to leave a comment.
Phil Patterson Jr recommends this race
(2020)
"One Big Family! "

I've done this race 3 times and I'm already signed up for year 4. I absolutely love this race. It's my #1 race hands down. It's a 2.5 mile loop mostly through a covered trail with some sections in the open grass. It's definitely a hot and humid race. There's one main aid station at the start/finish area and the volunteers will make you feel like family. Actually everyone will. I've made so many great friends each year running this. You actually get to choose from two 100 mile buckles, whichever you like more. There are multiple distances and all of them get 40 hours to complete. This is definitely your race to choose for your first 100. Many people camp out the night before and there's a huge covered area people set up under as a secondary air station. The race director truly cares about everyone who's in the race and will do whatever he can to help you finish. You park right next to the course and can actually access your vehicle on each loop of needed. You won't regret this race.

Link to this review
Login or sign up to leave a comment.
Phil Patterson Jr recommends this race
(2019)
"Flat and Fast"

I've done this race a few times and each time was a different experience. It's been 42 degrees and it's been 90 degrees. The course is mainly up and down A1A with some of it through downtown Fort Lauderdale, a park and a neighborhood in Pompano Beach. You don't get to see much of ocean unfortunately and you'll spend a lot of time solo as most people do the half. Once they hit their turn around point it gets pretty quiet, especially with this race not drawing crowd support. The aid stations are pretty good and the volunteers are helpful. Busses take you back to the start line where you parked so that's a benefit. The after-party on the beach is nice. Other than the one bridge, it's very flat and Fast, as long as you can tolerate the heat and humidity. The ending is the best as people are out and about and cheering you on. The medals are always awesome!

Login or sign up to leave a comment.
Phil Patterson Jr recommends this race
(2016)
"Favorite race experience ever! "

I got to run this race by raising funds for Team For Kids. The bus ride from my hotel to the race was very helpful. I still get goosebumps talking about this race. Almost the entire course is lined with crowds cheering you on. The crowds had me so pumped that I definitely went out too fast and paid for it in the end lol. The little kids sticking their hands out for high fives was awesome. You're always surrounded by runners so there's never a boring moment. I really enjoyed the beautiful running weather. The brisk cold air was constantly refreshing. The course is tough for a south Floridian that doesn't have hills or much elevation change to train on. The aid stations were definitely well stocked and the volunteers were always helpful and friendly. I enjoyed the different entertainment along the course as well as the views I'm not used to seeing back home. Finishing with the crowd cheering from the bleachers was a really cool experience. The after race experience is a bit disappointing as you walk about 1-2 miles to get your jacket or check-in bag and leave. We got a hotel less than a mile from the finish so we got to celebrate and hang out in Times Square with others.