The Jersey Shore Half Marathon is a great long distance race for the fall. It can serve as a training run for a spring full marathon, or a way to get in multiple halfs in a year (my goal). It also is one of the best NJ races for a PR. This is because to course is mostly flat and race. The course consists of out out and back loop—that is done twice. As someone who is not big fans of out of back races, this can be a bit boring for some runners. There was changes to the course to not pass the lighthouse, so be prepared not to have many views. There are no hills, but a section or two with an incline. It is completely ran on the paved road.

This race is on the smaller scale as far as participants compared to the other big NJ ones, but still has a nice turn out. There is no race expo or pre-race packed pick up. But there is free and ample parking and all races get a T-shirt and medal (upon finishing.) There are plenty of aid stations along the way with enthusiastic volunteers. Family and friends can even bike along the course to cheer on their runner.

Overall, this was a great fall race for a PR (which I did) while getting ready for spring halfs.

Link to this review
Login or sign up to leave a comment.
Lauren Keating recommends this race
(2018)
"One Of The Best Mostly Flat Halfs In NJ"

After running a few halfs in New York, I couldn't wait to run my first in New Jersey as an official resident. And I am so happy I chose to run the Novo Nordisk NJ Half Marathon this past spring. The course was mostly flat with the exception of crossing a bridge, scenic and had lots of cheer squads along the way for that extra push of motivation. Plus the swag included a nice black T-shirt and medal that is a great addition to any collection.

The event kicked off with an expo starting on Friday and ending on Saturday at Monmouth Racetrack. It was organized and had ample parking. Family members could create signs and take pictures that were printed out right on site behind the half and full marathon logos. The only slight disappointment was the small gear section for merchandise, but still was able to pick up apparel (I opted for a NJ Marathon hat) that I still wear during rainy day runs.

Sunday morning was race day and the excitement can be felt in the air. The weather was perfect—a great spring morning without rain. Parking was free, which was great, and there was a shuttle from the starting line to finish line at the boardwalk for easy access for supporters and participants. The bathroom lines were LONG at the starting line, so just make sure to get there early.

The course was flat and fast, great for a PR. It took runners through the beach towns on the way to Long Branch. Just keep in mind that the only beach scenes are towards the end of the race. There were ample aid stations with water, Gatorade, and even residents who set up camp on their front lawns giving out waters and snacks.

Arguably the best part was the amount of support given throughout the course. There were families and friends cheering runners on throughout the course, which was very motivating. Both full and half marathoners ran together for about 11 mile before the marathoners went off a bit further before meeting at the finish line. Finishers received a medal, boxed water, got photos taken and had food. The post-race party included a free beer with live music and food. This was a race to experience in NJ for sure.

Link to this review
Login or sign up to leave a comment.
Lauren Keating recommends this race
(2014)
"Iconic Race For New Yorkers" 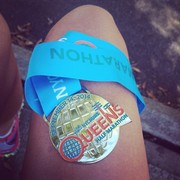 It's been a few years since I ran this half marathon, but it is among my most memorable. I didn't PR, but it was one I won't forget because I had just moved from Flushing, Queens at the time. It was in Queens where my love for running started. The course allowed me to retrace my footsteps at the iconic World's Fair site, making it a very scenic course. I do remember there being hills and quite some inclines, so make sure to train on hills for sure.

The medal is among the best swag in my collection, and there were plenty of aid stations throughout the course. I remember it being hot that day, still shorts weather and unfortunately didn't stay for any post-race run on site. However, this is a half marathon I recommend for anyone trying to run all the boroughs or looking for a good NY race.