Kaydee recommends this race
(2017)
"Great course BUT not as fast as you'd think! " 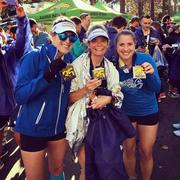 Sorry this is long! But I personally love to read detailed race recaps from runners, because it helps to get a better feel for the course!! ;)
I chose to run CIM, because I had heard that it is a fast course with very reliable weather! I normally run my marathons in the Fall (October), but the past few years October races have just been too stinkin' hot! CIM being in December, seemed very appealing to me, because it was better assurance for cooler weather.
I love everything about this race. The people were super friendly. The volunteers were helpful. The aid stations were awesome, and the pre race port o potty situation were perfection! I have never seen so many port o potties lined up with NO LINES! A runner's dream! haha!
The buses that took us to the start line were right on time, and we had the option to stay on the warm bus as long as we wanted before the start.

Brief Race Recap:
The weather was absolute perfection. Low- mid 40s at the start and throughout the entire race I never got hot, which was awesome. I was prepared to start out a lot slower because after looking at the course, and speaking with people that had run the race before, they said start slower because the rolling hills are deceiving. I was also told to run with the CIM pacers, because they are great and they run 2 min fast to increase your chances of BQing. My goal was to run a 3:30-3:32 to assure my spot into Boston, because my qualifying time is 3:35:00. At the expo they nixed the 3:35 pacer and it went from 3:37 to 3:32... So, I spoke with the 3:37 pacer about strategy and wanting to run with them to start out slower. She told me they run even splits, so my strategy was to run with them until the half way mark, see how I was feeling and then speed up...I stayed with the 3:37 pacer (which is supped to be a 8:17 pace) until mile 10-11 and we were averaging around a 8:05 pace. I take full responsibility for pacing, but they were going way too fast to start with, but I felt great so I stuck with them. I was really running by feel, and I live and train in Colorado so the sea level felt fantastic. Around the half way mark I evaluated how I was feeling and I sped up, leaving the 3:37 pacers, but did not go all out. I was saving that for the last 10K.

Anyone that tells you that the hills end at mile 16 are NOT CORRECT. The rolling hills last until MILE 20-21 so mentally prepare for a lot of ups and downs for a long, long time. I paced myself well on all of the uphills, by slowing my pace by 15-20 seconds on each uphill, and maintaining control and good form on the downhills. I felt absolutely great busting through "The Wall" the 20 mile marker where they literally have built a little wall you run through! Around mile 21 I decided it was time to try to kick it in a little bit. My cardio was not my demise, neither was my mental toughness. The course from miles 23-26.2 was my demise! It goes from 20+ miles of rolling hills, to absolute pancake flat that last 5K...It says downhill on the course elevation, but it's such a slight downhill it makes no difference. It's pretty much flat... My quads were NOT having it. I literally could not get my legs to go any faster on that part, and that's where I slowed down enough to not get that 3:31-3:32 that I wanted. I trained on lots of hills, and did a fair share of mountain runs at high altitude, so my legs were great on the uphills and downhills, but it was that drastic change in terrain that killed me. I think if the course continued to have some ups and downs throughout the entire race my goal would have been met. I ended up coming in literally on the dot 3:35:00. I PRed by 9 min and technically got my BQ, but not by enough to get in. Overall, I really enjoyed the course, but it is not as fast as it's advertised. Be ready for 20+ miles of hills, and a drastic change in terrain that last part of the race. I would definitely run it again, but maybe with a different strategy. I feel I paced it perfectly for me, my mental game was on point, but that flat part ruined my quads. Maybe more strength training?? No idea.. I need to speak with my coach about a different strategy, if I ever choose to run this one again! I highly recommend this race though! It was a fantastic weekend and the volunteers and staff were great. The only CON about this race is that it is not that spectator friendly, because it is a point to point. I had my husband meet me at the 13.1 mark (which he had to get an uber to and streets were closed) and then again at the finish line. If your spectators are familiar with the city of Sacramento, than I think it will be easier for you, but this course isn't like other races that have loops where you can see your family/friends at various points along the course. That is really the only downside! If you truly want a fast race I always recommend Chicago! Fast and flat! ;)