Modesto Marathon is only 15-20 minutes from me but I was still worried about being late. I overslept the year before and go to the race late, but that is another story for another day. That weekend went really well. The expo was great, was able to get plenty of goodies and my t shirt and jacket - side note: We were able to try on different sizes for the jackets to find the one that fit just right, this was a huge plus since most of the time you get what size you put down and pray it fits. Was able to get in and out pretty quickly, although waiting outside in the lobby for the doors to open felt like it was going to take forever, I am very impatient.

Race day was full of music, excited runners, photographers and plenty of corrals and pacers to keep you on track. I began running with the 3:45 group and ran next to the current Guinness World Record holder for running while pushing a triple stroller. I had never ran with a pacer before but I felt comfortable and a lot of the runners were spread out it was nice to have a group to run with. There is one hill, "Mount Modesto" and it is an overpass that takes you to the west campus of the local junior college and then through the farmland of Modesto. I eventually broke away though around half way through. Although I wasn't putting pressure on myself, I had a goal in mind and wanted to stay focused. The aid stations felt very far apart and although they had water and gels, I had my own, I could have done without the warm green and yellow Gatorades, why don't races have the good Gatorades? The race is pretty much a huge loop so yep you guessed it, it is back up "Mount Modesto" but once you on the other side of that hill or overpass, it sinks in. You are almost done, more music, cheering and the urge to push through hits you like a ton of bricks. I did not realize I was going to hit my goal until about mile 11 and even then I did not believe it. I have a tendency of subconsciously pulling back after I realize how fast I am actually going.

Suddenly, you are turning the corner, the finish line is right there. Crowds of people cheering, service men, families, locals, fans of running. And then you look up and there is the clock, you realize then that you are about to crush your goal. Not only are you going to have a HUGE PR, you are also going to BREAK 2 in your 2nd half marathon!!! You cross the finish line and are greeted with a medal that is bigger than your face. This was an incredible experience where everything went extremely well as if it was meant to be.

I would highly recommend this race to anyone, mostly flat, fast course with a high chance of a PR!

Link to this review
Login or sign up to leave a comment.
Deidre Silva recommends this race
(2017)
"Once in a lifetime experience" 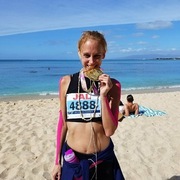 I was blessed to win a free race entry into the 2017 Honolulu Marathon via BibRave's BibChat. I was ecstatic to be able to run a dream race for free but until the flight was booked, I didn't believe I was going. Fast forward to arriving in Honolulu, Oahu, Hawaii. Runners everywhere and full support from locals and businesses. The expo was huge, with more than likely 100 plus vendors and booths. Although it was a crazy day, everyone was welcoming, kind and helpful, was able to get in and out pretty quickly.

Race morning came early, last call for shuttle was at 4am, thankfully I was only about a mile away. The shuttles were organized, clean and quick. Music, eager runners and sprinklers, yes, the sprinklers came on while we were waiting. If you weren't awake before, you were after you got hit with cold water at 330am.

The start line was full of music, corrals and plenty of music. But it was at a park and the ground was really wet so step wrong and you step in a whole lot of mud. BUT you can't beat fireworks at your 5:00 am starting line.

The race itself was hot and humid from the get go until I got to about mile 10 where it started to pour down rain and got extremely windy. It was a nice cool down but have you ever tried to run a marathon where everything is soaked? It is not fun.

But wow was it worth it, the hills, oh man the hills. I was not prepared as I come from a completely flat city. At about mile 24 is when you hit Diamond Head and Honolulu's own "Heartbreak Hill" This hill was killer but a great accomplishment if you are able to push through and get over it. This course is mostly hills, not mostly flat. The locals come out though, there are people everywhere, cheering, playing music, providing food and beer (yes, there were some college guys offering beer right at "Heartbreak Hill"). There is also no time limit which was refreshing for a first timer like me. The finishing line was one big festival. They had malasades ready for all the runners which were delicious. Only complaint I would have for the finishing line was trying to find the booth to pick up our finishers swag. Several runners had to ask including myself, and we find out it is all the way in the back of the festivities.

But honestly, no complaints. I finished in 5:22 and I cannot wait to tackle the course again, this time with more training on hills of course.