I had high expectations for Marshall bc I’ve heard great things about it-flat & fast, perfect for setting PRs or getting a BQ.

And while all that may be true for some, it wasn’t for me. I ended up with a rouge pacer and race start temps at an unseasonably warm 60 degrees (which meant highs of mid-70s by race completion) - both of which dashed my hopes of a 3:35 race and a 2019 BQ. The 3:35 Pacer was running 7:50s for the first 5 Miles, then 8s for the next and while sustainable for the half he was planning on running - since a new pacer took over for him at the half and he left the course - it wasn’t for the rest of us. I should have just bailed on him-but I kept thinking he was going to adjust his pace and slow it down to the 8:13s his pace sign said he would run...alas, nope. In fact I believe I was the only runner in our group who even ran with him at all-they obviously got a clue earlier than I did.

Everything else about the race was okay-could use better signage on the course and the water/Gatorade stations were small-you had to pay attention if you wanted water bc if you missed the two people handing it out you would end up w Gatorade instead.

And one last tip-the course map on the website is woefully not to scale in any way shape or form-so if you can, drive the course (some is in a park so you won’t be able to do that) but at least you’ll get a sense of road conditions and turns. It’s a
loop-marathoners run it twice-and if you aren’t careful you can get turned around and volunteers at intersections while friendly, seem to only know about their spot rather than the whole course.

Overall I’d say run this but be aware, it’s small number of participants may mean that pacers are just people who were available that day and not people who are familiar with the level of responsibility that entails.

Race finishes inside the Marshall University stadium, and as you enter they hand you a football-and it’s neat to cross the goal line at the finish, but overall I was just disappointed in how the day went for me.

Link to this review
Login or sign up to leave a comment.
Myrdin recommends this race
(2017)
"Burbon, Bluegrass, 13.1 and you! "

The UBHM is a fantastic way to wrap up the Louisville fall run-a-thon series. Course is really split into thirds: flat and fast start, mid-course hills, then flat and fast finish. RD is an established runner who takes course specification very seriously-and invites community members to participate in weekend training runs of course and other areas to help participants gain confidence (rather than feel intimidated by) Cherokee Park’s scenic loop hills. Lots of pre-race communication (via email and social media) and website was always up to date. While many athletes look to hit PRs (and often do), this race encourages participants of all skill levels and local running store Fleet Feet provides pacers to help everyone cross that finish. Super swag (comfy long sleeve tech tee & stellar medal). Great staff, volunteer support and the after-party with Bourbon, Bluegrass music, and Burgoo is the best! Highly recommend for a runcation or as part of fall marathon training. Date already set for 2018-never too early to start making plans!

Link to this review
Login or sign up to leave a comment.
Myrdin recommends this race
(2017)
"It’s the Great Pumpkin Charlie Brown! "

Second race in the fall runathon series, this one always has a particular set of challenges-mostly as a result of October weather which can be spot on for racing one year and miserable the next.

Expo is at a local sporting good store, so it’s really just a packet pick up, and shirts are usually true to size. Overall an easy in and out.

Course is at the Parklands-and I’d suggest to participants to plan a training run there before the race. Course itself is a mix of concrete running paths and paved roads, with a significant hill. Parking is on site, but if there has been any rain the field can become flooded and then a shuttle service could be provided.

Lots of vendors at race site, good post race fueling options, and awards handed out in a timely fashion.

Good experience for both runners and walkers, not necessarily a PR course, still a fun part of the series.

Link to this review
Login or sign up to leave a comment.
Myrdin recommends this race
(2017)
"Elevate Your Run" 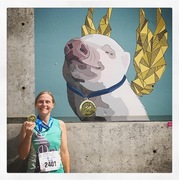 This is a spectacular get away run-cation experience!

Registration is easy to navigate and race communication is clear and timely. Lots of options for athletes to participate in multiple events all with fun titles connected to Skyline Chili.

Course is challenging-the elevation is steady and not for the faint of heart. Seriously: 1344 feet of elevation on this course for the full. I would
Definitely advise Hill repeat training in order to conquer this course.

Definitely a great event and weekend. Suggest staying in a downtown hotel to be able to walk to start and avoid parking hassles.

Link to this review
Login or sign up to leave a comment.
Myrdin recommends this race
(2017)
"KDF Mini & Marathon "

While this year there was a lengthy delay due to weather, which may have impacted runners later in the day (as it was rainy in the morning then temps increased rapidly), overall this race is well organized, with well marked aide stations (with great volunteer support) and an easily navigated route. Some hills (after the half you end up in a beautiful local park that has hills miles 15-17), but elevation overall is minimal. I’ve run both the half and full distances and have never been disappointed. Highly recommend to anyone looking for a Spring race in which to achieve a PR or a BQ.

The only hiccup runners ever seem to have is at the finish line, where the logistics get a bit muddled-and often marathoners may find that after race fuel is lacking (it seems a lot of Half Marathon participants double up on the chocolate milk and bananas), but it’s easy to find your family in the reunion area once you get past the post-race snack area.

Note: this race is always a highlight of Derby Festival activities and hotels book up fast if you are traveling from out of town. Parking downtown can be tricky as well, so plan in advance.