Dam to Dam is an iconic race, and it lives up to the it's iconic status. As a point-to-point half marathon it is a great offering.

The course -- You start at the Dam outside of Des Moines, bused out there from the finish line. This is neat, and really cool that you can see the finish area from the starting line. From the first dam, you work your way in a net downhill towards the finish line, hugging the river for most of it. For a large section, you are out on paved country roads, and then slowly make your way into downtown. As you get into town you cross the river and get to the finish line in downtown Des Moines. It's a neat course.

Aid Stations -- There are great aid stations about every 2-3 miles. With water, Gatorade, and gels all along the path. They make sure you get what you need -- provided it's a usual suspect.

Swag/Expo -- This race has some of my favorite swag. The race shirt is a plain colored drifit shirt with the race logo. Since they only have one sponsor -- and all workers are volunteers -- they don't have a shirt filled with corporate logos. Instead it is a clean shirt that you can wear anywhere. Also, you get a pair of Brooks running socks! They are awesome!

The expo itself is really cool as well. They make sure you have a chance to eat and get free dinner -- if you are willing to chow down on the offerings at the expo. They really treat the runners like royalty.

At the end of the race, you get a solid, good-looking medal. It's a nice set of swag and benefits.

Finish line -- At the end of the race, there is a full 4-to-6-block party with food, drink and just snacks. If all you want is some fruit, it's there. If you want something more substantial, like a BBQ sandwich, it's there. Do you want some chocolate milk? It's there. How about a beer? Yup, they got you covered.

Overall, this is a race that is well worth running. And unfortunately, 2018 is the last time it will ever be run. So you should really try to sign up while you have the chance.

Link to this review
Login or sign up to leave a comment.
Michael Mason-D'Croz recommends this race
(2015)
"Hilly and awesome. Loved it."

I ran this race in 2015 and it was a fun one. I ran it with my wife, and until the finish we kept together. It was a challenging race with lots of hills -- which for a flatlander like myself was a challenge.

The course -- Hills. Hills. Hills. But the scenery was great. It is a nice loop that gets you through much of the town and lets you see many of the scenic features of downtown KC. You get to see downtown, the P&L, WWI monument and the Plaza. It was a nice place.

The aid stations -- Every 2 miles, like clockwork. They were great.

The crowd -- Pockets of people, but where they were located, it was a lot of them and it was great.

The expo -- BIg with lots to do and see. Lots of swag to pick up.

The swag -- One of my favorite race shirts. It has a great logo and look. I wear it frequently. The medal is a nice one, very large, and they distinguish between the races. Good stuff. Oh ... and free race photos! They are yours! You get an email and can download the ones with you in them, no extra fee! Love that.

Overall, I would run this race again, it was fun. My wife didn't enjoy the hills, but other than that it was a good one.

Link to this review
Login or sign up to leave a comment.
Michael Mason-D'Croz recommends this race
(2015)
"Back in the days of the 5k"

I did this race three times -- while managed by BRIN -- and ran the 5k (no longer offered) each time. This course is incredibly flat and fast. And at the end of the race, there was delicious BBQ dinner for all. This is a good race. As a dusk run (Harvest MOON) it means it can get dark while you're out there, so plan accordingly.

The course -- The course is an out-and-back course on the MoPac trail. This trail is incredibly flat, and that makes for a fast race. The surface is a nice soft crushed gravel and the trail is wide enough to pass (or be passed), so you can really push yourself. On my last time running this race, I was able to push myself to a new 5k PR.

Aid stations -- Being a 5k/10k (and now only 10k) the aid stations were basic, but that is really all you need. This race is not a "full-service" race. It is meant to go fast. So the aid stations had water and Gatorade. No frills, no problems.

Swag -- One of my favorite shirts, orange with black writing and super comfy. I wear them all the time. No medal -- but it's just a 5/10k, so did you really earn one if you didn't place? So no problem there.

Meal -- After the race, there is delicious BBQ sandwiches, beer and a full party with a band. This comes with the registration, and it is awesome. Why not celebrate a fun night run with some delicious food?

Link to this review
Login or sign up to leave a comment.
Michael Mason-D'Croz recommends this race
(2015)
"Great Half" 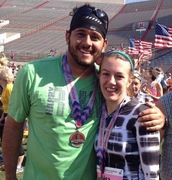 This is one of the best run marathon and half marathons in the midwest. Tons of support on the course, and some of the best aid stations on any race course I've ran. Not only that, but the weather is usually pretty darn nice.

The time -- This race is run every May on the Sunday before Mother's Day. This means that usually the weather is great. With typical highs in the mid 60s or lower 70s and starting temps around 40-45 degrees. This race is in the perfect time of the year.

The course -- The half marathon course is one of the best I've ran. As a looped course that lets you see a lot of the city and experience tons of great fan support. Relatively flat, but with a couple of decent hills to tackle.

The fans -- The course is covered with fan support. The city of Lincoln comes out in droves to support the runners and keep you motivated. Not just at the aid stations, but all along the course you'll find people cheering you on. It's great. It is really hard to lose motivation to run while on this course.

The swag -- You get a t-shirt. However, the organizers usually choose an awful design for the shirt, which relegates it to an occasional -- if that -- wear. Although in 2017, the design was nice, and totally a shirt people wear all the time.

Overall -- This is a great race, and totally worth running. Sign up for it now, it sells out every year.

This race is now called the Half Hastings and they no longer offer a full marathon option. There is a reason for that ... in fact, they only offered the full one year, and there is reason. I'm sure the half and the 5k are better races and better experiences, but this one was not a very positive one for me.

Now, let's start off with excuses for the following review:
1. It was the first year (and only) running a full marathon
2. Severe storms over night and into the morning that pushed the start back by two hours
3. Small race, small(er) city

The Expo -- The night before, the expo was at the city middle school. It was easy to check in and get your stuff and there was a nice little spaghetti feed that made sure you were full before leaving. There was no real "expo" in that there weren't vendors or booths. You checked in, and got free food. No frills, but nice.

The Course -- This was the confusing part. This course literally went up one street, then back down the next block for around 9-10 miles before you cross the highway to the lake area. It was too much. Once crossed over the highway and by the lake you get your first glimpse of the finish line and then run by it as you make your way into the neighborhood for another 2-ish miles, then you run by the finish line a second time. Then you go back through the neighborhood -- here is where I got lost because there was no volunteers and the course was marked with chalk ... which washed away with the overnight/early morning severe thunderstorm. So I went an extra half mile up the road before a man who was mowing his lawn directed me back to where I was supposed to turn. After running this entire neighborhood you make your way out onto a country road ... but not before passing the finish line another two times, without crossing it ... to head up to another neighborhood to run through. Then back to the country road, and another neighborhood, then down by the golf course and then back. In total, you run by the finish line four times before you're allowed to cross it on the fifth. Very disheartening ... not to mention the added mile.

The Aid Stations -- The stations were equipped with water and sports drink. Good. However, they missed one station. There was no aid station set up between miles 19 and 23. That station is vital, and it was missing. That sucked, a lot.

The Crowd -- There was none. I actually had multiple people ask me why there were people running in the street. It did not have a following.

The Swag -- The shirt is nice, and I still wear it frequently. The tote bag was a great one, I loved it, but after three years it finally gave out. Not a bad product for what it was. And the medal was OK, but disappointing that all of these goodies were the exact same as those given to the half marathon runners. I feel that there should be a distinction.

Overall -- There is a reason they scrapped this level of run after the 2014 race. It was not well run, and many things went wrong. I want to give the benefit of the doubt, but it's hard on this one. Since this race, they have rebranded and dropped the 26.2, but this one was not good. Sorry.