Johnny recommends this race
(2017)
"It's ok but I gotta have more cowbell!" 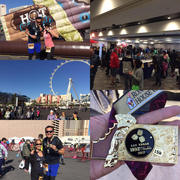 ​
After reading past reviews of the inaugural 2016 Hot Chocolate 15K in Las Vegas, it was quite clear that there was much room for improvement in 2017. This would be my first hot chocolate race so I was looking forward to see if any changes had been done to bring it up to par with other hot chocolate races in other cities, which I hear are pretty awesome. The main "complaints" from the prior year, were that the expo was hard to find, there wasn't much to see/do at the expo, not enough crowd support and a lackluster course.

Expo - The layout at the Linq casino made it a little hard to find the expo, wish there was better signage as to where the expo was being held. The expo itself had plenty of volunteers manning the various tables. They had a handful of vendors, a chocolate booth... small but quaint. The whole process of picking up the race bib, swag and walking around probably took only about 30 min.

Race Day - Sunny 41 degrees
I arrived a little after the recommended time for the 15K and could see the 5K finishers completing their race. I had plenty of time to drop off my gear check bag, warmup and go to the bathroom. There was plenty of porta potties and there didn't seem to be as many people at this race as you would expect. I do wish there would have been some pre-race hydrations stations.The various corrals which you are assigned to are easily accessible and marked accordingly.
The race started on time which was good because in previous reviews, I had read that it had started late by like 15 min. The first quarter mile goes through the Linq promenade which is a pain because it becomes very narrow which causes a bottle neck where you are trying to get around runners while trying to avoid hitting various objects from the various shops around the promenade.
The course itself isn't really much to boast about. If you are looking for scenery, this is not the course for you; You hardly get to run on the Las Vegas strip. Most of the course is flat except for a part in the middle where you have to run on an overpass twice (out and back). Take it easy getting over that overpass. I saw a lot of people take it too fast and burnout once they hit the top. There were various hydration stations and a marshmallow station along the course however almost no crowd support. I will say this, even though there wasn't much crowd support the volunteers at the hydration stations really cheered you on. Oh also there were various volunteers to direct you along the course, to keep you from getting lost.
Once you finished the race, you got your chocolate bar medal (very nice) and your chocolate mug with various edible goodies. There was music playing, a podium and a giant inflatable chocolate bar to take pictures with.
The start/finish line are in a large, empty parking lot so it would be nice it there was chairs or tables for people, while they are enjoying their chocolate mug. I did enjoy the hot chocolate and the thick chocolate that was used for dipping marshmallows and pretzels among other goodies.

I really expected more people but I do know of at least 3 other running events that went on this weekend so that could have affected it. I think I would do this race again because I would want to see if they continue to improve upon it, plus come on, the swag! I know Las Vegas is a big draw to some folks as a racecation however, full disclosure, I live in Las Vegas, so that is not a factor to me. The reason why I gave this race 3 stars is mostly because of the swag. I do like wearing the jacket and come on, you just have to have a medal of a chocolate bar with a bite taken out of it. I will definitely have do a Hot Chocolate race in another city since I have nothing else to compare it to.