Sara recommends this race
(2016)
"Beautiful Race for a Good Cause"

I have participated in the half marathon distance of this race for the past two years and had a wonderful experience both times. For both of these races, I stayed in the official race hotel. The hotel is beautiful and less than a half mile walk to the start line. For those who are commuting, the parking is close and plentiful. Packet pick up was smooth and easy and is offered on race morning as well as at the expo.

I enjoyed partaking in the pasta dinner offered at the race hotel both years. Each year they bring in a variety of people to speak at the dinner. This year's speaker was Bart Yasso.

The start line of the race was easily accessible and well organized. The out and back course was well supported with traffic control and aid stations. Each aid station was presented by a different group volunteering their time and as such, each was like its own little party with music, signs, themes and plenty of encouragement. There were a few fairly large hills toward the middle of the course, but it was mostly flat at the beginning and end. The scenery of this race is absolutely gorgeous. It starts in the middle of town, but quickly tracks onto country roads with a view of the Wichita Mountains on the way back to the finish. It was a smaller race, so not terribly crowded. I felt like I could quickly find my own pace without doing a lot of bobbing and weaving.

The medals at the finish line were very nice and the post-race food and drink were immediately available.

I love everything about this race and will definitely be running in it again!

Link to this review
Login or sign up to leave a comment.
Sara recommends this race
(2016)
"Run to Remember"

I have participated in this race in the half marathon, marathon and kids marathon divisions. It has been an excellent experience every year. The expo is well organized and packet pickup is a breeze once you get in. Parking downtown does require an $8 fee at the convention center, but you can usually find cheaper parking in nearby lots and on streets depending on when you attend the expo. There are many quality vendors at the expo offering a variety of products, services and information.

Living nearby, I have always driven or gotten a ride to the race. It is good to arrive early to be sure to find parking and be able to walk to the start line. I have checked gear for two years, and it has always been quick and easy to drop off and pick up. A church near the start line opens up for runners and spectators on race morning with a free pancake breakfast from 6am-10am and nice, clean indoor restrooms. The parishioners are friendly and welcoming. It is wonderful to have a nice place to rest and change clothes post race.

The atmosphere of this race is very meaningful. From the early morning remembrance ceremony to the moment of silence and the firefighters walking in their full gear to honor their fellow first responders, it is truly a race to remember.

The course is moderately hilly, but not terribly so. It is well supported with many well stocked aid stations along the way. There is an abundance of crowd support for nearly the entire course with plenty of fun and encouragement. Medical aid stations are frequently available and the medical support at the finish line is excellent. (I have friends with first hand experience, but thankfully not myself...yet). The finish line provides a great party-like atmosphere with plenty of celebration for the first finishers as well as the runners coming in past the 6-hour mark. It is a great race for all skill levels and abilities to feel supported to the end.

Link to this review
Login or sign up to leave a comment.
Sara recommends this race
(2016)
"St. Patrick's Day Fun!" 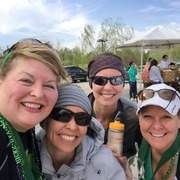 The Run Lucky 5K was an excellent experience! I cannot comment on the quality of the expo because a dear friend spared me the trip to the city with kids in tow and picked up my packet for me. This race had a 2pm start time, which worked well for early March and let participants sleep in a little. I am a parking weenie, so I loved that this race had plenty of parking near the start and finish line. On this blustery day, it was nice to be able to grab my jacket after the race while I waited for the awards ceremony and enjoyed the after party. The course was nice to run and closed enough to traffic that I felt safe. There were several challenging hills made even worse by the 25 mph winds on this particular day, but it is Oklahoma! I enjoyed the challenge of the hills, but it definitely increased the difficulty of the race. The long sleeved race t-shit was attractive and good quality and it was fun (and unexpected) to receive a finisher medal for a 5K. The after party at the finish line was a lot of fun with music, free beer, race food, cookies and awards. The awards given for the first 3 finishers in each age group included a nice pint glass and gift cards to the local running store.

I was disappointed in the availability of the porta potties at the start line. They were not located in a very obvious location. My friends and I actually stopped into a local grocery store for our pre-race relief because we were not able to find them. I also did not like that the one water stop handed out full size plastic water bottles. It was too much for a 5K as well as difficult to open on a run. So many mostly-full water bottles were thrown to the side creating a lot of waste and tripping hazard.

Overall this was a fun, well-managed race that I look forward to participating in again!

Link to this review
Login or sign up to leave a comment.
Sara recommends this race
(2016)
"Fun with the Girls!"

I have participated in the GoGirl Run OKC for two years and I thoroughly enjoyed both races. The GoGirl Run has such a great "girl power" vibe and supportive atmosphere. There is a lot of camaraderie and it makes for an excellent first half-marathon. Although there were plenty of very fast runners in the pack, it did not feel super-competitive and emphasized the accomplishment of finishing and feeling strong over time and winning.

The course was pretty, but largely ran through neighborhoods and side streets that did not require a lot of volunteers for traffic control being on a Saturday morning. It included moderate hills, but ended with the downhill side of a bridge and flat stretch to the finish line. The aid stations were sufficiently located, but I used my Orange Mud Hydraquiver for hydration so I cannot comment on the quality of the hydration drink offered. There was a decent amount of crowd support, but not as much as other, larger races.

The t-shirt offered was high quality. Post-race, runners were given a VERY large (and sparkly) medal to commemorate their accomplishment as well as a race branded wine glass and a certificate with their finishing time. Healthy smoothies were available for runners as well as the usual post-race fare (bananas, oranges, bagels). I really liked that GoGirl offers free race photos. A couple days after the race, I received a link to my photos and was able to download them at no cost. I thought that was a really nice perk.

Overall, this was a fantastic race, but there were a few cons. First, the traffic control on the course was not as tight as I would have liked. Although there were volunteers controlling traffic at many of the major intersections, there were several smaller intersections without any controls so runners had to be extra aware of traffic when crossing the streets. Medical aid was not readily available. I had a friend who was having significant pain part way through the race who would have asked for help if she could have found some. There was not medical aid at the finish line that I could see.

I would definitely run this race again. It is only in its second year in OKC and this year was even better than the first. I look forward to participating with my running buddies again next year!

Link to this review
Login or sign up to leave a comment.
Sara recommends this race
(2013)
"Family Fun for My First Half Marathon" 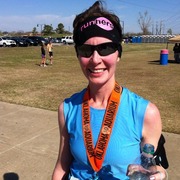 I chose the Aquarium Run as my first half-marathon because it was a smaller race and felt more accessible to me as a novice runner. I liked that the parking was easy to find and right next to the start line. It allowed me to leave my extra gear in the car and have easy access post-race. The course ran from the Aquarium along the river trail and back the same way. The trails were a little bit narrow at some points, especially when runners passed the turn around and were running in both directions, and the trails were not closed to recreational users. The aid stations were readily available and offered PowerAde as well as water. Port a potties were only available at the start line and the turnaround point. The scenery of this race was very beautiful as it followed the river for most of the duration.

Post-race, the Aquarium offered free admission to all runners. My family took this as an opportunity to make a family getaway weekend out of my race. I liked that this race was held on a Saturday morning because my husband is a church organist and Sunday races are difficult for him to attend. For my first half-marathon, it was important to me to have my family there.

Overall, this race provided me with a wonderful first half-marathon experience. I liked the smaller feel of this race and the scenery. It really allowed me to meditate on my run and enjoy the calm. However, those who enjoy the energy and support of a large crowd would probably be disappointed. There were a few supporters cheering on specific runners, but not a lot of space for spectators to cheer from the sidelines.