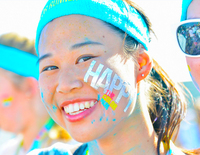 Write a Review
What did you think of the race? Share your thoughts! Write a Review
John Niedzwiecki recommends this race
2016
"Tropicolored Fun"

The Color Run offers several levels of registration. This is a nice way to do it. If you just want to enjoy the race, they have the Classic Color Runner, which includes your bib, a sweatband, some tattoos, a t-shirt, and your finishers medal. Don't want to bother with race morning pickup? You can select the Classic+, which gets you the Classic Kit delievered right to your door ahead of the race. I did not get this with my registration, but for things I will mention later in the post, would have really appreciated it. The third option is the Deluxe Color Runner Kit, which includes the Classic Kit, the shipping, and some additional swag. In the Deluxe kit, you also receive a hat, a lei, and some TCR sunglasses.

I received a swag pack, the same as the one I gave away, which was also very similar to the Deluxe kit. The swag was all pretty nice. The shirts were very soft and comfy, something I love from a race shirt. The sunglasses were alright, better than your standard cheap type you see in that style, where anyone slaps their logo on. They've held up to my 4 and 2 year olds wanting to wear them, so that says something for them. The finisher's medal is good as well, a nice addition from the last time I ran the Color Run (which had no medal).

I did not have my packet mailed to me, so had to do race day pickup. Pickup was very easy, one set of lines for your bib then onto the next tables for your swag. There was one hiccup. Parking was a little at a premium at the park, so I was parked a little further away. This meant no time to take everything back to my car. The race only allowed for clear bags to be brought into the complex. All communications leading up to the race mentioned that you could buy a clear drawstring bag for a small fee that would go to the children's charity. Unfortunately, there were no bags. They did the best the could by offering simple shopping bags for free to hold your stuff, but it made for a slightly awkward running experience. Had we known, we would have brought our own, however planned to buy one to support the charity. I guess next time, bring one to be prepared.

The race course wound around the grounds of the Camden Yards Sports Complex. The course looped around Oriole Park at Camden Yards as well as M&T Bank Stadium. The route was all paved parking lots and sidewalks. This made for some hot running. The day would top out at 98 °F with 97% humidity. We had some shade, depending on the side of the stadium we were on, but the heat was rough. We carried water with us, plus there were several water stops on the course. After running the initial bit, we decided to walk the rest and play it safe in the heat. The number of color stops on the course was really great. Each station had a different color, followed by the last having several. The amount of color you'd get in each stop really would depend on the volunteer at that time, though if you didn't get enough for your liking, you could simply ask for a little more (which I did on one occassion. They were good about not being overzealous, for those that may not have wanted to get quite as colorful. Despite the heavy heat, we had a fun time. For a race like this, it is what you make of it. The one improvement I would suggest to the course would be some more music. The start line and finish line had music, which at times you could hear when the course wound close enough. Simply running some speaker lines out to the course and pumping the same music would be enough to keep it fun and lift some spirits, in conditions like these. The "party-like" atmosphere they keep would be a good fit for this as well.

While other races have a great pre-race experience in expos, one of the things they do well at the Color Run is the post-race party. They usually team up with some companies, so there are plenty of snacks (like KIND bars) and water. They always have a stage with a DJ set up for a colorful party. They throw out Color Run swag into the crowd as well as color packets. Then they'd build to a countdown to throw the color into the air. It can be a lot of messy fun.

In addition they have photo spots set up where you can get your picture taken with various backdrops and props, themed to the race theme, such as a giant Color Run Pineapple. These were obviously available for before or after, as well as some well received water balloons. If the free snack items weren't enough, there were several food stands available, everything from pulled beef and sausages, to orange aide, lime aide, and the favorite of the day, Hawaiian Shaved Ice.

Easy flat course for a fun 5K. Room for improvement, but a good all around experience.