Write a Review
What did you think of the race? Share your thoughts! Write a Review
Tom recommends this race
2015
"Running, Music, and Beer" 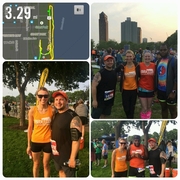 In 1995, the Grateful Dead played their final show of the season at Soldier Field in Chicago. A week later, my friend Greg and I went to a Pearl Jam concert at Soldier Field with our girlfriends. We showed up early because we wanted to tailgate, and when we got there, we were surprised at the number of deadheads that were still there a week later because.... well because the tour was over and they really didn't have anywhere else to go.

There were tents and pop-up trailers scattered around the Soldier Field parking lot with some people just kinda hanging out and others selling food and artwork. We met a few new friends that night. We ate and drank with some people, hung out and chatted with a few others, bought a trippy looking psychedelic painting from a guy in a camper, repeatedly said no to some people in robes who wanted sell us literature about the cult that they belonged to, and topped the night off by drinking beer with a group of cops as the concert was letting out.

Greg and I figured that if hanging out in the Soldier Field parking lot a week after a Grateful Dead concert was that much fun, actually going to a show had to be incredible. So we decided that we would go see the Dead when they came to Chicago the following year. Unfortunately, that never happened. Exactly one month after the final Grateful Dead show in Chicago, Jerry Garcia passed away and the band broke up.

After that, most of the deadheads went their separate ways. Some started following other bands like Phish or The Dave Matthews Band. Others went out and got regular ol' 9 to 5 jobs or figured out other ways to spend their time.... Things were never the same for deadheads again, and whenever I think back to that evening, it always kind of feels like even though we didn't know it at the time, Greg and I were actually witnessing the waning moments of an entire subculture.

In 2015, 20 years after their final tour and 50 years after their first, the Grateful Dead announced that they would do one final tour, which would start in Santa Clara, California and end in Chicago, which was the location of Jerry's final show. To coincide with the Dead's Fare Thee Well tour, Running Away Multisport Racing also announced that for 2015 only, they were resurrecting their old Grateful Dead themed Terrapin 5K Race and Music Festival.

The Terrapin 5K used to be a popular nighttime race in Chicago that started and ended in the Soldier Field parking lot and had an out and back course that went along the lakefront path. Afterwards, there was a big post-race party that featured live music for several more hours. The problem was that RAM also had a similar event called the Rock the Night 5K, which was held in Grant Park and also featured live music. The two races seemed to compete with each other for participants even though they were run by the same organization, so RAM ultimately made the decision to combine them into one big event. This year was different though. Not only did RAM bring back the Terrapin 5K, but they timed it perfectly. It was held on the Thursday night before the final Dead shows in Chicago.

Aside from the theme and the great timing, there were a lot of other things to love about this race. The original course headed south on the lakefront trail and then turned around and headed back north.... just like about 20 other races in Chicago. I've said this before - running the same course over and over again gets boring after a while (not to mention the fact that it's pointless since people who live in Chicago can run on the lakefront trail for free anytime we want). This year though, the race organizers changed things up a little bit. The course started in Grant Park, headed under Lake Shore Drive towards the Museum Campus and then north towards downtown. Runners turned around at Monroe Harbor (which was about the one mile mark), headed south towards the Museum Campus, and then back into Grant Park where they did a half circle shaped loop through the area where the softball fields were and finished alongside Lake Shore Drive. This was a refreshing change that made this race a lot of fun to run.

The course had one water table that was right at the halfway point. Normally the weather in Chicago at the beginning of July is pretty hot and muggy, so any other time I would have said that they should have had two. Race day was unseasonably cool this year though and with the race only being a 5K, I think one was just fine. For being a smaller race, there was also a lot of crowd support.... and anyone who has ever done the Terrapin 5K knows that the best part of the event has always been the post-race party. There was plenty of live music, craft beer, Lou Malnatti's Pizza and the opportunity to mingle with a few deadheads who showed up for the concerts a little early. I also got to hang out and have a couple beers with some friends for a little while after the race, which is really what the overall theme of the event was about. I had a great time.

There's no finisher's medal for the Terrapin 5K, which is not uncommon for 5Ks. The original race didn't have finishers medals either. Runners got a tie-dyed technical shirts and hats. I had requested that mine be mailed to me ahead of time so that I wouldn't have to deal with packet pickup and when it arrived, my daughter Sara promptly stole the shirt and made it into a nightgown. It looks pretty comfy.

I always kind of missed the Terrapin 5K. I know that bringing it back was just a one time thing to coincide with the Grateful Dead shows, but if the folks over at RAM were to ever announce that they were bringing it back permanently, I would not be sad.