Write a Review
What did you think of the race? Share your thoughts! Write a Review
Jane recommends this race
2014
"A new found hatred of bridges but a LOVE of NYC" 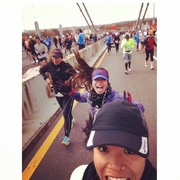 Definitely a must do bucket race experience for every runner.

I failed at getting in via lottery 2-3 years in a row so I finally did New York Road Runners 9+1 guaranteed entry: I did 9 races + 1 volunteer opportunity.

Expo
The expo runs from Thursday through Saturday and every resident NYC runner will say pick it up on Thursday so thats what I did. I picked up my bib in between work and school on Thursday afternoon. It was oddly packed. I never do any expo shopping but I picked up some stuff from SparklySoul and Nuun. It was bigger than last year's expo (which I volunteered at). I picked up my bib and shirt which came in a bag with a few things - most useful is the cell phone container for credit cards and IDs.

The Morning Of
Depending on start time is the time you were scheduled for the ferry from Manhattan. Logistically the start works like this: Wave (1,2,3,4) -> color (orange, blue, green) -> corral (A,B,C,D,E,F). Wave tells you your start time, color tells you where you are on the bridge (top right, top left, bottom) and corral tells you what order in your wave and color.

The sis and I were scheduled for the 8:30am ferry from Staten Island with a 10:55am start. I set my alarm for 7:10am and ended up waking up an hour earlier. I laid in bed until I had to get up then got up. We ended up leaving my apartment at 7:30 and getting to the ferry at 8am so we had time to use real bathrooms and get some heat.

We got on the 8:30am ferry and docked around 9am and hungout in the warm terminal until 9:30, got on a bus which felt like it took forever and got to the start village around 10:10am. Security was tight - it was just like airport security. The sister and I didn't do baggage so we just hungout but time went by fast. The start village was so large, it basically felt like we immediately got off the bus and got into corrals. We did get to see wave 3 start which was cool. There was free water, coffee, gatorade, bananas and bagels somewhere and we found them but there was just gatorade left.

The Race
Miles 1-6
I already planned not to take pics because nothing would capture the awesomeness of this marathon. The sister and I started together - both in the orange corral (top of the bridge). The bridge, like much of this race, was insanely windy. We lost each other after the Verrazano but we took some good pics together.

After the bridge, it seemed less crazy. The crowds of Bay Ridge were out cheering but because there are 4 waves of 3 colors - blue and orange (on the top of the bridge) with green (bottom of the bridge), the three colors had separate courses after the bridge and met up around the 5k (3.1 mile) mark, which then seemed to get crazy loud.

At this point I felt good, took it nice and slow but kept feeling this weird pulsing from my left shin and left foot. It's hard to explain but it never felt painful.

Mile 6-10
I think this was my favorite part of the course - because I live here! Between mile 7 and 8, my boyfriend caught up to me - he ran right up next to me in his jeans. Apparently I didn't hear him calling my name.

Because the roads get smaller in the Clinton Hill part (miles 8-10), the crowds seem to close in so it just seems really surreal to have all these people cheering for you.

Mile 10-13
I started to get tired around mile 10. At this point I stopped to stretch every mile since my tight calves were acting up.

I hit mile 13 and was like wow, now I can't go back....I've got to finish. My fear of not making it kinda went to the side at this point. Mile 13 and 13.1 were on the Pulaski bridge which is a "mini-bridge" but more elevation nonetheless.

Mile 13-16
OH HEY ANOTHER BRIDGE. This part from the Pulaski Bridge through Queens and up the Queensboro Bridge was painful. The wind came out of nowhere in Queens. The Queensboro's elevation didn't seem to stop and it was just long yet since we were on the bottom half of the bridge, it shielded the wind a bit. The views from both bridges were great though - Pulaski had a great view of the Manhattan skyline and so did Queensboro.

Mile 16-19
It seems that everyone loves this part of the course and it was cool but I kept thinking about the impending doom that was the Bronx (the part of the course where the crowds thin out and it gets quiet like Queensboro but there isn't great scenery). So I tried to enjoy this part but the WIND. At one point I just stopped and somehow got moved a foot over. It was just insane at this part.

Mile 19 -22
ALL THE BRIDGES! Small but they were still bridges in my book. Slowest miles ever. Plus I was counting wrong - thinking oh it's just 4 more miles when it was really 5 more.

Mile 22-26
I clearly didn't study the end of the course map correctly. I kept thinking we'd enter the park at the top of the park around 110th Street, instead we entered around 86th street. I thought the rest of the course was IN the park but didn't realize the last mile takes you out of the park again to Columbus Circle then back into the park for the finish.

I was looking at my clock and I took my sweet sweet time, so much so that the sun was starting to set. This was a weird experience for me. I've never finished a race right before sunset.

Post-Race
When I finished there was still light out by the time I got my awesome cape, it was dark out. I got my medal after a short walk, then got a heating blanket then got some food (which was a bit of a downgrade considering past runners said you got an awesome keepsake bag with a ton of food - there was water, gatorade, an apple, pretzels, a protein bar and some protein shake in a plastic bag which you wouldn't use again, maybe I misunderstood). The walk to the cape took forever. I couldn't believe how long it was.

NYRR puts together a logistically crazy race together so well. I mean you literally shut down NYC for this - 50,000 runners is a lot and the amount of security and cops and volunteers is enormous. It's such an amazing race. I cannot wait to do the race again next year. My quads may say otherwise especially with those hills!