Write a Review
What did you think of the race? Share your thoughts! Write a Review
Jenny recommends this race
2015
"Run over the Golden Gate Bridge" 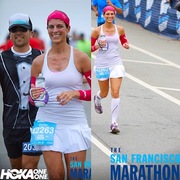 This was my second year in the row running the first half marathon. This year it was our wedding race as last year my husband & I had our first date the day before and this year we would get married the day after.

My head wasn't really in the game, race wise, because of the wedding but I do enjoy this race.

Expo: Friday & Saturday at the Fort Mason Festival Center
Decent in size with a lot of vendors, we were able to sample a lot of food
It was a bit crowded when we got there and the bibs/shirts are at the back of the expo hall so you have to walk thru all the vendors to pick up your bib.

If you register early enough you can have your bib personalized and they had different colored long sleeve shirts for each distance. I got a orange shirt for the half and my husband got a red shirt for the marathon.

Race App: They had a race app, which was decent, giving you the option to track runners, it also gave you more info on the various activities surrounding the race.

Race Options: There are a lot of different distances that you can run in this race. Ranging from 5k to 2 half marathons and a marathon there is an option for every runner.

Course: The first half starts on the Embarcadero, goes down by Fisherman's Wharf, up a hill near Fort Mason, down to Chrissy Field, up another more intense hill to the Golden Gate Bridge. Then the best part of the race is going over the Golden Gate Bridge around the rest area and then back across. From there you run thru Golden Gate Park for a while and finish around the rose garden. Note on hills, this is a relatively hilly course, but the hills that are in the first half aren't the worst that SF has to offer. They are relatively runable.

Photographers: There were a lot more photographers on the course this year. Around Chrissy Field, on the bridge, at the finish line. They also provide free race photos, this year sponsored by Hoka One One.

Finish Line: There was a decent finish line party. You finish, get a bottle of water before walking around the finish line to get handed your medal, or if you got lucky there was someone willing to put it around your neck :), a custom SF Marathon race blanket, it's cold in SF :). The UPS trucks were there to get your gear (there was quite a line when I got there) and then there was an area to get your post race food. This year was much better than last year, I got 2 Perfect Bars, Muscle Milk, a banana and they had coconut water too. Last year was just muffins and box water.

When you run the first half, you are quite a ways from the start line so they have school bus shuttles there to transport you back to the starting area. They had a good set-up in that they had volunteers there to count off the runners and get the correct number of people on the buses before they took off. It was a decent trip back to the Embarcadero.

Medals: They had a similar sized medal to last year, the marathon is significantly bigger than the half and both had a nice picture of the Golden Gate Bridge.

All in all it was a great race with good organization and I enjoyed it. For more specifics on my race, check out my full recap on my blog at http://runny-legs.com/2015/08/teamseanandjenny-run-the-sf-marathon/.